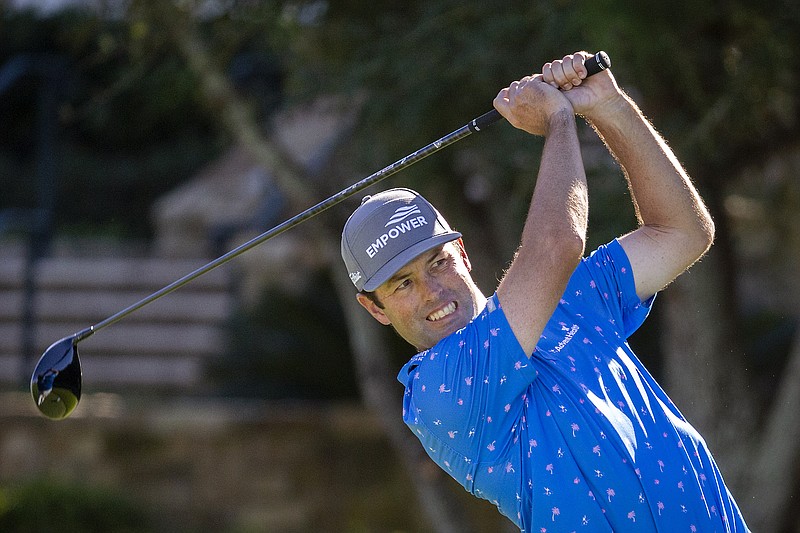 Robert Streb watches his drive down the 10th fairway during third round of the RSM Classic golf tournament, Saturday, Nov. 21, 2020, in St. Simons Island, Ga. (AP Photo/Stephen B. Morton)

Robert Streb kept his game from coming undone over the first hour Saturday, and then pieced together enough birdies for a 3-under 67 to build a three-shot lead going into the final round of the RSM Classic in St. Simons Island, Ga. Streb came from five shots behind when he won at Sea Island six years ago, his only PGA Tour title. This time, he has a lead over Zach Johnson (65) and Bronson Burgoon (67). Streb was at 17-under 195. Camilo Villegas pulled within one shot on the lead going to the back nine of the Seaside course until a two-shot swing at the 10th that cost him momentum. Streb hit his approach to 8 feet for birdie. Villegas was just on the fringe 15 feet away, ran it by 5 feet and missed that to fall three shots back. Andrew Landry (Arkansas Razorbacks) is tied for eighth place entering today's final round. Landry shot a 5-under 65 on Saturday and is at 11 under for the tournament. Sebastian Cappelen (Razorbacks) is tied for 62nd place at 2 under.

Sei Young Kim answered Ally McDonald's ace with a late birdie run to open a five-stroke lead Saturday in the Pelican Women's Championship, the South Korean's first event since winning the KPMG Women's PGA in October. The second-ranked Kim shot a 6-under 64, birdieing Nos. 14-17, to get to 14-under 196 at Pelican Golf Club in Belleaire, Fla. McDonald shot 68. She had the hole-in-one on the par-3 12th and birdied the par-5 14th to get close to Kim. The American dropped a stroke on the par-4 16th. Kim's victory last month at Aronimink was her 11th on the LPGA Tour and first major title. Maria Fassi (Razorbacks) shot a 71 on Saturday and is at 4 over for the tournament. Stacy Lewis (Razorbacks) turned in a 74 and is at 9 over after three days.

The Cincinnati Bengals have placed running back Joe Mixon on injured reserve with a foot injury. The announcement on Saturday means backup Giovani Bernard will start for the fourth consecutive game when Cincinnati faces Washington today. Mixon, a fourth-year player, suffered a right foot injury in the Week 6 loss at Indianapolis and has been week-to-week. Prior to the injury, he carried the ball 119 times for 428 yards and 3 touchdowns, and also had 21 catches for 138 yards and another TD.

Tennessee Titans outside linebacker Jadeveon Clowney has gone on injured reserve as he deals with a knee issue. The Titans said Friday that Clowney wouldn't play in today's game at Baltimore. They placed him on injured reserve Saturday, meaning he must miss at least three games. The knee injury had caused Clowney to miss a 24-17 victory over the Chicago Bears on Nov. 8, though he returned to action four nights later in a 34-17 loss to the Indianapolis Colts. Clowney, the No. 1 overall pick in the 2014 NFL Draft, hasn't recorded a sack since signing with the Titans on Sept. 7.

The Los Angeles Chargers have placed linebacker Kyzir White on the covid-19 list and called up three players from the practice squad Saturday. White is in his third season and is the Chargers leading tackler with 68. The covid-19 list is for players who either test positive for coronavirus or have been in close contact with someone who has been infected. Los Angeles also activated linebackers B.J. Bello and Cole Christiansen along with safety Jaylen Watkins from the practice squad.

The Las Vegas Raiders have activated seven players off the covid-19 list after they missed practice this week as "high risk" close contacts to a teammate who had tested positive. Safety Johnathan Abram, defensive tackle Maliek Collins, defensive tackle Johnathan Hankins, cornerback Isaiah Johnson, defensive end Arden Key and defensive tackle Kendal Vickers all were activated Saturday and are on target to play today against the Kansas City Chiefs. Defensive end David Irving also was activated from the practice squad covid-19 list and activated from the practice squad. Those players still need to get negative tests back today before they can be cleared to play.

The New York Jets placed cornerback Bless Austin on injured reserve Saturday, another tough blow to their already thin and inexperienced secondary. Austin injured his neck in practice Wednesday. He sat out Thursday, had an MRI and was cleared to practice Friday. The second-year cornerback participated on a limited basis and was listed as questionable, but he was expected to be able to play today at Los Angeles against the Chargers. The 0-9 Jets head into the game with five healthy cornerbacks, three of them rookies.

The Jacksonville Jaguars activated veteran cornerback D.J. Hayden from injured reserve Saturday and expect him to play significantly today against Pittsburgh. They waived safety Doug Middleton to make room on the roster. Hayden missed the last three games because of a strained hamstring. His return comes days after the Jaguars (1-8) placed rookie cornerback CJ Henderson (groin) on injured reserve. Hayden, Tre Herndon and either Sidney Jones or rookie Chris Claybrooks are expected to start against one of the NFL's best receiving corps. Jones (Achilles tendon) is questionable for the game.

Petra Vlhova held on to her opening-run lead to beat Mikaela Shiffrin on Saturday in a women's World Cup slalom in Levi, Finland, that was the American's first race in nearly 10 months. On a course set by her coach, Livio Magoni, the Slovakian also posted the fastest time in the second run and extended her advantage over Shiffrin to 0.18 seconds. Austria's Katharina Liensberger was 0.57 behind in third, while the rest of the field, led by Swiss racer Wendy Holdener, was at least 1.35 off the lead. Shiffrin hadn't competed since January, as her previous season ended prematurely after the death of her father, Jeff Shiffrin, followed by the cancellation of the season-ending races amid the coronavirus outbreak. She sat out the first race of the new season in Austria in October with a back injury. Vlhova trailed Shiffrin by 0.13 at the first split but was ahead of the American at all following check points before finishing 0.15 ahead. In the final run, Vlhova initially extended her lead to 0.52 but lost over three tenths as she failed to match Shiffrin's pace in the flat finish section. 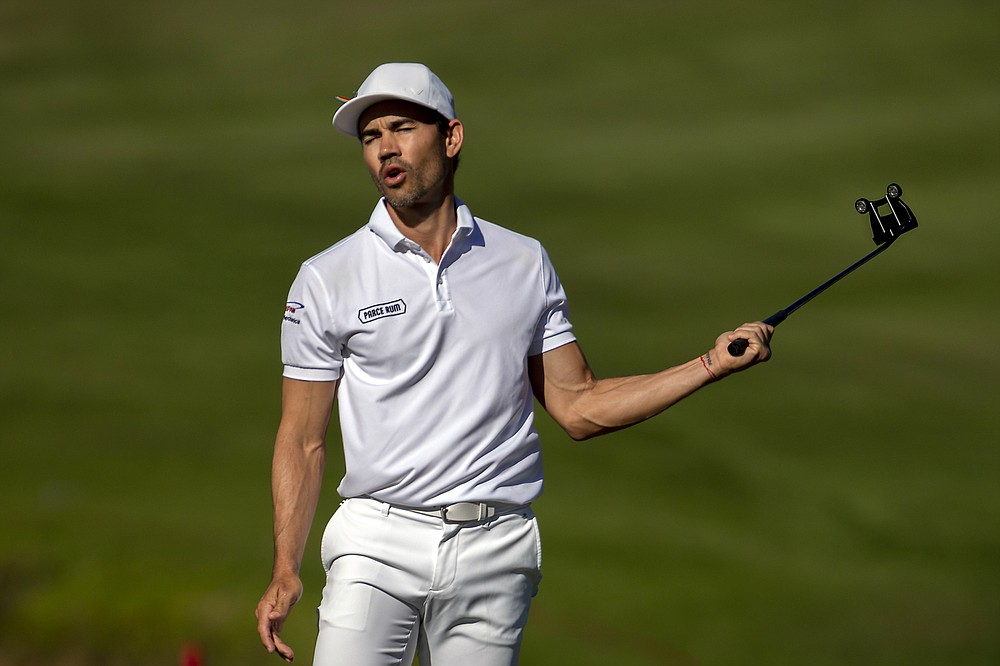 Camilo Villegas, of Colombia, reacts after missing a birdie putt on the ninth green during third round of the RSM Classic golf tournament, Saturday, Nov. 21, 2020, in St. Simons Island, Ga. (AP Photo/Stephen B. Morton) 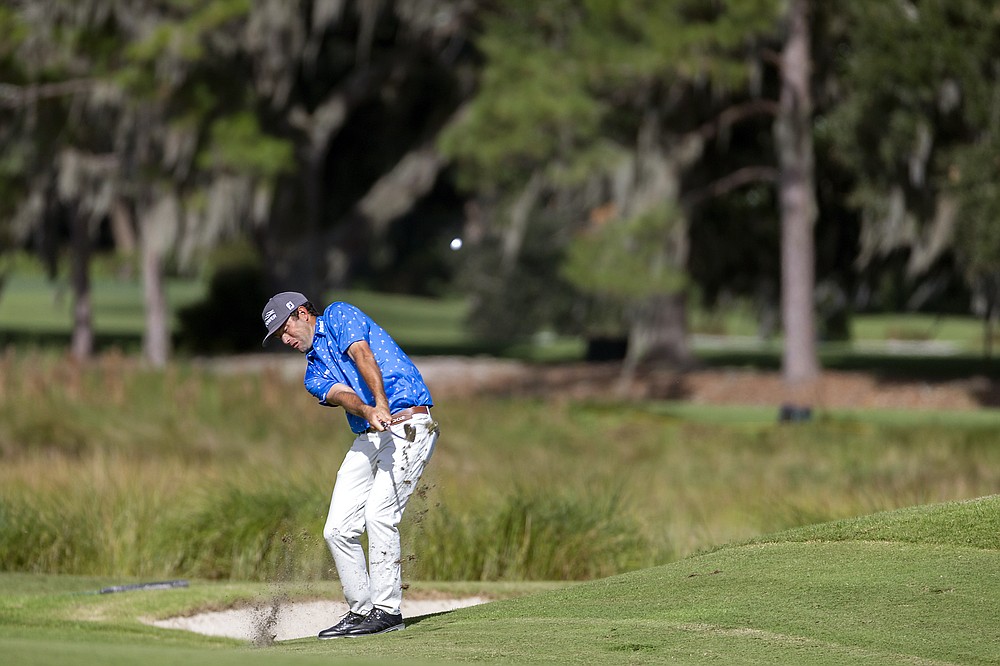 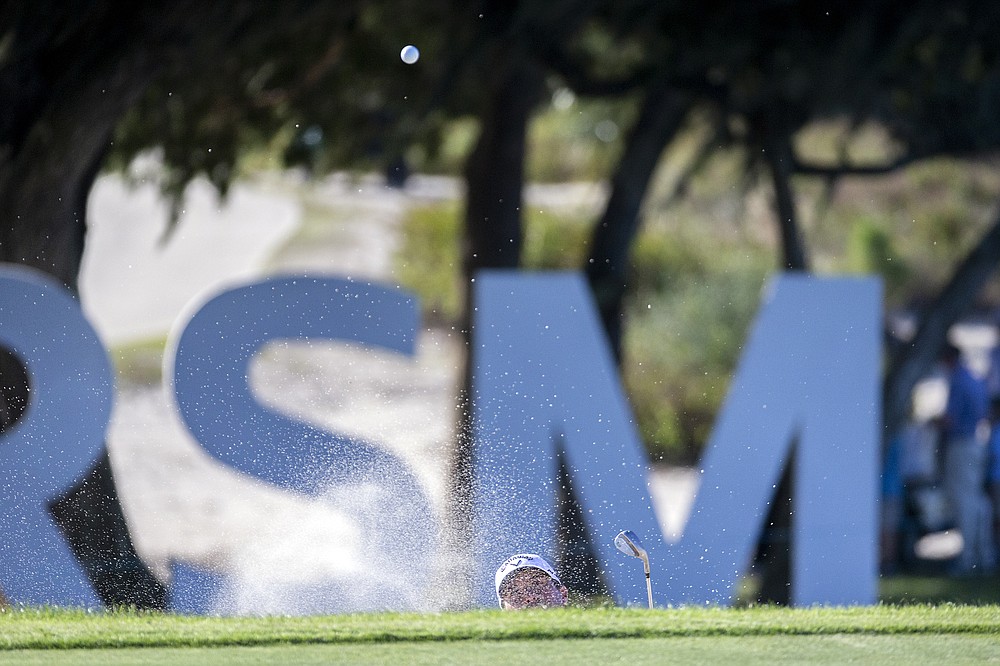 Kevin Kisner hits out the bunker on the 15th green during third round of the RSM Classic golf tournament, Saturday, Nov. 21, 2020, in St. Simons Island, Ga. (AP Photo/Stephen B. Morton) 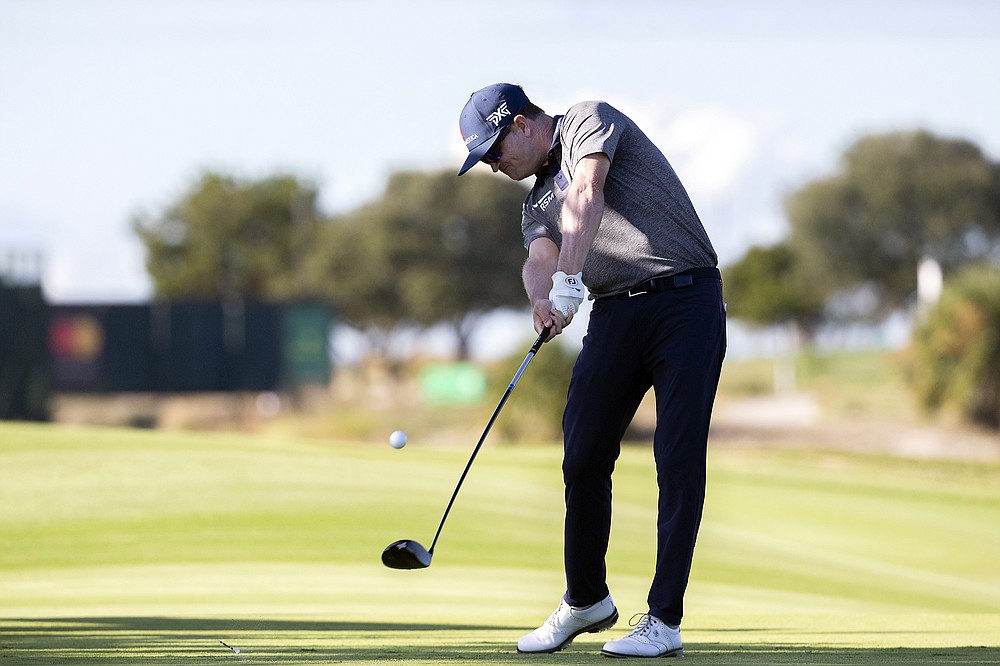 Zach Johnson hits off of the 16th tee during third round of the RSM Classic golf tournament, Saturday, Nov. 21, 2020, in St. Simons Island, Ga. (AP Photo/Stephen B. Morton)