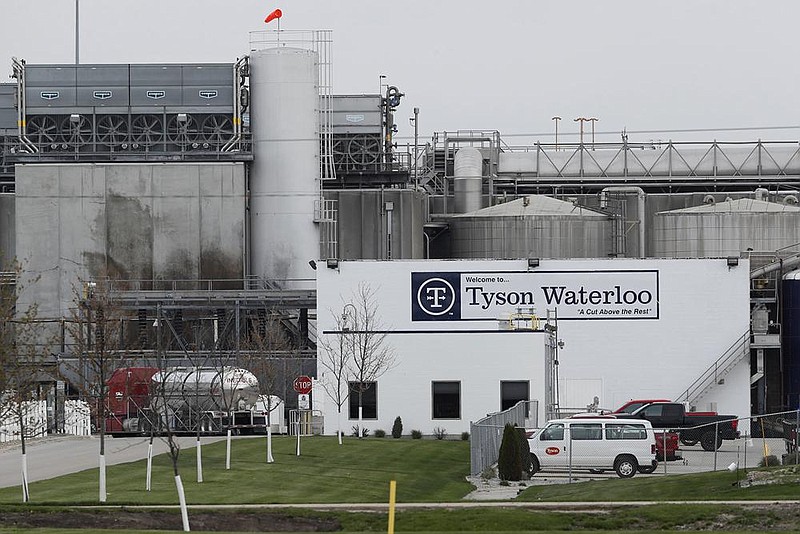 Vehicles sit outside the Tyson Foods plant in Waterloo, Iowa, in May. A recently amended wrongful-death lawsuit claims that the plant’s manager “organized” a betting pool for supervisors and managers to guess how many employees would test positive for covid-19. (AP)

Tyson Foods Inc. suspended the top leaders at its largest pork plant on Thursday and began an investigation into allegations that the plant managers placed bets on how many workers there would catch the coronavirus.

The company's president and chief executive, Dean Banks, said Thursday that he was "extremely upset" about the allegations against managers at its plant in Waterloo, Iowa, and that they do not reflect the company's values.

"If these claims are confirmed, we'll take measures necessary to root out and remove this disturbing behavior from our company," Banks said in a written statement.

He said employees involved with the allegations have been suspended without pay, but did not elaborate.

The Springdale-based company faced backlash over a recently amended wrongful-death lawsuit that alleges Waterloo plant manager Tom Hart "organized a cash buy-in, winner-take-all betting pool for supervisors and managers to wager on how many employees would test positive for covid-19."

Hart allegedly began the pool in the spring as the virus spread through the Waterloo plant, which ultimately infected more than 1,000 of its 2,800 workers, killing at least six and sending many to the hospital. The outbreak eventually reached the broader Waterloo community, temporarily shut down the plant and spurred criticism from local officials who said the company failed to provide necessary protections for its workforce.

Hart did not immediately respond to a request for comment.

Isidro Fernandez, who worked at the Waterloo facility, was one of the workers who fell ill and died on April 26 from complications of covid-19, the lawsuit says. Three others -- Sedika Buljic, 58; Reberiano Garcia, 60; and Jose Ayala Jr., 44; are also represented.

Fernandez's son, Oscar Fernandez, sued Tyson Foods earlier this year over the conditions in the plant and allegations that the company misinformed workers about the extent and severity of the outbreak.

"Despite an uncontrolled covid-19 outbreak, Tyson required its employees to work long hours in cramped conditions," the lawsuit alleges. "Moreover, despite the danger of covid-19, Tyson failed to provide appropriate personal protective equipment and failed to implement sufficient social distancing or safety measures to protect workers from the outbreak."

In addition to failing to properly prevent the spread of the virus, the amended lawsuit alleges that manager John Casey "explicitly directed" supervisors to ignore covid-19 symptoms and regularly downplayed the dangers of the virus, calling it a "glorified flu."

As the virus spread, the company lobbied for liability protections and printed out full-page newspaper ads that asserted the food supply chain was breaking and that it had a responsibility to keep feeding Americans. An executive order was signed shortly after that by President Donald Trump that classified food processing plants as "essential infrastructure" that must remain open.

According to the lawsuit, more than 8,500 employees at Tyson Foods have caught the virus and at least 20 have died, nationwide.

The company is reported to have spent more than half a billion dollars on virus-related costs and protective measures this year, which include temperature scanners and weekly testing procedures. Tyson Foods has said repeatedly that its top priority is the health and safety of its workers.

"We expect every team member at Tyson Foods to operate with the utmost integrity and care in everything we do," Banks said.

The company told reporters that the Waterloo plant was operating on Thursday, but allowed time between shifts to accommodate meetings outside. Banks went to the plant to speak with workers about the action it's taking.