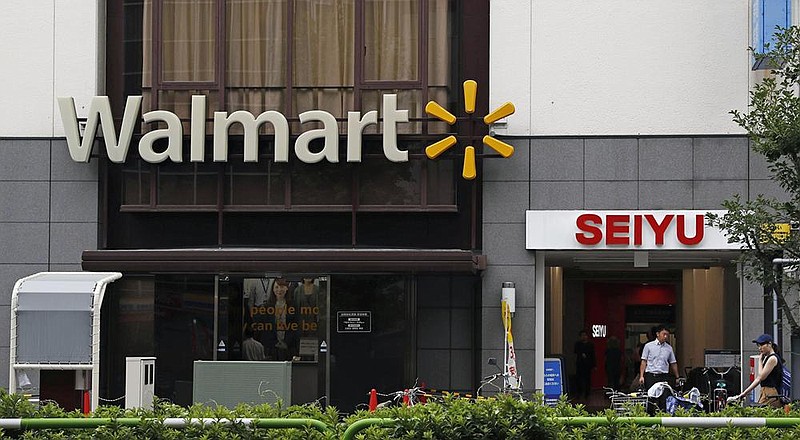 Walmart and Seiyu signs are seen in Tokyo in this file photo. Walmart is selling off 85% of the Japa- nese supermarket subsidiary in a deal valued at $1.16 billion. (AP)

Walmart Inc. is selling 85% of its Japanese operations in a deal valued at $1.16 billion, the companies said Monday. Walmart has pulled out of some lower-performing international markets lately to focus on more profitable regions.

Global investment firm KKR & Co. bought a 65% share in Seiyu GK while a new subsidiary of Japanese e-commerce retailer Rakuten Inc. is taking a 20% share, the three companies said in a joint news release. The deal is subject to regulatory approvals and is expected to close in the first quarter of 2021.

Walmart will retain a 15% stake in Seiyu. The Bentonville-based retailer will also have representatives on a new board of directors composed of the three companies.

Judith McKenna, president and chief executive officer of Walmart International, said the new ownership arrangement "is bringing together the right partners in the right structure to build the strongest possible local business."

According to Walmart's website, the company acquired a 6.1% stake in Seiyu in 2002 and expanded that to a majority interest in 2005. Seiyu became a wholly owned subsidiary of Walmart in 2008.

One of Japan's largest supermarket chains, Seiyu has more than 300 stores and employs about 34,600 workers.

Kazunori Takeda with Rakuten said joining forces with Walmart will help in "accelerating digital transformation of Seiyu brick and mortar retail and further merging the best of offline and online retail to offer Seiyu customers the best possible customer experience."

In March 2019, Walmart Japan Chief Executive Officer Lionel Desclee denied a yearlong rumor that Seiyu was for sale. A Walmart spokesman at the time confirmed Desclee's remarks, saying, "We continue to build our Japan business toward the future to meet the changing needs of customers there."

Then in June 2019, Desclee presented a three-year business plan for Seiyu. Called the Spark Plan, it featured more emphasis on pricing and assortment, and measures to better serve the needs of local shoppers.

Other retail giants have struggled in Japan. Tesco PLC, the U.K.'s leading supermarket chain, sold its Japanese unit in 2012. French retailer Carrefour S.A. sold its assets in Japan in 2005.

Walmart's international strategy for at least two decades focused on expansion, seeking to replicate its success in the U.S. in global markets -- China, India, the U.K., Brazil, Germany, South Korea, Canada and Mexico, among others.

In recent years, though, it has shifted its overseas business model to invest more resources into profitable markets such as Canada and Mexico, and emerging markets such as China and India.

Walmart Chief Executive Officer Doug McMillon said at the company's annual investor meeting in February that outside the U.S., its priorities are Mexico, Canada, India and China.

The retailer left its unprofitable ventures in Germany and South Korea in 2006. More recently, Walmart sold a majority share of its Brazilian operations in 2018.

Just last month, Walmart reached a deal to sell its U.K. business, Asda, to an investor group for about $8.8 billion, pending regulatory approval. An earlier attempt to sell Asda to rival Sainsbury's was blocked by Britain's regulatory agency.

Even more recently, Walmart said on Nov. 6 that it is selling its business operations in Argentina to a South American retailer for an undisclosed amount. Dave Marcotte, senior vice president of retail insights for Kantar Consulting, said he expects that deal to go through "cleanly and smoothly," as the buyer has a good relationship with Argentina's government.

Revenue from Walmart's international division comprises less than a quarter of the retailer's annual sales, which hit $524 billion last year.