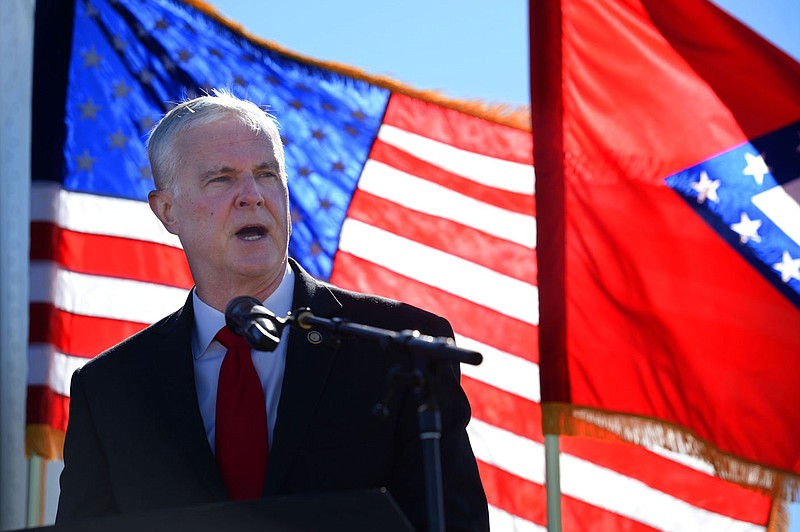 Third District Rep. Steve Womack, R-Rogers, speaks Wednesday during the inaugural Field of Honor event in Bentonville. The event was hosted by the Rotary Club of Bentonville as an observance of Veterans Day. Go to nwaonline.com/201112Daily/ for today's photo gallery. (NWA Democrat-Gazette/Andy Shupe)

BENTONVILLE -- Democrats saw their U.S. House majority whittled into a near-even split with Republicans in this election. Third District Rep. Steve Womack, R-Rogers, said Wednesday the new reality will hopefully avert more deadlock than it will cause.

The Nov. 3 election served as a rebuke to Democratic House members, who advocated a harder line against Republicans, Womack said.

"Nobody on their side of the aisle saw this coming," he said.

Polls showed likely Democratic gains in the House and a good chance of attaining a Democratic majority in the Senate. Election results show the Democrats have lost at least five seats and are trailing in most of the 15 elections where a winner hasn't yet been declared. Enough Democrats have won to assure the minimum 218 seats needed for a majority.

The Senate, meanwhile, is split in results so far.

Once new members are seated, Democrats will not have a large enough majority to pass bills without Republican cooperation unless they stick together by adopting the unpopular demands of Democrats' most liberal members, Womack said.

Michael John Gray, chairman of the Democratic Party of Arkansas, said he hopes Congress cooperates more, but he said the Republican-controlled Senate is the real barrier to successful legislating.

A narrowly divided House is much more likely to approve a so-called "discharge petition," Womack said. A bipartisan majority in the House can pull a bill from committee control and bring it to a vote by that procedure. Womack said such petitions could unlock bills on popular bipartisan issues such as infrastructure spending.

Womack is poised to become chairman of House Subcommittee of Appropriations if his party wins a majority in the 2022 elections if he wins re-election, he said.

"I hate to use the word 'power,' but the reason is the power of the purse," Womack said when asked why he chose to give up a chance at being House Budget Committee chairman. Members are not allowed to be chairman of both those committees. The federal budget is a broad framework. Appropriations are specific, allowing a greater influence on policy, he said.

The story was updated to correct the name of the appropriations subcommittee.