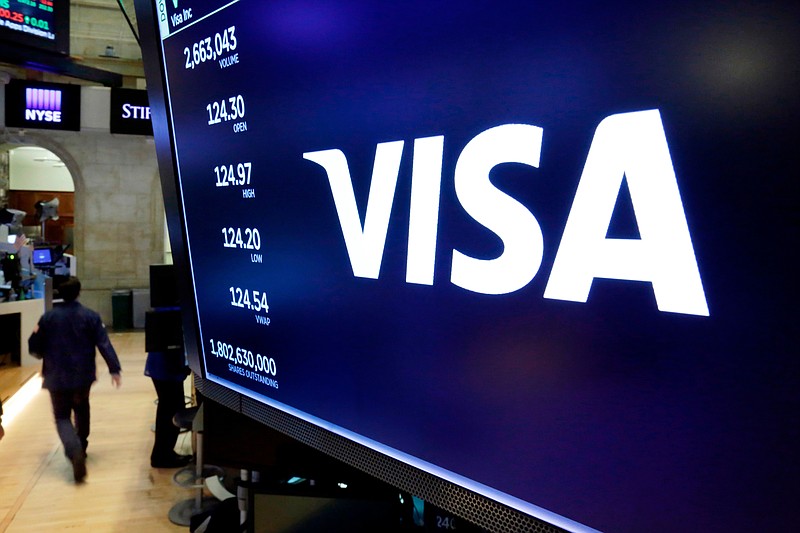 FILE- In this April 23, 2018, file photo, the logo for Visa appears above a trading post on the floor of the New York Stock Exchange. The Department of Justice sued payment processing giant Visa Inc. on Thursday, Nov. 5, 2020, to block the company’s purchase of financial technology startup Plaid, calling it a monopolistic takeover of a potential competitor to Visa’s ubiquitous payments network. (AP Photo/Richard Drew, File)

The Department of Justice sued payment processing giant Visa Inc. on Thursday to block the company's purchase of financial technology startup Plaid, calling it a monopolistic takeover of a potential competitor to Visa's ubiquitous payments network.

The lawsuit, filed in the Northern District of California, seeks to stop Visa's purchase of Plaid, which at $5.3 billion would have been the second-largest acquisition in the company's history, second only to Visa's buyout of Visa Europe a few years ago.

Plaid provides the infrastructure to allow consumers and businesses to pay directly from their bank account. Services like Venmo, SoFi, Stripe and TransferWise all use Plaid as a way for consumers to send money from their bank accounts to another party without having to use the debit card infrastructure that's largely controlled by Visa and its competitor Mastercard.

The payments network earned $4 billion from the business last year, according to the complaint.

By providing an infrastructure that would bypass the traditional debit card networks, Plaid presented a competitive threat to Visa, the Department of Justice argued in its lawsuit, and without it being an independent company, consumers and businesses would in turn pay higher prices to take Visa debit cards.

"Visa's proposed acquisition of Plaid would forestall this competition, allowing Visa to maintain its monopoly position and supracompetitive prices in online debit," the lawsuit said.

In a statement, Visa said it strongly disagrees with the government's lawsuit, arguing that Plaid is a payment infrastructure company, not a payment network like Visa.

"This action reflects a lack of understanding of Plaid's business and the highly competitive payments landscape in which Visa operates," the company said.

Visa's dominance in debit comes from its extensive network: Banks have slapped Visa's logo on half a billion debit cards in the U.S. and those cards are then accepted at millions of merchant locations around the world. Few companies have been able to replicate Visa's success.

When Visa was considering a deal for Plaid in March 2019, a Visa executive compared Plaid to an island "volcano" in the ocean and warned that beneath the surface "is a massive opportunity -- one that threatens Visa," according to the complaint.

Months later, as Visa was conducting its due diligence on Plaid, Visa learned the company planned to create a "meaningful" money movement business by the end of 2021. Plaid was seeking to offer the service at a 50% discount to Visa's fees, saving merchants millions of dollars -- a plan it was upfront with Visa's executives about. Visa Chief Executive Officer Al Kelly told Chief Financial Officer Vasant Prabhu that the acquisition would be an "insurance policy" to protect the business, according to the complaint.

Those fears culminated in January's surprise announcement: Visa would pay $5.3 billion for Plaid, a multiple of 50 times the data company's revenue.

The Justice Department said Plaid is uniquely positioned to offer a "pay-by-bank" service that would compete with Visa's online debit service. Instead of providing their debit card credentials when paying for goods online, consumers give their bank account information. Banks typically charge a flat fee between 2 cents and 25 cents for such transactions, whereas a $60 debit card transaction can carry a fee of as much as 39 cents, the Department of Justice found.

The Justice Department argued Plaid's connections to consumer bank accounts means the company could be an attractive partner to merchants looking for an alternative to accepting Visa's debit cards. Retailers have long complained about the fees associated with accepting debit cards, even after the U.S. capped the rates Visa and Mastercard can charge on such transactions roughly a decade ago.

Retailers spend more than $100 billion a year on accepting electronic card payments. While Visa and Mastercard are responsible for setting the fees that merchants are charged, most of it goes to the banks that issue the cards, with the networks taking a much smaller percentage.

Information for this article was contributed by Ken Sweet of The Associated Press and by David McLaughlin and Jenny Surane of Bloomberg News.