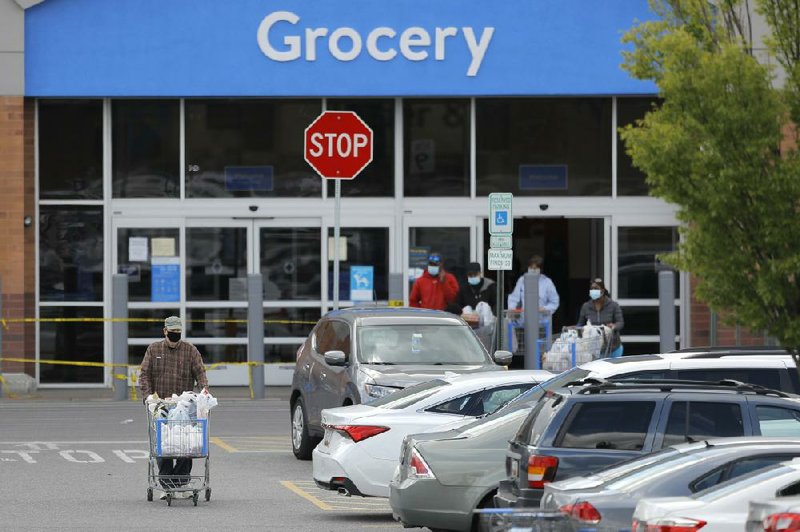 A shopper leaves a Walmart store last week in Cockeysville, Md. Walmart said recently that it “proactively rolled out many safety measures” was not yet not putting “a timetable on making modifications.” (AP/Julio Cortez)

As states, cities and businesses begin to cautiously reopen despite the still-present coronavirus pandemic, Walmart Inc. has no plans to relax its safety measures. Some critics, though, say the retailer hasn't done enough to protect its workers.

Walmart would not say how or when it might begin rolling back the many physical and operational changes it's made at its stores and other facilities over the past few months as the coronavirus spread across the U.S.

"The safety of our associates and customers is at the forefront as we navigate this fluid situation," the Bentonville retailer said recently in a brief emailed statement. "We proactively rolled out many safety measures and we're not putting a timetable on making modifications but will be thoughtful and deliberate as we monitor changes in cities and states and adapt accordingly."

Walmart was in the vanguard among big-box retailers in adopting increasingly stringent protocols to safeguard employees and customers as the virus swept the nation. In mid-March, the retailer reduced hours at its Supercenters, Neighborhood Markets and Sam's Clubs to give workers more time to clean and sanitize the stores.

The retailer also established an emergency leave policy for hourly employees, allowing paid time off for workers with virus symptoms or confirmed cases, or those required to go into quarantine. Employees unable to work or who felt uncomfortable in the workplace could use accrued time off to get paid.

By early April, workers were disinfecting carts, and Walmart began installing sneeze guards at checkout and signs to encourage social-distancing. The company started screening employees for symptoms of the virus, including taking their temperatures, and providing masks and gloves for those who requested them.

A short video produced by Walmart at a distribution center in Oklahoma, available at arkansasonline.com/517smith, highlights efforts there to protect the retailer's supply chain workers.

More recently, Walmart's begun requiring store workers to wear the masks and encouraging shoppers to do so as well. The company also limits the number of shoppers who can be in a store at any given time to make social-distancing easier.

These measures closely follow guidelines issued by the Occupational Safety and Health Administration. But as critics have pointed out, those are only recommendations and the federal agency has no means of enforcing them.

Some Walmart workers say that many of the initiatives never made it to their stores. On social media channels and in complaints to local health officials and OSHA, employees claim the safety protocols are insufficient or store managers ignore them.

While Walmart is certainly not the only U.S. retailer whose workforce has been affected by the pandemic, as the nation's largest private employer with about 1.5 million workers in the U.S., the retailer draws notice from many quarters.

The Wall Street Journal reported on April 18, without citing sources, that the coronavirus had killed at least 18 Walmart employees and put 10% of its workforce on leave.

[Video not showing up above? Click here to watch » https://www.youtube.com/watch?v=cq14P5XJYJM]

What has been documented includes the deaths in March of two men from covid-19, both of whom worked at the same Chicago-area Supercenter. The family of one of the employees has filed a wrongful-death lawsuit against the retailer.

A Walmart Supercenter in Colorado temporarily closed April 23 after an employee, her husband and a contract store security guard all died of the virus.

In Worcester, Mass., city officials shut down a Supercenter last month after hearing from customers and employees that safety practices such as social-distancing and the wearing of masks were not being followed there.

The store reopened a week later after it was sanitized by professionals and all workers were tested for the virus. Of the more than 400 employees and others who worked in that building, 81 tested positive.

The next week, a second Boston-area store closed temporarily after one employee died of the coronavirus and 10 more tested positive. Tom Koch, the mayor of Quincy, Mass., said Walmart made the decision to shutter the store on the advice of the city's health commissioner. Again, customers and employees had complained that safety protocols were not being observed in the store.

The Massachusetts cases in particular have drawn the attention of U.S. Sen. Elizabeth Warren, a Democrat who represents the state. Warren, along with U.S. Sen. Edward Markey, D-Mass., and nine members of the House of Representatives, expressed their concerns in a letter on May 7 to Doug McMillon, Walmart's president and CEO.

"We are seeking information about how you are addressing the safety and protection of workers in Walmart stores in Massachusetts, and what changes you are implementing to ensure there are no additional outbreaks in stores in the Commonwealth," the authors said in the letter.

Citing a May 5 article in the Boston Globe, the letter states that nationwide, "more than 20 Walmart employees have died from COVID-19, and employees have had to take the critical work of contact tracing into their own hands to try and remain safe."

Warren and Markey asked five specific questions, including why Walmart is not informing employees of their possible exposure to the virus when a colleague tests positive, in accordance with the Centers for Disease Control and Prevention's guidelines. They also asked how and when Walmart is communicating with local health officials regarding suspected or confirmed cases of the virus at its Massachusetts stores.

The letter's authors asked McMillon to provide answers to their questions by May 21.

When Walmart was asked what it would say in its reply to Warren's letter, the company offered this statement:

"Massachusetts is suffering from a high rate of coronavirus cases, and several of our stores located in some of the state's hot spots have also been hit hard by the pandemic. It may be impossible to track the source of anyone's infection, especially in some of these communities that have felt the devastating impact of the virus. That's why we are working in partnership with local health officials and are taking aggressive steps to help ensure the safety of our associates and customers. We have temporarily closed some stores to conduct COVID-19 testing of our associates and for additional cleaning and third-party sanitizing. For associates that have tested positive, they are using our COVID paid leave options as they recover. Sadly, we have also had associates pass away, and we feel their loss deeply.

"We are following the evolving guidance of public health experts and we have quickly taken steps aimed at keeping our customers and associates safe. ... We will continue to be proactive in our approach to health and safety. We also urge our customers to follow social distancing recommendations and wear masks and other facial coverings. We understand the critical role our associates are playing in ensuring that communities continue to have access to fresh food, medicine and critical supplies during this crisis."

Warren's letter referred to a grassroots group of Walmart employees called United for Respect, which filed a complaint with the occupational-safety agency's regional offices in Massachusetts on May 8.

In the complaint, the group claims Walmart's policies are endangering workers and contrary to CDC and OSHA guidelines. Walmart workers across the country, including in Massachusetts, have told the organization that the unsafe working conditions include Walmart's failure to inform employees when a co-worker is diagnosed with or suspected of having the coronavirus.

They also claim Walmart is not closing stores for thorough cleaning and disinfecting when an employee is known to have the virus or to have been exposed; and fails to enforce social-distancing by allowing too many shoppers in stores at a time.

Further, the group said inadequate paid sick leave pressures employees to work even if they have symptoms of the virus or have been exposed to it. "At Walmart, an employee who has symptoms of covid-19 or who has a sick family member at home is entitled to no additional sick leave to cover her absence," they said in the complaint.

Finally, United for Respect claims Walmart is violating OSHA's general-duty clause, which requires an employer to "furnish to each of his employees employment and a place of employment which are free from recognized hazards that are causing or are likely to cause death or serious physical harm to his employees."

A Walmart employee in New Jersey also filed a complaint with OSHA around the same time as the Massachusetts one. It makes many of the same claims, including crowding of stores; no overnight cleaning; and no effort to inform all employees when co-workers were found to have the virus.

The complainant noted that one of the store's two employees who tested positive had worked in the deli and "hot bar" area. "Walmart did not even close the deli and hot bar for cleaning" after the employee became ill, according to the complaint. "Business just continued as usual."

Walmart declined to comment on the specifics of the OSHA complaints, saying only that "the controls and practices we have in place are consistent with CDC and OSHA COVID-19 preparedness guidance."