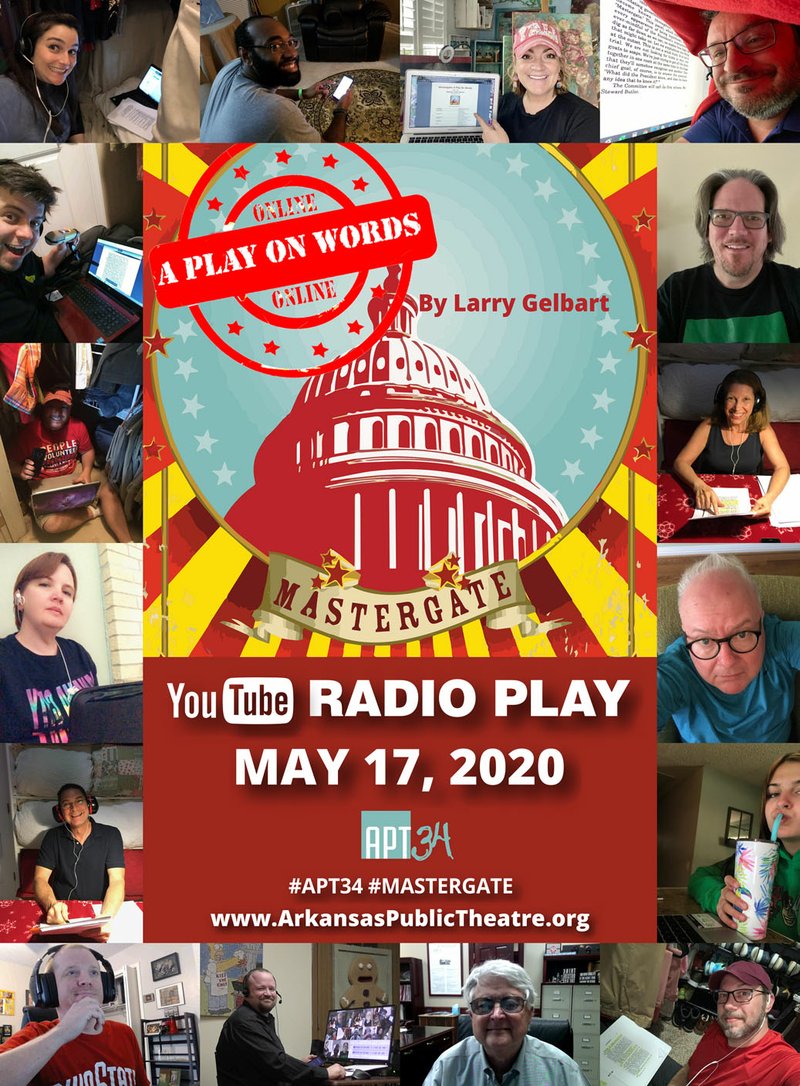 But here's the good news: APT has branched out into a new dimension of drama, delivering its first virtually rehearsed and socially distanced recorded comedy "Mastergate" to its YouTube channel today.

The script, subtitled "A Play On Words," was written by Larry Gelbart, best known as the creator of the TV series "MAS*H." Premiered in 1989 at the Criterion Stage Right in New York City, "Mastergate" is "a hilarious political satire that does not fail to pull you in right away," says its director, Matthew Etris.

"I want to be careful not to reveal too much," he demurs. "There are quite a few surprises in store for listeners! The story is set in 1989 and centers on a congressional hearing investigating the CIA diverting arms to guerrillas in Central America through the filming of a high-budget action film produced by Master Pictures. The goal of the committee, as described by Sen. Bowman, played by Tom Karounos, is to find out 'What did the President know and does he have any idea that he knew it?'"

Etris admits this might sound a little familiar to those who followed the Iran-Contra scandal in the 1980s. That was the author's inspiration for the play.

"The language of the play is a character all its own," Etris adds, "as Larry Gelbart is a genius at wordplay and the political art of 'doublespeak.' News reporter Merry Chase, played by Elizabeth Wax, is the narrator of sorts. She fills in the gaps, helping the audience follow the action of the radio play. It's the perfect formula."

Casting was even easier than Etris expected, he says.

"I've had the pleasure of working on many shows at APT with very talented casts, so a good talent pool was not hard at all," he says. "After studying the script and determining how many parts can double, I made up a list of people that I could picture, or should I say hear, play the roles. To my surprise, everyone was very excited and jumped at the opportunity. I believe cabin fever may have played a part!"

Then cast and crew learned together how to put on a play without ever meeting in person.

"It was technically more complicated than you think," says Terry Vaughan, who plays "a Democratic congresswomen from New Jersey and a warmongering Republican senator from Oklahoma."

"Because of the pandemic and social distancing, we all created our own sound studios in our houses so we could record our voices during the rehearsals and send the audio files to Matt to test for sound quality," she explains. "Most of us were working in closets padded with pillows or under a blanket. Add in mute buttons, our dogs, and all the background noises that naturally occur in houses, and you can see what a great job Matt did matching the background noise for all of us so it sounds like we are in the same place."

"I learned that it's hard to create an ad hoc recording studio at home," says Elizabeth Wax, who plays Merry Chase. "I also learned -- by recording for hours in my closet -- that I have WAY too many clothes! But I truly learned how important it is to listen to my fellow actors during performances, to be able to play off of the pitch and cadence of their voices, as opposed to their physical movements on a stage."

"At first, hearing just your voice is strange," adds Kenneth Trimbrel, who plays Abel Lamb and Vice President Burden. "Especially when you are also trying to convey a character through audio means. The cast of this show made this experience so much fun. We all were developing characters, and it was really exciting to hear these characters evolve throughout the process."

Print Headline: The Show Must Go On!