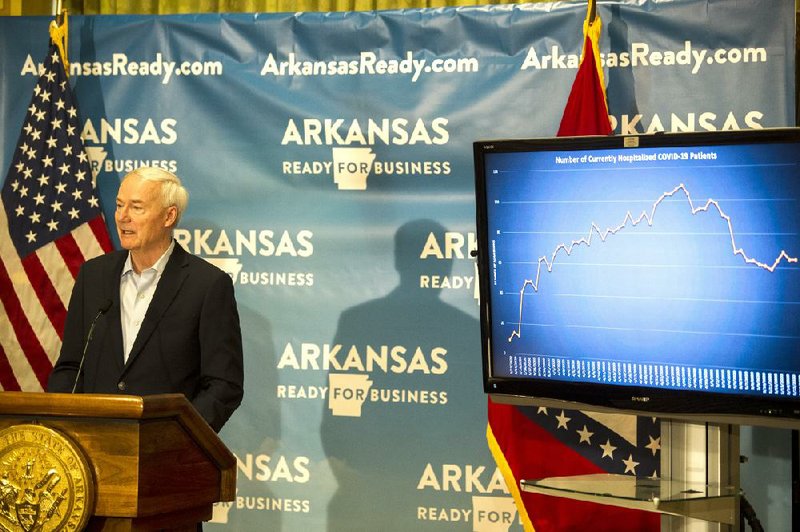 Gov. Asa Hutchinson says Saturday, May 16, 2020, that a team was working through the weekend to get the Pandemic Unemployment Assistance system running again after the website had exposed applicants’ private information. More photos at arkansasonline.com/517gov/. (Arkansas Democrat-Gazette/Stephen Swofford)

[MONDAY UPDATE: The latest tally raised the total number of virus cases since the start of the state's outbreak to 4,759, the Arkansas Department of Health reported. Meanwhile, Arkansas casinos are prepared to open Monday. Read more here » arkansasonline.com/news/2020/may/18/casinos-in-state-ready-to-reopen-202005/]

A suspected security breach committed by an applicant using the Pandemic Unemployment Assistance website caused the entire system to be shut down, Gov. Asa Hutchinson confirmed during a news conference Saturday.

State officials learned of the breach Friday, and law enforcement officials were notified, along with the state's cyber-insurance carrier, Hutchinson said.

"Forensics are currently being conducted by an outside [information technology] expert," Hutchinson said. "We want to make sure the system is in good shape before it goes online."

He was not specific about the time frame. No arrests were announced.

Hutchinson said he was notified after officials at the Arkansas Division of Workforce Services discovered that the website had exposed applicants' private information.

A team is working through the weekend to get the system running again and to get people's unemployment benefits "out the door" as early as this week, Hutchinson said.

The governor added that if there is any indication that someone's personal data was "compromised," steps will be taken to notify the applicant.

"This is something we have had some experience with," Hutchinson said. "It's one of the reasons we have a good cyber insurance program here in the state."

[Video not showing up above? Click here to watch » https://www.youtube.com/watch?v=LEvRTfGfams]

The governor also announced Saturday that the state has an additional 115 coronavirus cases. Forty of those are from the general population and the remaining 75 are from the Randall Williams Unit state prison in Pine Bluff.

The latest tally raised the total number of virus cases since the start of the pandemic to 4,578, according to the Arkansas Department of Health. The number of covid-19-related deaths did not change Saturday, holding at 98. Arkansas remains one of 12 states that hasn't reached triple digits in covid-19 deaths.

A total of 65 positive patients remained hospitalized across the state Saturday. That number was the same as the day before, said Dr. Nate Smith, the state's Health Department director. He added that 10 of those patients were on ventilators, a day-to-day increase of one.

As of Saturday evening, a total 3,472 Arkansans have recovered from the virus, Smith said.

There are 1,008 people who still have active infections. Of those active cases, 101 are nursing-home residents and another 370 are prison inmates, according to the Health Department.

Arkansas Department of Corrections Director Dexter Payne said the Randall Williams Unit has tested 515 inmates, and 231 of the results were positive. Another 155 tests came back negative, and officials were still waiting for the results from the remaining 129 as of Saturday afternoon.

Payne said the facility has been placed on "lockdown."

He pointed out that prison officials have moved the positive-testing inmates into a separate barracks from the negative-tested ones "to keep from cross-contaminating the inmate population."

Payne also said the unit "is in a better position" to handle an outbreak because there are two other correctional facilities in proximity -- the Barbara Ester Unit and the Pine Bluff Unit -- and staff members at those are helping supply and prepare food for the Randall Williams inmates.

Prison officials are working to prevent cross-contamination from one facility to another by preventing staff members at the noninfected lockups from entering the Randall Williams Unit. Deliveries are dropped off at the back and picked up by people from inside the unit, Payne said.

As for the Cummins Unit in Lincoln County, 872 positive results in total were reported for inmates tested there. In all, 860 of those inmates have recovered, according to the state. The facility was the first Arkansas prison to deal with a severe outbreak.

"The inmates are Arkansans," Hutchinson said. "We care about them. We want to make sure they have the care they need."

The Arkansas Legislature in March sent two bills to Hutchinson to allow him to take $173 million from a "rainy-day" fund to help fill budget holes caused by the pandemic. He signed them, and the money is being distributed.

On Friday, two lawmakers -- Sens. Bart Hester, R-Cave Springs, and Jim Hendren, R-Gravette -- refused to sign off on money intended for Henderson State and Arkansas State universities. Out of that $173 million, the schools were expected to receive $850,000.

Two of three Senate leaders were needed to approve the allocation, but only one did.

Hutchinson said Saturday that he hadn't had a chance to speak with Hester or Hendren. The latter is the governor's nephew.

"I hope we can have some conversations about that," he said. "I do support that assistance for Henderson State University. I realize they've made mistakes in the past, but we don't want to penalize the [school's] future for mistakes that have been made in the past."

In July, Glen Jones Jr. resigned as president of Henderson State because of mounting debts the university accrued during his leadership. The money woes caused trustees to vote to merge the university into the Arkansas State University System.

Hester, who was reached by phone Saturday, described his refusal as a "pretty hard no" because he had "no significant desire" to give more money to a place that has already collected it from other sources.

"There are businesses all over Arkansas that are hurting," Hester said. "Meanwhile, these institutions are already receiving significant support."

Hester also referred to the possibility of Jones returning to Henderson State in a teaching capacity, which reportedly was part of his separation agreement.

"You let someone who destroys the university to come back and teach business?" he said. "I just don't see us giving them any more money in addition to the support they've already been given."

On Friday, the East Summit and West Summit trails at Pinnacle Mountain State Park reopened. Several people went to the park Saturday to hike those trails, in spite of a rainy forecast. They were elated for the opportunity to be outdoors at a scenic park again.

"It has been beautiful," said Jennifer Jones of Little Rock. "I came for the fresh air, and I needed it. It's so much better than being inside all the time."

Parks like Pinnacle Mountain were closed because of concerns about the spread of the virus.

A couple of walkers who were headed back to their car blurted out to a reporter that they thought no such order should have been given. The trails should have always stayed open, they said.

Rachel Robinson, a mother of three, took her two sons and a daughter with her Saturday morning to the East Summit. She, too, was relieved about having a destination to go to again for the sake of exercise.

"Our backyard is a straight hill, so we've been inside a lot," she said as she fastened her youngest son into a baby carrier. "It's really nice to be out here now. It makes me not feel so depressed." 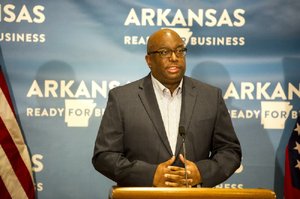 Dexter Payne, director of the state Department of Corrections, announced Saturday that the Randall Williams Unit state prison in Pine Bluff has been put under lockdown after a spike in coronavirus cases. (Arkansas Democrat-Gazette/Stephen Swofford) 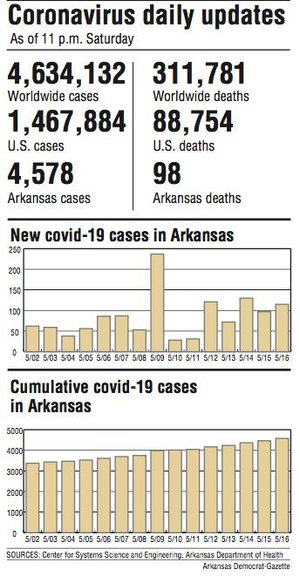 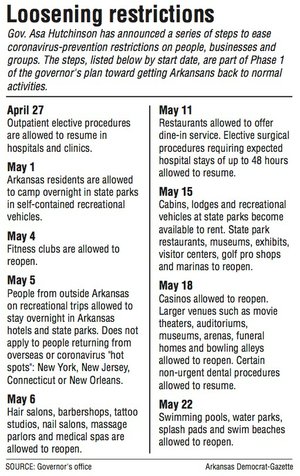