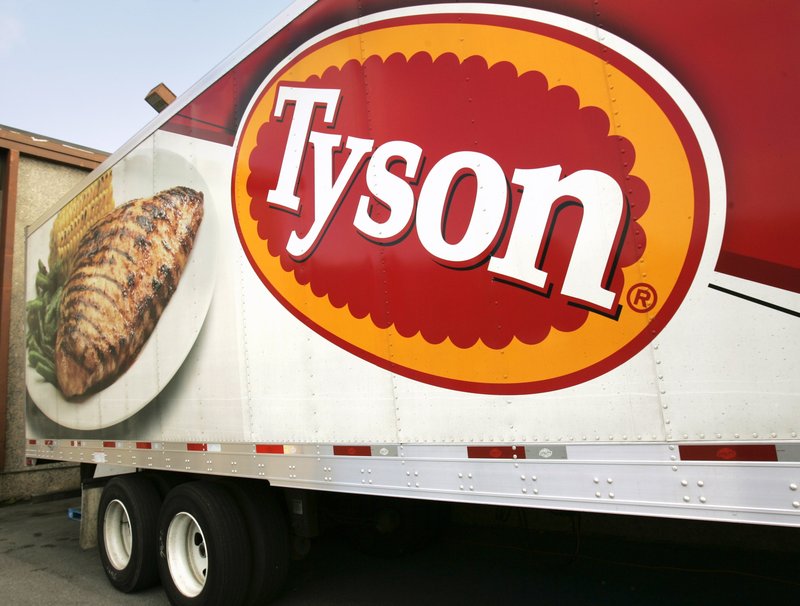 Tyson Foods Inc. on Monday reported that net income fell about 15% during its second quarter from a year earlier as production issues weighed on the business.

The coronavirus pandemic has hit Tyson hard, forcing the company to slow production or close plants temporarily as hundreds of its workers test positive for covid-19.

"In my career this is the most significant and severe crisis that we've gone through," Tyson's Chief Executive Officer Noel White said in a morning conference call. Steps have been taken to mitigate outbreaks in the plants and keep them operational, but the company is anticipating more closures.

Despite the slower production lines and lower output volumes, White said he believes the company is well-positioned for strong earnings growth.

Sales rose 4% to $10.89 billion because of strong beef and pork demand from grocery shoppers who went into a buying frenzy in March. Prepared-food sales were flat and chicken sales dipped as restaurants, schools and other businesses were ordered to close across America.

Wall Street analysts had been adjusting their estimates before Tyson released the report, but didn't anticipate such an earnings miss. They expected the company's adjusted earnings per share to be $1.04, according to a FactSet consensus. Stephens Inc. predicted it would be $1.09.

Adjusted for $110 million in pretax charges for pension plan terminations, Tyson reported earnings of 77 cents per share. The company said it was facing several challenges from the pandemic and expects operating costs to increase and hurt its production through September. Tyson dropped its guidance from the report, citing "uncertainty of the covid-19 impacts on our operations."

For the quarter that ended March 28, the Springdale-based company reported sales growth in its beef, pork and international business segments, while chicken and prepared foods were flat.

Tyson posted a 21% decline in operating income to $501 million, down from $635 million last year. Profits fell across segments from a year earlier, except for international and pork, which were relatively flat. Margins were down by a third in Tyson's beef, chicken and prepared-foods businesses. Pork was down about 15%.

White said Tyson expects the virus to affect its third quarter with gradual recovery in the fourth quarter, "however all of this depends on the extent at which schools and businesses are able to reopen."

He also said the company had a sound balance sheet and strong liquidity going into the crisis. Tyson took out a $1.5 billion loan in late March.

In a research brief, Ben Bienvenu, a Stephens analyst covering farm and agribusiness, said the company offered a "sober outlook for the remainder of the year" that points to "continued challenges and uncertainty." He also expected Tyson's stock to be down "given the magnitude of the miss."

People can expect to see a similar performance from other meatpackers this earnings season, said Chad Hart, extension economist at Iowa State University. Food service took a step back as packers readjusted their lines to meet retail demand, which has not made up for the losses from restaurant and school closures. That combined with temporary plant closures have hurt profits and the "outlooks were not pretty either," he said.

"This is common refrain throughout the meatpacking sector," Hart said.

To keep workers safe and the plants open, Tyson and others are deep-cleaning their facilities, checking workers for fever and widening their health coverage, among other measures. Despite these protections, the virus is finding its way into America's plants and sickening thousands of workers. Last week, an executive order was signed to keep meatpacking plants operational and ensure that companies have an adequate supply of personal protection gear for its workers.

"We will not send anyone into our plants to work unless we are confident it is safe," White said in a morning conference call. The company is working with Matrix Medical Network to get on-site testing available at Tyson plants that were closed and are expected to reopen soon.

"The only way we can operate this business is for our team members to feel safe and protected and not fearful of coming to work," White said.

At least 4,193 workers at 115 meatpacking plants have been infected with the virus, according to a report issued Friday by the U.S. Centers for Disease Control and Prevention. The findings may underestimate the full scope of the problem as not all states with infections, including Arkansas, have reported them to the agency.

State health officials toured through a couple of Northwest Arkansas chicken plants in late March to see what Tyson has done to improve worker health and safety. Tyson President Dean Banks said in a morning call with news media that they were encouraged by the safety measures and wanted to use the plants as a model to educate other industry leaders.

With cases relatively lower in Arkansas, White said chicken growers in the area have not been impacted by the virus as much as growers in other states.

"We've had some but not significant," he said. "We've slowed down the growth rate of birds and have not been forced to euthanize or dispose of any chickens at this point."