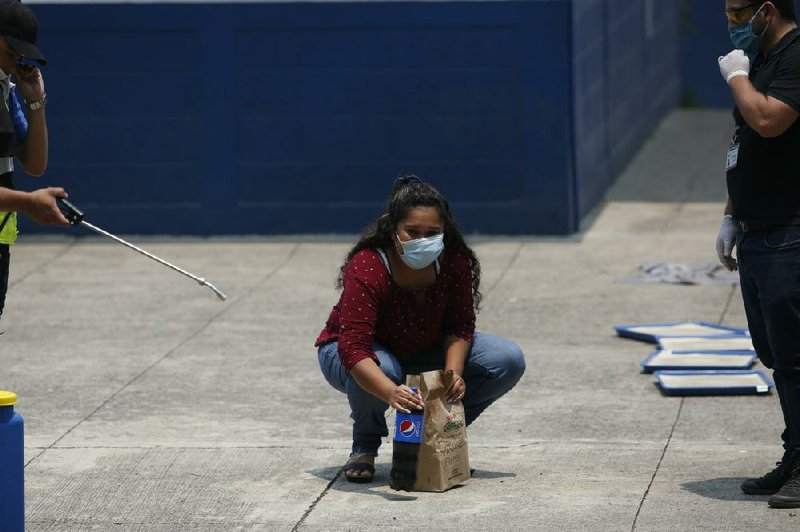 Deported Guatemalan Vanessa Diaz looks toward her family last month as she picks up the food they delivered to the site in Guatemala City where those who are returned from the U.S. are held in quarantine for two weeks. (AP/Moises Castillo)

GUATEMALA CITY -- Guatemala said Monday it will receive three flights this week carrying a total of 175 deported migrants after the United States agreed to test all those being deported for coronavirus.

The flights scheduled for Monday, Wednesday and Friday mark a resumption of such deportations after Guatemala suspended them because many migrants were later found to be suffering from the new coronavirus.

Guatemala's Foreign Relations Ministry said the returning migrants "will carry with them a medical certificate that states they have been tested for COVID-19, with negative results."

Alejandra Mena, the spokesperson for the country's Migration Institute, said the migrants will be tested 72 hours before being deported and will be isolated before boarding flights. Unaccompanied minors detained at the U.S. border are also to be returned.

The returning migrants will also get health checks and may be monitored for up to 96 hours for symptoms.

The policy marks a major change in how the U.S. handles its deportation flights to Guatemala.

The Central American nation's government suspended the flights after at least 44 deportees on an April 13 flight from Louisiana tested positive for the virus.

President Alejandro Giammattei recently referred to it as "that damned flight," showing his frustration with a topic that has become sensitive domestically as the country's teetering health system tries to confront the virus's spread and there have been reports of harassment of deportees because other people feared they carried the virus.

Last week, Giammattei said some countries were helping Guatemala with financial and medical resources to confront the virus while others "have sent us infected deportees, but not a dime."

At least 100 Guatemalans deported from the U.S. between late March and mid-April have tested positive for the virus.

Since at least March, the government had been asking its U.S. counterparts to certify the health of deportees before putting them on flights. Until now, that had meant only checking their temperature or looking for other symptoms.

Last week, U.S. Immigration and Customs Enforcement said it plans to test all migrants before they are deported from the U.S., as well as all those in its custody, but doesn't yet have enough tests to do so.

Migrants returning from the U.S. were once considered heroes in Guatemala, where the money they send back to their hometowns is a mainstay of the economy. But since the pandemic hit, migrants in town after town have been mistreated, run off or threatened by neighbors who fear they will bring the virus back with them.

Similar mistreatment is being reported across Latin America and the Caribbean. For immigrants already shaken by the Trump administration's hard line on deportation, mistreatment at home is a further blow, and a disturbing illustration of how the pandemic is upending longstanding social norms in unexpected ways across the world.

Vanessa Diaz said her mother heard rumors that neighbors were organizing to keep her from reaching her home in the northern province of Peten after she was deported back to Guatemala on a flight from the United States.

Diaz had to run inside with her 7-year-old son and hide when she got there.

"When we arrived, my mother said, 'Get out of the car and run into the house.' She was afraid they were going to do something to us," Diaz recalled.

Even those who, like Diaz, are not infected -- she was placed on home quarantine for two weeks after arriving last month on a flight on which nobody tested positive -- carry the stigma.

"The assistant mayor was going around egging people on, because they wanted to kick me and my son out of my house," Diaz said.

The fear hasn't subsided; Diaz's mother must shop for food for them all, because her daughter doesn't dare venture out. The mother has filed a complaint with police, because she fears neighbors might yet attack the house.

"I am afraid. The police came to the house and left their phone number, so we can call them" if there's any trouble, Diaz said. But reason and the threat of legal action appear to mean little. "I have a document that says I do not have the disease," Diaz said, referring to a letter given to her by the Public Health Ministry.

Diaz left Guatemala on Feb. 14 and was caught entering the U.S. two weeks later. She and her son spent more than a month in detention in Texas before they were deported.

​​​​​Information for this article was contributed by Sonia Perez D. and other reporters for The Associated Press.