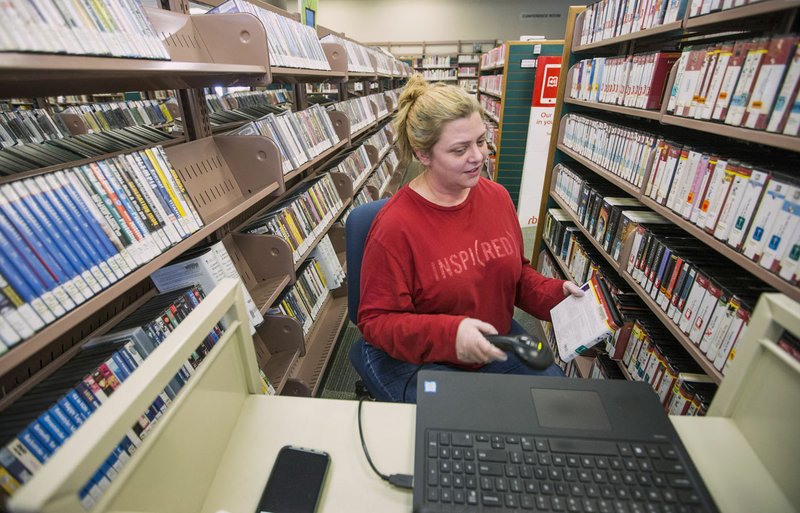 Susan Barnhart, library assistant, scans barcodes Wednesday doing an inventory at the Rogers Public Library. The library is closed to the public to help prevent the spread of covid-19, but staff are taking advantage to the time to inventory the entire collection and get a new computer system running. Go to nwaonline.com/photos to see more photos. (NWA Democrat-Gazette/Ben Goff)

FAYETTEVILLE -- Northwest Arkansas' libraries have closed their doors but are using online offerings and looking for other ways to help people in the wake of covid-19.

The Springdale Public Library is tracking its online use and saw a 15% increase in Hoopla checkouts over a five-day period, said Anne Gresham, assistant director. Hoopla is a digital media service allowing people to borrow movies, music, audiobooks, ebooks, comics and television shows for use on a computer, tablet, phone or television, according to the company website.

• Rogers: Closed until at least April 17.

"We expect that trend to continue as time goes on and to encompass most of our online resources," Gresham said. "We've also been sending out regular email campaigns promoting library services and content people can access at home, and the click-through rates have been significantly higher."

Sue Ann Pekel, children's librarian at the Bentonville Public Library, said people can access the library through its many online resources for ebooks, audiobooks, magazines, music and more. These resources can all be found on the library website under "eLearning" and are accessible using a library card number and a personal identification number. Resources include programs such as Library2Go with Libby, which has free ebooks and audiobooks; Flipster for free digital magazines; and Freegal for free music downloads, Pekel said.

The library also has been sanitized and disinfected during the closing, she said.

The Fayetteville Public Library's visual library has a digital collection including nearly 800,000 ebooks, audiobooks, comics, magazines, downloadable movies, television series and music. Through a variety of services, such as OverDrive, cloudLibrary, Hoopla, Flipster and Tumblebooks, items can be checked out online, said Willow Fitzgibbon, director of library services.

The Fayetteville library has more than 50 research databases and online services in addition to ebook collections, including a service connecting students with live, online tutors and another offering learning in more than 70 languages, she said.

The library is working with vendors to make sure the services are available regardless of blocks caused by fees or expired accounts, she said.

David Johnson, Fayetteville Library executive director, said on March 30 they will begin a soft launch of a curbside service for material on hold. People will be contacted and a time set to pick up the items, he said.

The Rogers Public Library recently extended its times for the tutor.com service to 8 a.m. to midnight, Director Judy Casey said. The service used to start at 3 p.m. The library is building its ebook collection, and TumbleBooks is making all of its products available without a library card, Casey said.

The library has ebooks and downloadable audio, plus a collection of 60 electronic magazine subscriptions and Freegal music and Mango Languages, she said.

Library staff have plenty to keep them busy while the building is closed, Casey said. A new computer system is being installed, and staff will inventory the entire collection, she said.

The library has hit a problem it can't help people with while the library is closed, Casey said. They get calls every day from people who don't have internet access and who need to use a public computer to fill out a job application.

Johnson said the Fayetteville library is considering opening the lobby with computers. The four computers would be spaced 20 feet apart and sanitizing wipes would be available.

The Springdale library is piloting a virtual book club through its adult programming Facebook group. The library has just subscribed to a service called BrainFuse HelpNow providing live tutoring and homework help, as well as a writing lab, language learning support, citizenship support, and English- and Spanish-speaking tutors, Gresham said.

The library also is in the process of recording story times and posting them to the library website and social media, she said.

The library also has thousands of available online material for cardholders, including ebooks, audiobooks, magazines, and streaming movies, music and television available through its website, Gresham said.

Northwest Arkansas libraries also are extending due dates and waiving late fees. Library staff members take calls from people and use social media to reach out to them, too.

The Bentonville library will extend the due date to May 1 for all items checked out now. As of now, people will not be charged late fees, Pekel said.

People can get temporary cards for access to the library's digital resources by emailing [email protected], Pekel said.

The library serves as a location for free meals through Aramark and Bentonville schools while schools are closed. Each day, lunch and breakfast options are available to kids 18 and younger. Meals are distributed drive-through style.

All students in Fayetteville schools have icards, and the library is able to issue cards to adults who cannot get to the library to apply for a borrowing library card. The only difference in the cards is an internal process for issuing them, Fitzgibbon said.

Gresham said all blocks preventing a person from using Springdale library online resources have been suspended. Library cards with recent and upcoming expiration dates have been renewed for one year, and all due dates have been reset until at least April 15, with the possibility of being extended further. No late fees will be charged while the library is closed.

Rogers has extended dues dates on material and also extended the dates for library cards. The library also is working on an online application for temporary cards, Casey said.

The Rogers library has temporarily opened its exterior Wi-Fi access 24 hours a day, Casey said. People can come to the parking lot and connect to the web.

Casey said she will be glad when the library opens.

"We will be busy as all get out when we get back," she said.