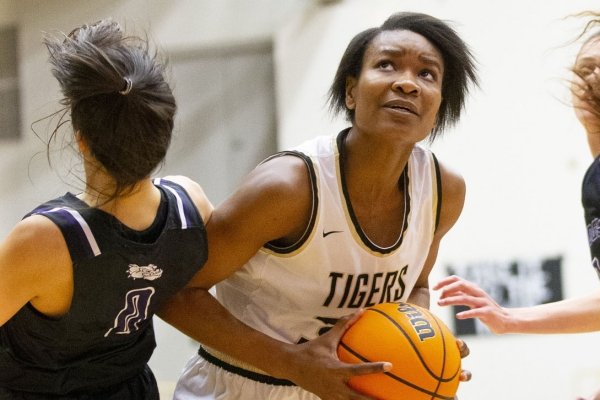 Fayetteville vs Bentonville Girls Varsity Basketball - Maryam Dauda (30) drives to the basket for two points against Fayetteville at Tiger Arena in Bentonville, Ark., on Friday, February 14, 2020.

With the height advantage Maryam Dauda enjoys over a majority of high school basketball players, she could have easily stationed herself near the basket and elected to score the easy points.

Bentonville High's 6-foot-4 junior post, however, viewed things a little differently. If the Lady Tigers were going to make a return trip to the Class 6A state championship game, Dauda knew there was more for her to do than just pick up points in the paint.

Her improvements to all facets of her game this season made Dauda the choice as the Northwest Arkansas Democrat-Gazette's player of the year for its Division I team, which consists of players from Class 6A and 5A schools.

"I was able to have a great season by working and playing hard," Dauda said. "Coming into the season, I wanted to be a more efficient offensive player and have a huge impact on this team.

"I also wanted to be the leader this team needed, so I spent a lot of time in the gym. I also concentrated on being more vocal on the floor and helping out my teammates when I could."

Her scoring included a respectable 20 of 48 shooting (41.7 percent) from 3-point range -- compared to 0 for 8 from beyond the arc a season ago -- and she hit an impressive 92 of 114 (80.7 percent) from the free-throw line. Dauda also set two school single-game records when she hit 14 field goals and scored 36 points in a Bentonville victory over Conway in December.

What makes Dauda's accomplishments stand out more is she only averaged 21.4 minutes -- slightly more than 2 1/2 quarters -- per game.

"I was really impressed with her free-throw shooting, and she had the ability to knock down some timely free throws," Bentonville coach Tom Halbmaier said. "That gave her the sense that her overall game had improved, and a lot of the 3-pointers she hit were in transition. She would get down the floor, then go wide and spot-up so she could be ready to shoot.

"And you look at the games we've played, there were only seven games where Maryam played all four quarters. She had that ability to raise her game in those close games, and she stayed out of foul trouble. She did a great job of not picking up that third and fourth foul in the first half."

Dauda had already rewritten every blocked shot category in Bentonville's record book in her freshman year, but she reached a couple of milestones this year. She scored her 1,000th career point in a victory during a victory at home against Fayetteville, and she became the school's career leader in rebounds during the Lady Tigers' victory over Conway in the Class 6A State Tournament semifinals.

"Getting my 1,000th point against Fayetteville will be something to remember," Dauda said. "Because I was able to do it in my junior year, that makes it feel really good."

Meanwhile, Halbmaier was the NWADG sports staff's choice for its Division I Coach of the Year honors. 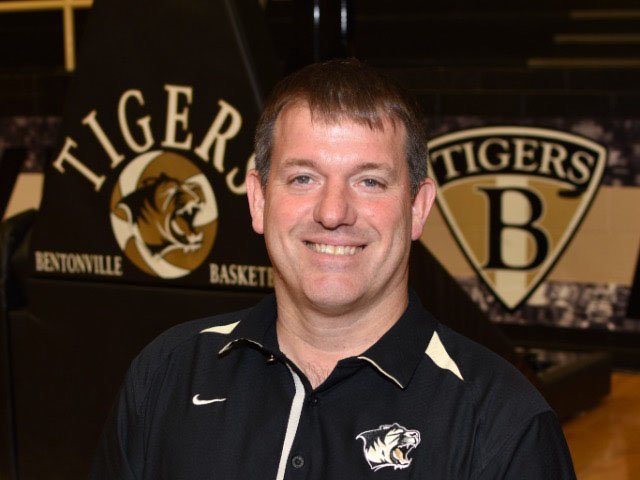 Bentonville coach Tom Halbmaier was named by the Division I girls basketball coach of the year by the NWADG sports staff.

Halbmaier, who just completed his 19th season as Bentonville's head coach, led the Lady Tigers to a 27-1 mark -- the best run in school history. That included a 14-0 run through the 6A-West Conference schedule and a second straight trip to the Class 6A State Tournament championship game, which may not be played after all sports were suspended as of March 13.

"It was definitely a great season," Halbmaier said. "I had a great staff, great managers and great players. All of that made my job a lot easier. All I had to do was focus on coaching and not worry about there being any drama or personality problems on the team. Our girls were focused and had that common goal of getting back to a state championship." 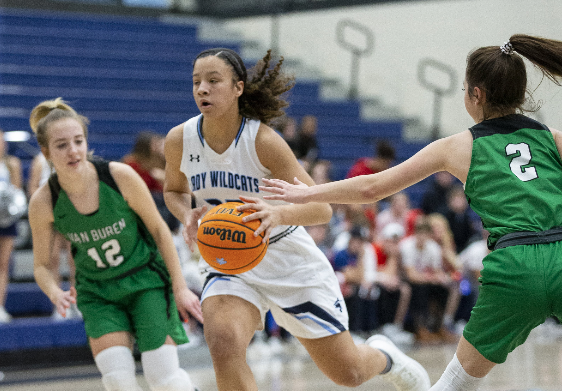 Newcomer of the Year honors for this team goes to Springdale Har-Ber freshman Pacious McDaniel, who played a vital role as the Lady Wildcats earned a trip to the Class 6A state tournament. The 5-foot-8 forward earned all-state honors and was named to the 6A-West's all-defensive team while averaging 13.2 points, 4.7 rebounds and 2.1 steals per game.

Har-Ber coach Kimberly Jenkins said she never thought twice about McDaniel's move to the varsity team, and Har-Ber immediately reaped benefits from it.

"We saw how competitive she was from the moment we moved the ninth-graders in here during the offseason," Jenkins said. "She didn't care if she was going up against a sophomore, a junior or a senior. She was going to get up in somebody's face on defense, and she wanted to win every drill we ran. I felt like she was going to be a great addition to the team.

"She raised everybody's level of play when she's on the court, and she's a contagious kind of kid. Once she got to know people, she became one of the vocal leaders on our bus. She would even reach out and say our team prayers. It was fun to see her blossom as a player, and I can't wait to see what lies ahead."

Averaged 13.2 points, 4.7 rebounds and 2.1 steals per game and earned all-state honors, as well as named to the 6A-West’s defensive team.

Guided the Lady Tigers to the best record in school history and a second straight trip to the Class 6A championship game.

Led the Lady Wildcats with an average of 15.8 points, 4.3 rebounds per game, earned all-state honors.

Memphis signee averaged 13.3 points, 4.5 rebounds and 1.8 rebounds for the Lady Bulldogs and was named an all-state player.

Named to the Class 6A all-state team after she averaged 10.2 points and 2.6 rebounds per game.

All-state player who averaged 7.4 points, 6.6 rebounds per game and credited with her job on the Lady Tigers’ baseline defense.

Earned all-state honors after averaging 16.3 points and 5.3 rebounds per game, a year after she missed the entire season because of knee surgery.