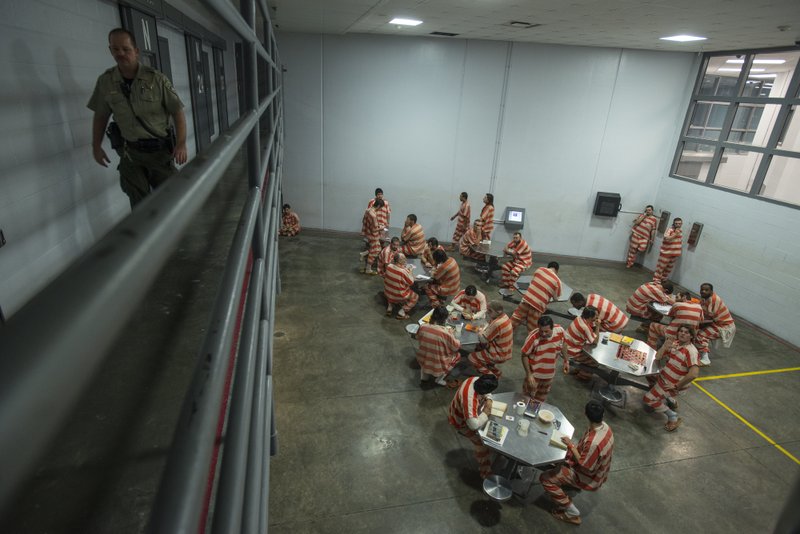 FAYETTEVILLE -- Washington County is releasing another 81 inmates from its jail as officials work to reduce the jail population during the covid-19 pandemic.

Chief Deputy Jay Cantrell with the sheriff's office said Wednesday that prosecutor Matt Durrett and the county's circuit judges approved the inmates from a list of detainees compiled by the jail's staff.

The Washington County Sheriff’s Office is trying to reduce the risk of the covid-19 coronavirus spreading to the jail population by releasing some detainees and asking local police departments to minimize the number of people they bring to the jail. The jail population had been more than 800 in recent months. The number is expected to drop below 450 with the latest releases, jail officials said. The number of people being brought to the jail fell from 55 on March 13 and to 18 on March 24.

Cantrell said the staff is following guidance from state and federal health agencies and is identifying those who might be most at risk from the virus. He said the majority of those being released in this second round were older.

"As before, we've been looking at people with underlying medical issues, individuals who may be pregnant, and those who are 45 or older," Cantrell said. "These are all nonviolent offenders."

The number of known positive cases of covid-19 in Arkansas topped 300 Wednesday afternoon. Gov. Asa Hutchinson announced plans to ban indoor gatherings of more than 10 people as part of the effort to slow the spread of the virus. Schools and many businesses have already been closed.

Cantrell said the county added wrist and ankle monitors to the devices being used, particularly for inmates who have a history of failure to appear in court. The monitors provide more security and more detailed tracking information, including reporting any attempt to disable or remove the monitor.

Some inmates are released with a cellphone app allowing them to report their locations.

The county is paying the $5-per-day cost for individuals who have cellphones and the $15 per day for each person assigned a wrist or ankle monitor. The latest estimate from the county says it costs an average of $62 per day to house an inmate at the jail.

Cantrell said the jail population will drop "south of 450" when the 81 inmates are processed and released. The sheriff's office is trying to have sufficient space to be able to isolate or quarantine any inmates who may test positive for the virus.

Cantrell said Wednesday that no inmates have been tested for the virus. Those who show any symptoms, such as fever, coughing or respiratory distress, are being monitored.

Employees also are being monitored, and they have their temperatures taken and must answer a series of heath-related questions before they are allowed to work. Cantrell said no employees have tested positive for the virus.

Durrett said the county is balancing two safety concerns. He said the safety of people in the jail, both inmates and staff members, is one concern. The general public's safety is another.

"Under the current situation, we want to get as many people as we safely can out of the jail," Durrett said. "We will err on the side of public safety when we're scrutinizing those individuals to make certain they don't pose an immediate threat to the public."

Benton County prosecutor Nathan Smith said Wednesday that the situation at the jail is under control, and he will continue to consider releasing people on a case-by-case basis if it is needed. The jail has a capacity of 669 beds, and the population at the jail was at 562 on Wednesday.

Stan Adelman, an attorney and law professor hired last summer as a jail ombudsman to explore ways to reduce crowding in Washington County's jail, said he thinks this experience could provide some guidance once the immediate health crisis is past.

"We're all still learning from this," Adelman said. "Maybe in the future, we can take a couple of steps back and see if some of these things we're doing now in a crisis can be incorporated into our regular processes and regular practices."