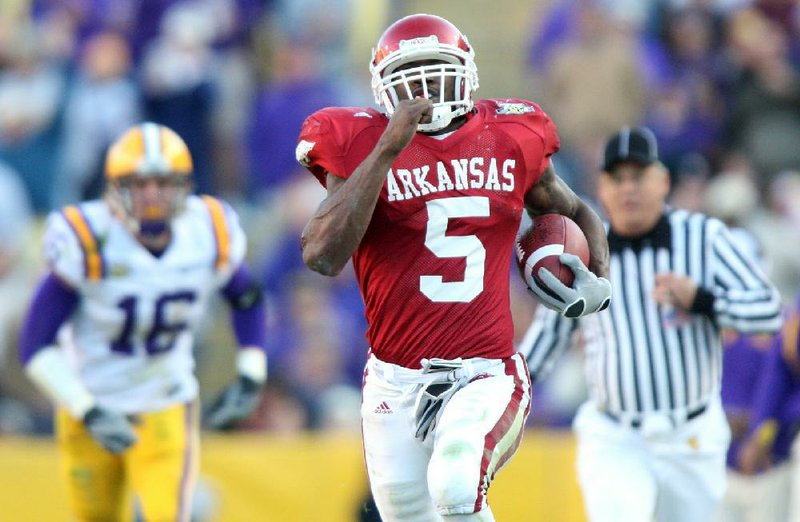 Running back Darren McFadden breaks free for a 73-yard touchdown in the third quarter of Arkansas’ victory over top-ranked LSU in 2007. McFadden rushed for 206 yards and 3 touchdowns, and he also threw a 24-yard touchdown pass to Peyton Hillis. (Arkansas Democrat-Gazette/Jeff Mitchell) - Photo by Jeff Mitchell

Most of the sports world is on hiatus, and the time away is hard to bear for many fans. Luckily, the state of Arkansas has produced a bounty of memorable sports moments throughout the years. To help us through the lean times, we will relive some of the best in the weeks to come.

This article appeared in the Nov. 24, 2007, edition of the Democrat-Gazette.

In between, Arkansas put together a performance on Friday that will be talked about for generations by the Razorbacks and their fans.

The story will go that an Arkansas team left for dead after losing its first three SEC games rallied around beleaguered Coach Houston Nutt and stunned LSU 50-48 in three overtimes, almost certainly knocking the No. 1-ranked Tigers out of national championship contention. 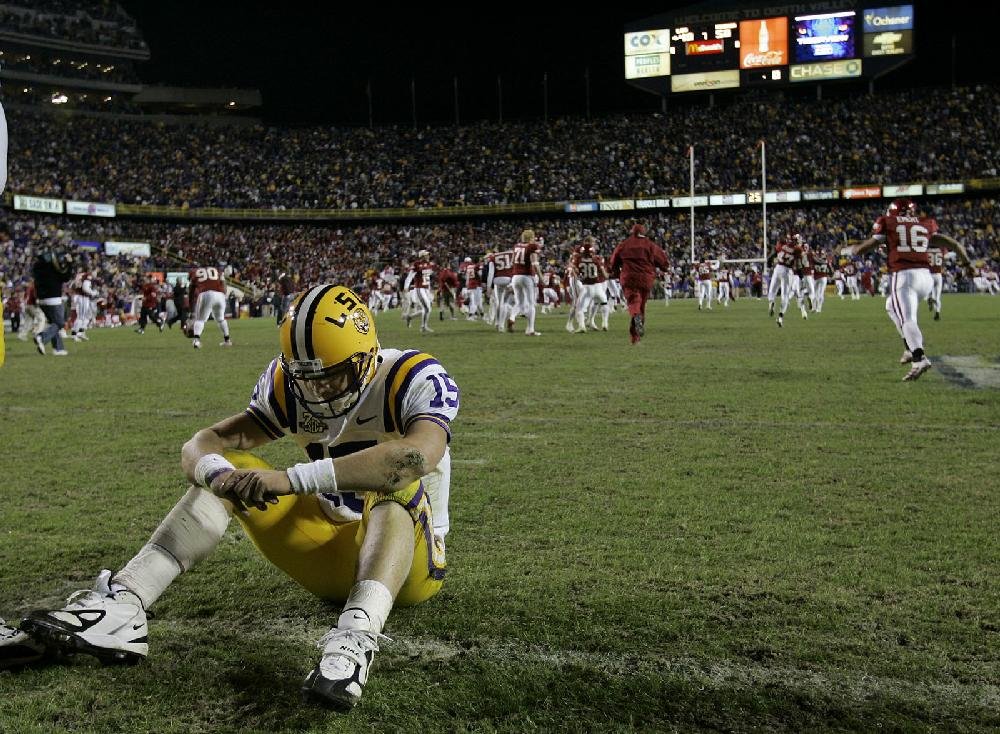 LSU quarterback Matt Flynn sits on the field as Arkansas players celebrate their victory over the top-ranked Tigers. Flynn was intercepted by Arkansas’ Matterral Richardson on a two-point conversion attempt in the third overtime to give the Razorbacks the victory. (AP file photo)

"We couldn't have written a more perfect script than to finish the season like this," Arkansas tackle Robert Felton said.

"To be on the road, to be in this environment, this is something our kids will remember forever," Arkansas defensive coordinator Reggie Herring said.

Arkansas (8-4, 4-4 SEC) might have played its way into another Cotton Bowl after going into Baton Rouge and winning as a 13-point underdog. The Razorbacks returned to Northwest Arkansas with the massive Golden Boot trophy, which goes to the winner in this border rivalry.

"We've got a great place for it in the Broyles Complex, I can tell you that," Nutt said. 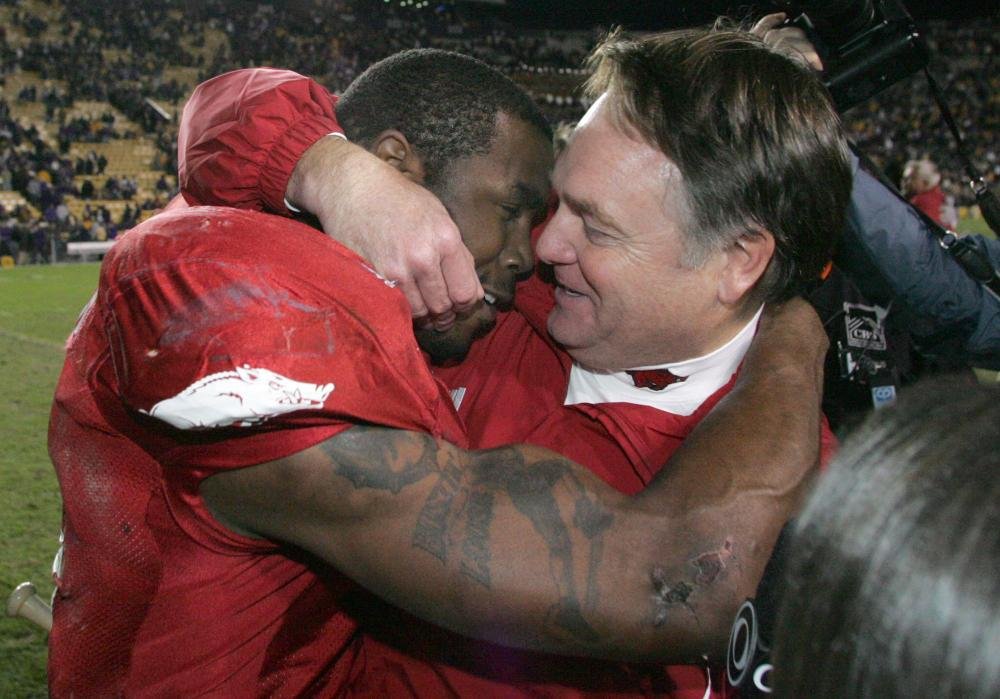 Arkansas Coach Houston Nutt (right) hugs running back Darren McFadden after the Razorbacks’ 50-48, three-overtime victory over top-ranked LSU at Tiger Stadium in Baton Rouge on Nov. 23, 2007. It would prove to be Nutt’s final game as the Razorbacks’ coach. (Democrat-Gazette file photo)

LSU (10-2 overall, 6-2 SEC) will play in the SEC championship game next week, but the Tigers will not be playing for the national title in New Orleans on Jan. 7.

"We understand that this cost us and what was at stake," Miles said.

It was a perfect confluence of events for the Razorbacks, who beat a No. 1 team for the first time in 26 years, set a school single-season scoring record with 478 points, improved their all-time record in overtime games to 7-1 and broke a four-game losing streak against LSU.

Arkansas put up 385 rushing yards and 513 total yards, both season highs against LSU.

"I'll talk about it for the rest of my life," Arkansas linebacker Weston Dacus said.

McFadden stormed into Nutt's postgame television interview and stormed right back into the Heisman Trophy dialogue with a tour de force showing on national television against the nation's No. 2 defense. 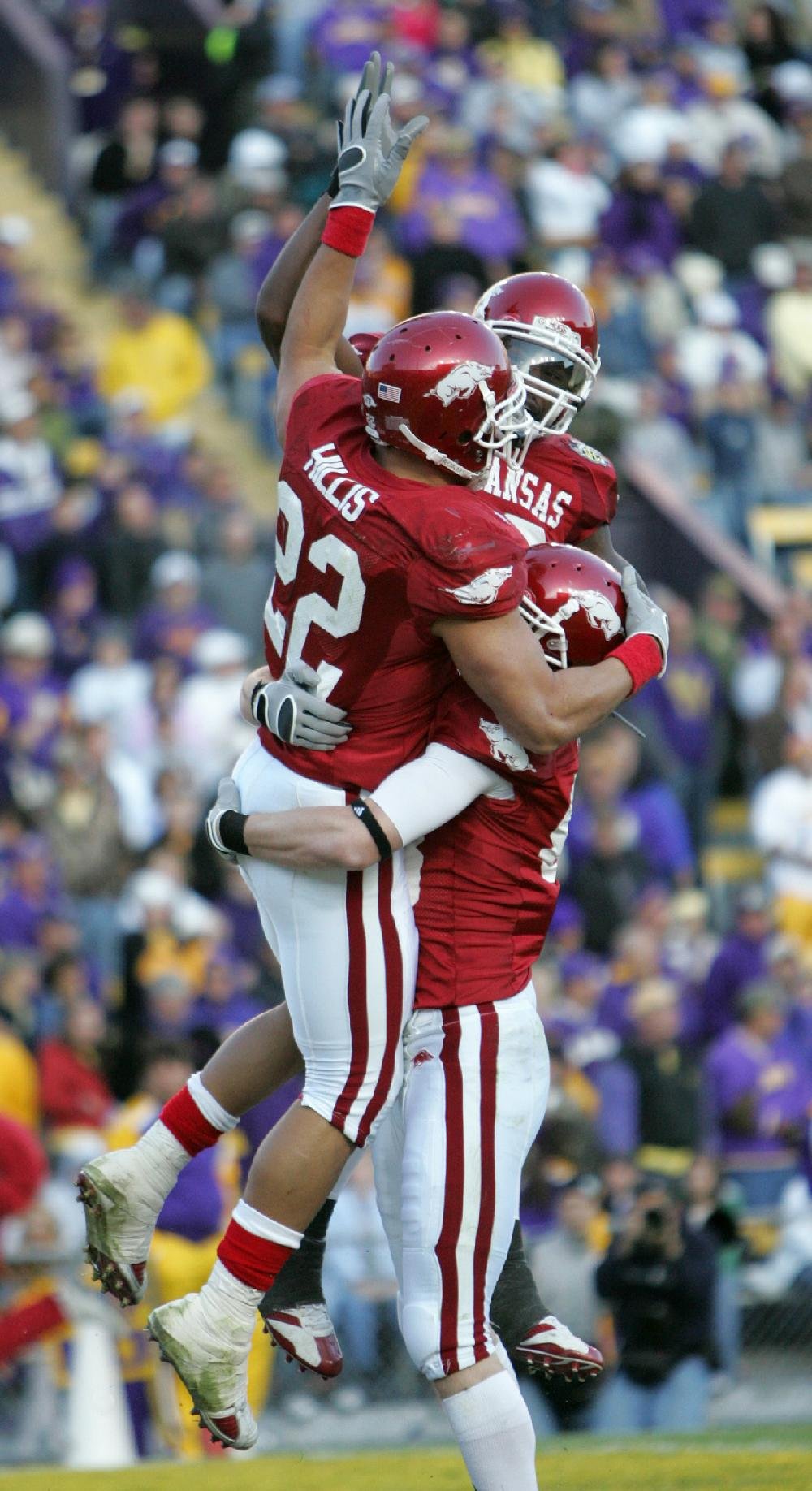 Running back Peyton Hillis (22) celebrates with teammates after scoring a touchdown in the second half. Hillis scored four touchdowns in the game, including two of Arkansas’ three scores in the overtime periods. (Democrat-Gazette file photo)

McFadden ran for 206 yards and three touchdowns and threw a 24-yard touchdown pass to Hillis with 5:06 remaining that put the Hogs ahead 28-21 prior to the frenzied overtime periods.

"We were 10-1 [last year] and they knocked us out of a chance to go to the national championship," McFadden said. "It's just a great feeling to be able to return the favor."

McFadden directed all four Arkansas touchdown plays in regulation from the quarterback position, including his own 73-yard touchdown run in the third quarter. That play, which included a takeout block 50 yards down field by Casey Dick, gave the Razorbacks their largest lead of the day at 14-6.

"They didn't have a linebacker over our left tackle," Arkansas offensive coordinator David Lee said. "So we put in a play at halftime that wasn't in our game plan. That's the one Darren went 73 on and it unsettled them."

Nutt's personal stake in this game was huge.

With the Razorbacks cheering wildly all around him, Nutt seemed on the verge of tears while embracing his brother, Danny, whose health forced him off of the coaching staff this summer, near midfield after the marathon game. 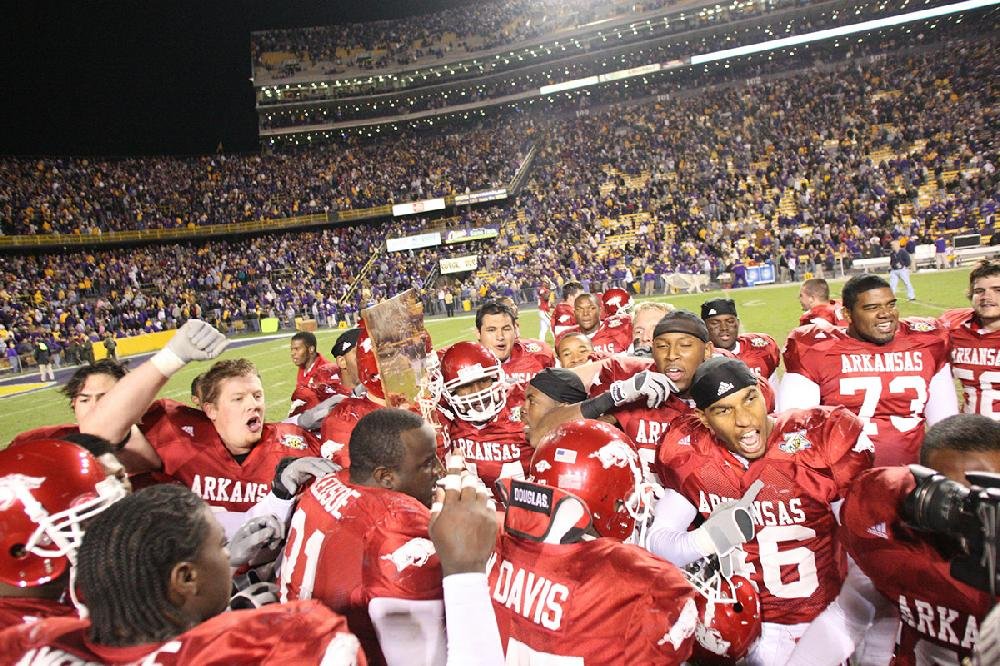 Arkansas players celebrate with the Golden Boot Trophy after defeating LSU in 2007. It was the Razorbacks’ first victory over a top-ranked team since beating No. 1 Texas in 1981. (Democrat-Gazette file photo)

Nutt called this victory, Arkansas' first over a No. 1-ranked team since thumping Texas 42-11 in 1981, the biggest of his career.

"It has to be," said Nutt, who again questioned the validity of news reports last week that said he would resign after the season. "They were ranked No. 1. I always think about [big wins over] Texas and Tennessee, but to come down here in Baton Rouge and win, it was huge."

LSU came up clutch on fourth-down plays down the stretch as it did in its 28-24 victory over No. 7 Florida on Oct. 6. Trailing 28-21 in the closing moments, the Tigers converted a fourth-and-1 on a Matt Flynn lateral to Keiland Williams, then tied the game on Flynn's 2-yard fourth-and-goal pass to Demetrius Byrd with 57 seconds left to play.

Arkansas worked fourth-down magic of its own. Down 35-28 in the first overtime and facing fourth-and-10 from the LSU 25, Dick floated right and hit Hillis for a 13-yard gain to keep the game alive. Three plays later, on third-and-8, Hillis released past linebacker Ali Highsmith on the right sideline and caught a 10-yard touchdown pass.

Arkansas' game-winner came on another Hillis score after McFadden burned the Tigers with a 10-yard run around left end. Hillis crashed up the middle for a 3-yard touchdown, and Felix Jones took a pitch over right tackle on the mandatory two-point conversion try.

LSU's Flynn threw his third touchdown pass moments later, a blitz-beater to Brandon LaFell from 9 yards out. But Richardson took away the inside from Byrd on the 2-point conversion and stepped in front of Flynn's throw to make the interception and stun the sellout crowd of 92,606 at Tiger Stadium.

"The only people who believed were the people in that locker room, our players and coaches," Richardson said. "It just feels so good because nobody gave us a chance."