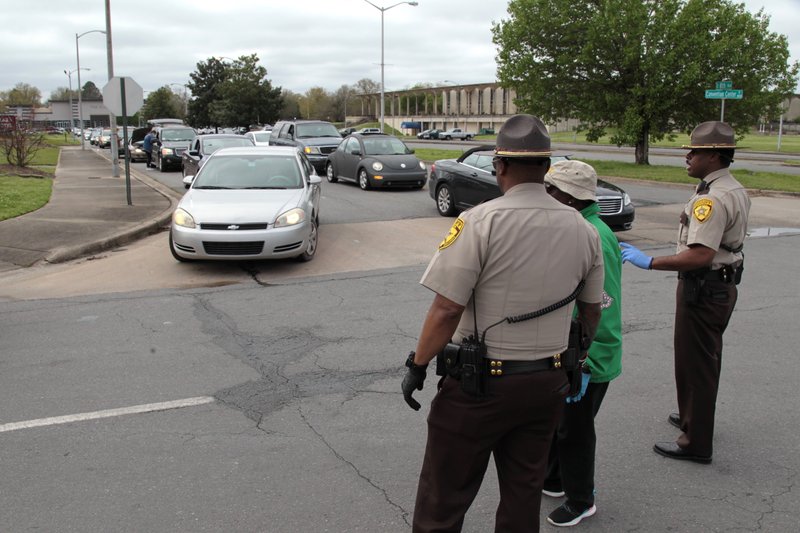 PINE BLUFF -- Tyson Foods Inc. plans to donate more food in Pine Bluff to help families potentially affected by economic instability and unavailability of food in stores because of the coronavirus pandemic.

The announcement came after a report from Little Rock television station KARK that some people had complained that they had received food that was past its "sell by" date stamped on the package.

Tyson Foods -- as well as two entities not affiliated with the donations, the state's largest food bank and the U.S. Department of Agriculture -- say the food is safe. A food bank executive said that to keep such food from going to waste, it is commonly distributed through food banks and pantries. As long as it is properly handled, the official said, such food is perfectly safe to eat.

Even so, Tyson issued a statement in response to those complaints.

"Tyson Foods is committed to providing safe, quality food to our customers, consumers and those in need," read the statement. "We regret providing product past its 'best by' date during the donation event in Pine Bluff and understand the communities concern. 'Best by' dates for frozen items indicate flavor or best quality and do not indicate that products beyond that date are unsafe to eat. Nevertheless, we are working to provide another truckload donation to Pine Bluff and appreciate the community's patience as we work to deliver millions of pounds of donations to hunger relief agencies across the country."

Tyson is one of the world's largest food companies. It regularly donates food to food banks and communities affected by disasters.

Derek Burleson, who handles external communications for the Tyson Foods headquarters in Springdale, reiterated that any of the company's products, so long as they are properly handled, are safe to consume past the "best by" date on the packaging.

"We tried to boil it down as simply as possible in that statement," Burleson said Wednesday. "Best buy dates for frozen items indicate flavor, or best quality, and they don't indicate that products beyond that date are unsafe to eat."

Jacqueline Ross, director of Delta Network Food Bank, which orchestrated the food distribution, said Wednesday that she had been in contact with Tyson officials, and was satisfied that the food given out was safe to eat.

Ross said most of the response she had received was positive.

"We have been dealing with people who have been in distressful situations for a very long time," she said. "The turnout itself gave validity to the need that people have. People would not have stayed in that line, come from the distances that they did, if they had not needed that food."

Ross said although she did not yet have an exact count, well over 1,000 people traveled from all over Arkansas to receive food packages.

Rhonda Sanders, chief executive officer of the Arkansas Foodbank, the state's largest, told the Arkansas Democrat-Gazette the way food is labeled does sometimes lead to misunderstandings, but she said food that has gone past its "sell by" date is generally safe for consumption.

"For us, we look to the date that the manufacturer tells us it is expired, you must destroy," she said. "That is a different date than the one you may see in the store that says 'best if sold by.' Those are two different dates."

Sanders called food banking, which began in 1967 in Phoenix, the "original, no waste organization" that today stands at the forefront of hunger relief efforts in the U.S.

"It is taking food that is no longer marketable for some reason and using it while it is still good to give to people who don't have access to food," she said. "That's what we've been doing since the mid-'60s. But we do have very high standards of training for food safety because we do not want to hand out anything that is expired, or would be bad for someone."

"That is not an industry standard and there's no law about it," she said. "That is our standard, what we try to do on anything we get in. And we do distribute meat that has gone past its 'sell by' date, as long as it remains frozen and meets the manufacturer's guidelines. Our standard is a year past."

According to the USDA website, dates used in food labeling of meats are intended as guidelines to indicate when the period of peak freshness ends, but are not intended to be indicators of when a given food item, if properly handled, is no longer safe to eat. The USDA said there is no uniform requirement for date labeling, but some commonly used terms and their meanings are:

• "Best if Used By/Before" date indicates when a product will be of best flavor or quality. It is not a purchase or safety date.

• "Sell-By" date tells the store how long to display the product for sale for inventory management. It is not a safety date.

• "Use-By" date is the last date recommended for the use of the product while at peak quality.

• "Freeze-By" date indicates when a product should be frozen to maintain peak quality. It is not a purchase or safety date.

Burleson said that no date has been set for a second food distribution in Pine Bluff but said that should be announced soon, and will most likely be in April.