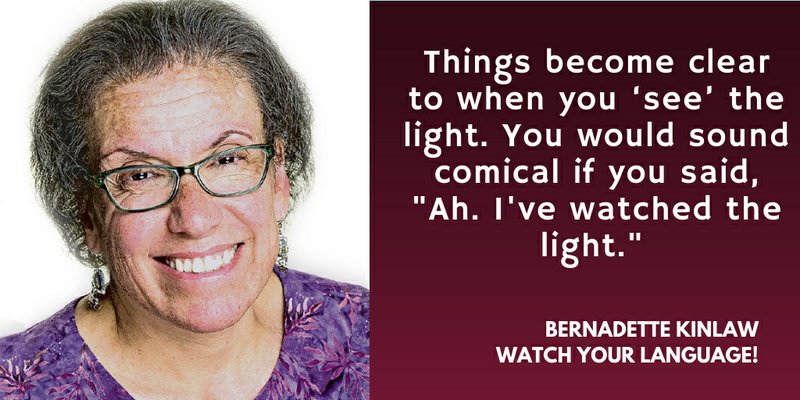 Basically, we are using our eyes. But the three verbs have distinct differences.

When you see something, usually it simply happens.

Out on the beach, I saw the sunrise.

When you look at something, you mean to do it. You might turn your head if you hear your child say, "Look at me!"

And when you watch something, you spend more effort than with a casual look.

"Did you watch all of This Is Us this season?"

I had to read these distinctions before I realized this has already been ingrained into me without my knowing. This is another example of some things are easy in our native language but are incredibly hard for someone trying to learn the language.

A child complaining about a sibling: "He's looking at me." Not "He's seeing me."

We have the old-fashioned, "Let's take a look-see." Maybe the first person who said that was confused about the verbs.

When you ask your mom whether you can go to a sleepover, she says, "We'll see." Not "We'll watch."

You look before you leap. You don't watch beforehand. Well, I guess if James Bond is trying to jump from a bridge to a moving train below, he'll watch for a while to choose a car that seems a little softer. Then he'll leap.

I'm not sure photographers still ask you to "watch the birdie," but they once did. That meant you were to keep your eyes fixed on it, not just briefly look at it.

You know that famous watched pot that doesn't boil? Maybe it would boil faster if you just looked at it and then averted your gaze.

When you get angry, you might tell someone you're seeing red. You're not watching red.

Things become clear to you when you see the light. You would sound comical if you said, "Ah. I've watched the light."

Maybe this one is my imagination. But people might command you to look at or watch:

Look at that hit!

Watch that the steak doesn't burn!

But they ask, "See? That person in the painting blinked!"

I have no answers to explain how these distinctions came to be. But they're fun to think about.

We've all seen this phrase a lot more since online shopping has become common. My self-described uninformed source mentioned this to me. It's an adjective to describe physical buildings. I had to look up "mortar," because the word made me think of the mortar and pestle used to crush or grind medicines or spices. But mortar is the glop used to hold the bricks together.

So, nearly any news article about shopping these days mentions brick-and-mortar stores to distinguish them from online shopping sources.

Convenience is not the point. They are seeking something social and experiential, and that's a huge opportunity for brick-and-mortar retailers.

Maybe I'm being overly optimistic, but I think saying, "I'm going to the store" is a clear enough phrase. We don't need to tell people we mean a brick-and-mortar store. If I go to online sites, I say, "I'm shopping online."

A reader asked about words containing the root "gress." These words contain a part from the Latin infinitive "gradi," meaning "to go or walk."

"Progress" means a movement forward because of "pro" meaning "forward" and "gress" from "to go."

"Digress" means to stray from a forward path. The "di" comes from the Latin root for "apart."

"Tigress" is a different story. That means a female tiger. But guess what: Seeing a tigress would make me want to egress immediately.

This week I heard this phrase "cold comfort" on a TV show. I hadn't realized how great a phrase it is. It means a fact or a situation that offers less consolation than one needs.

You normally associate comfort with warmth. Imagine watching (not simply looking at) a favorite old movie while it's snowing outside. The fire is crackling in the fireplace. You're sitting under a blanket that your grandma knitted, and you're drinking hot chocolate. That's comfort.

In a completely different context: You've spent four years going to an elite university, and you've learned so many things. But you've been looking for a job for a year, and you can't find one. Your degree is likely cold comfort. Probably not even cocoa will cheer you up.

Print Headline: O say can you see, or watch, or look?