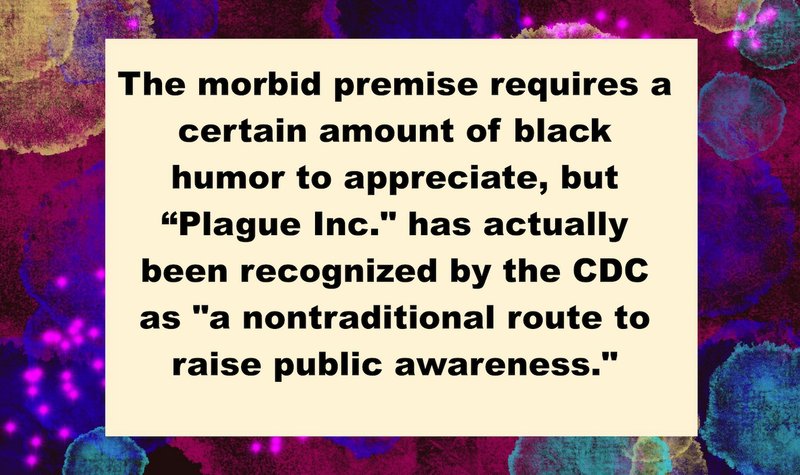 With the coronavirus pandemic affecting daily life in virtually every aspect, I thought it'd be a good time to check out a disease simulator game, "Plague Inc.," that seems to surge in popularity whenever illness dominates headlines.

In "Plague Inc.," players control one of 11 types of transmissible illnesses that can infect Patient Zero. The core goal of the game is to infect and kill the entire world population by evolving and adapting the disease before humanity finds a cure.

While its morbid premise requires a certain amount of black humor to appreciate, "Plague Inc.," which has asked players to remember that it's a game and not a scientific model, has actually been recognized by the Centers for Disease Control and Prevention for using "a nontraditional route to raise public awareness on epidemiology, disease transmission and diseases/pandemic information."

The game recently made headlines when, despite having been extremely popular in China for years, it was suddenly banned by the Chinese government and removed from sale there.

While "Plague Inc." deals with a serious topic, there are no graphic images and it has a fairly serious, nonsensational tone.

Starting the game, players choose from several difficulty levels: Casual, Normal, Brutal and Mega-Brutal, with each level based on several gameplay factors. For example, in Casual mode, no one washes hands. But in Brutal mode, people are compulsive hand-washers and sick people are immediately quarantined in prisons. Mega-Brutal mode increases the world's investment in scientific research and makes it harder to evolve your plague.

The next step is to choose what type of illness: At the start, bacteria are the only choice. Earning victories unlocks more plague choices and Genetic Codes. With the codes, a "gene" can be inserted at the beginning of the game that personalizes the pathogen, boosting how it infects people, reacts to environments and general gameplay.

The core pathogen types are bacteria, virus, fungus, parasite, prion, nano-virus and bio-weapon. Expansions and scenarios add more diseases, such as Black Death and swine flu. There are also some fictional diseases, such as a Necroa virus that turns people into zombies, and a Simian Flu similar to what happens in the movie Planet of the Apes.

Then, the country of origin is selected. This will have some effect on the pathogen, giving it cold or heat resistance, for example. And factors such as population, the country's health care system and transportation infrastructure will have an effect on gameplay. The key to winning is to evolve your disease appropriately, striking the right balance between spreading it quickly and its lethality and other symptoms.

Infecting people and killing people award points that can be used to evolve the disease, but if the disease is too lethal, it will quickly be noticed by world health authorities and countered, or it may kill all its hosts and die out before it can spread further.

A standard beginning strategy is to evolve traits that increase transmission, such as by allowing the disease to spread via birds, mammals or mosquitoes, and through water or air, before adding serious symptoms that can lead to death. However, many of those serious symptoms make it spread faster; spread too slowly, and health organizations will catch on and start working on a cure.

Each game does not take long to play, maybe about 15 minutes, with a slider that can speed up the passage of time. There's a lot of replay value, however, because winning the game through multiple diseases, scenarios and pathogens unlocks more content. And the way to approach winning with each disease and difficulty level can radically change gameplay, so some experimentation is needed.

Developed by U.K.-based Ndemic Creations in 2012 for mobile devices, "Plague Inc." has sold 130 million copies and was remade for consoles a few years ago with additional game features. A couple of those features are its multiplayer modes. In Co-Op mode, two players each unleash a disease on the world, with redesigned traits and new abilities, working together to infect everyone. In Versus mode, players struggle for viral dominance, attempting to infect the world and eradicate the rival disease.

For those who want to be on the frontlines in the fight against global illnesses, I can't recommend enough the board game Pandemic. Pandemic is a cooperative board game for two to four players (up to six with expansions) who take on one of seven specialist roles to cure diseases that are spreading across the world.

Just make sure everyone washes their hands before playing.

For people cooped up inside and practicing social distancing, playing games is a great way to relieve stress and boredom, so definitely consider giving these games a try.