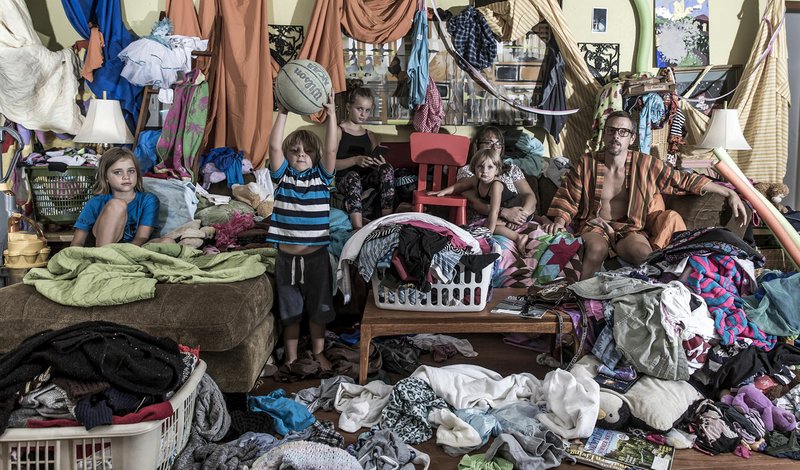 Kat Wilson's "Habitat" series gives lush insight into the subjects' lives and lifestyles. Wilson is offering art lovers a chance to learn how to style and shoot their own Habitat portraits in a series of Facebook Live videos. (Photo courtesy/Kat Wilson)

Artist Kat Wilson's photographic series called "Habitats" was a phenomenon from the moment it was unveiled at the Delta Art Exhibition at the Arkansas Arts Center in 2004. Wilson's concept was deceptively simple: Photograph people -- singles, couples, families -- in their living spaces, surrounded by objects that helped define their lives. The photographs are so exquisitely styled, you could spend long moments staring at them and still find new details. The lighting, moody and dark, is evocative.

"You can't imagine how many people have asked me to make a Habitat for them," says Wilson from her home, where she and her family are self-quarantining in order to avoid the coronavirus. "I wanted to photograph everyone. I wish it was my full-time job, but it isn't. There were a lot of people I had planned on doing, though, so I think this is our chance. We're all quarantined, and, I think, next week we'll be quarantined a lot more."

Find Kat Wilson’s live instructional videos on how to style and shoot your own Habitat photograph at facebook.com/katographic. Wilson says she’ll be filming new videos every day at 6 p.m.

What Wilson means by "our chance" is this: She plans on sharing her tips on how those of us at home can style and photograph our own Habitat portrait through a series of Facebook videos. In the first installment, she's starting with the subject of "iconography" -- helping watchers choose the items they want to represent their lives.

Wilson uses a bow and arrow as an example of something she might use in her own Habitat photograph, saying it can "indicate the hand-eye coordination of an artist."

"What does a bow and arrow mean? It means strength. A broken arrow means peace. A lily means death. A red rose means romance. Mistletoe, if you put that in your photo, that could symbolize love. A bunch of dried beans and toilet paper could mean you're in the great quarantine of 2020."

Wilson says she'll also post links to videos on YouTube that enhance the topic she's teaching in each video installment.

"Every Habitat I've ever done was a collaboration," she says. "I really look forward to seeing what you guys are doing.

"Northwest Arkansas is an arts community. I want to see all of my friends doing this."

In addition to learning a new artistic skill, viewers of Wilson's videos will be privy to her vivid personality and sense of humor -- a real plus in these trying times.

"This is a way for me to cope," she says. "I've felt better in life. I'm not sleeping well. But, hey, I'm glad everybody is here, and I'm glad that you're going to do your own Habitat.