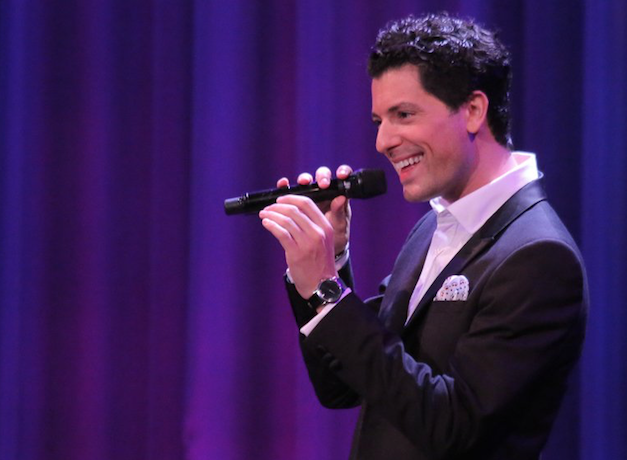 Fort Smith native Jonathan Karrant will perform a live-stream concert from his family's home in the Arkansas city at 7 p.m. Monday. Karrant is a succesful and popular singer who lives and works in Las Vegas and throught California, New York and points in between. - Photo by Special to the Democrat-Gazette

Jonathan Karrant finds himself with time on his hands. Normally, he’d be in Las Vegas, where he lives, or San Diego or New York, where he works regularly, singing his heart out for adoring audiences.

On Friday he was busy preparing grape leaves for a Greek feast while staying with family in his hometown of Fort Smith. The grape leaves are a homage to his family’s Greek heritage and one of the jazz singer’s favorite dishes. When the meal is done, he can return to preparing for a special Monday evening concert that he’ll be streaming live from his family’s living room in Arkansas to fans in America and around the world.

Karrant says there are already people from China and Italy signed up to watch, likely a sign of these isolated times. Those watching from afar can show their love with comments of 140 characters or less (to prevent spamming) and also send tips.

The streaming platform Karrant will use is called Stage It, (stageit.com), and it’s purpose is to give artists a direct line to their fans so they can perform short, intimate concerts and make a little extra cash. Or not.

Music fans can sign up easily on the website and search the shows and artists. Once you have an account, you can buy Stage It’s virtual currency, called Notes, for 10 cents each. The minimum purchase is $5 or 50 Notes. The cover charge for Karrant’s show is 35 Notes, or $3.50. You can keep the change, or use the virtual tip jar to spot Karrant and other Stage It performers some bucks the same way you’d do in a bar or lounge.

Artists who have already done shows or are signed on to the live streaming service include George Clinton, Jon Bon Jovi, Sara Bareilles, Bonnie Raitt, Common and Indigo Girls. Karrant finds himself in great company.

[Video not showing up above? Click here to watch » https://www.youtube.com/watch?v=WPPRUiaqSJ8]

For Monday’s approximately 45-minute show, Karrant will be accompanied on piano by Little Rock musician Dell Smith, who has played for Gladys Knight and Dee Dee Bridgewater, among many others. “I usually play with at least a three-piece band,” he says, but when he’s here Smith is his go-to accompanist and sound guy.

Karrant says he first met Smith several years ago when he was invited to perform for the annual Woman of the Year gala that benefits Centers for Youth and Families, and they’ve been playing together when Karrant is in the state ever since.

Despite the convenience of being hunkered down with family in his hometown, Karrant did not come to Arkansas to run from the covid-19 virus.

Karrant is proud of his Arkansas roots, but in order to pursue his dream of being a singer with an appreciation for jazz and American Standards, songs that never go out of style but are continually updated and restyled, he had to leave.

Just two days after graduating from Fort Smith’s Southside High School in 2002, Karrant left for New York to pursue a career in music. On his website, jonathankarrant.com, Karrant’s biography tells of an arts- and culture-filled upbringing and a yearning to perform.

“Jonathan sang for hours every day, honing-in on his own type of music and style. When he was seven he began singing publicly. His first solo was at his church with Nancy Vernon, musical director and organist, directing and accompanying him. Then, that summer in Eureka Springs, he walked into a nightclub, made his way to the stage, and asked the band to accompany him while he sang ‘Stormy Monday’. The band agreed, and he was a big hit with the audience, as well as with the band.

“As a teenager Jonathan was active in local theatre, and studied music and theatre in middle and high schools. After graduating from high school, director/writer/actor Meir Z. Ribalow recommended him for an intensive course of study at the William Esper Acting Studio in New York City. During this time he auditioned and was hired by the Metropolitan Opera House to play characters roles in performances, one of them being the opera Aida starring Luciano Pavorotti. It was an extraordinary time for him, working at the Met in major productions at Lincoln Center, brushing shoulders on stage with great stars.”

And it eventually led to all this. Karrant’s album On and On hit No. 4 on the Billboard jazz charts, and the album Live hit No. 2 on the iTunes jazz charts. He’s been honored by the New York City Cabaret Jazz Honors, named best singer by the Bravo California Awards and was named one of the top 12 rising jazz vocalists by Downbeat magazine.

But for the time being, Karrant is just an Arkansan with a taste for Greek food and a yearning to perform.