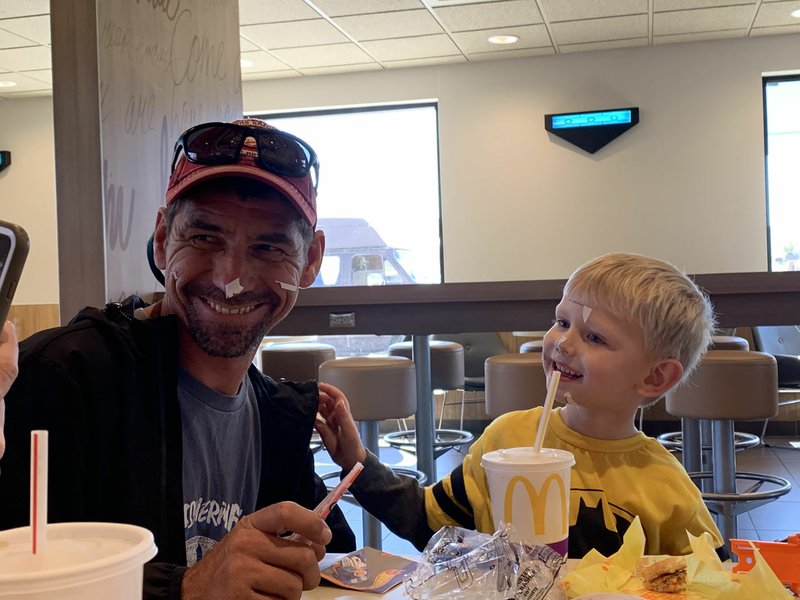 Wesly Casebolt and his mom's fiance, Eddie Harrell Jr., pose for a photo after a happy Happy Meal. You have to finish your food before you play with your toys, Wesly reminds. (Special to the NWA Democrat-Gazette/Victoria Burnett)

Wesly Scott Casebolt is a happy, hyper and cheeseburger-loving 4-year-old.

But he hasn't always been. In fact, he used to be Wesley.

Wesley was a child who went days without eating, was beaten for wetting himself and was told that monsters would get him if he didn't lay still at night.

Wesly and Wesley are the same person, but two very different little boys. Being adopted by a family member is what changed -- or saved -- his life.

After years of abuse and neglect, Wesly was put in foster care then adopted by a member of his extended family, Royal Casebolt, 39, and now lives in Gravette. Though parents are the ideal guardians of their children, they are not always able to provide safe environments for them. When this is the case, a kinship adoption like Casebolt's is preferred and becoming more popular, according to Foster Trends.

Wesly is one of the millions of kids in the United States who has endured abuse and neglect, but he was given another chance at life by Casebolt. She adopted Wesly in June and changed his name after fostering him for almost a year.

"That boy has got more love than anybody I know," she says.

Casebolt originally took Wesly in as a foster child with the intention of giving his biological parents time to get sober and clean and ready to be parents again.

"After I had seen the decisions that his parents were making, had I chosen not to adopt him, he would have gone back into foster care and ended up with I don't know who," she says. "I didn't want to raise another child, but I love him, and I'll do whatever I have to for him."

Being a parent to a child who has endured abuse comes with a great sense of responsibility. But the result can be a more positive and healthy adult, according to the Child Welfare Information Gateway. As Wesly's mother, Casebolt makes multiple trips to speech therapy, occupational therapy, physical therapy and play therapy appointments to help him recover.

And therapy is perfectly normal for a child who has lived the life Wesly has. Processing abuse, neglect and adoption is how children are able to recover, says therapist Jeni McIntyre with the Children's Safety Center of Washington County. Kinship adoption makes this growth easier because of the existing bond and trust with a family member.

"Adoption is trauma. It's like a death," says McIntyre. "It would be the same as processing the death of a family because you have broken that attachment, and that's grief."

It's almost hard to believe that Wesly has experienced such grief -- and that he didn't know how to play when he moved in with Casebolt. As he puts stickers on his face and rolls around the toy car that he got in his Happy Meal, Wesly looks like he's in his natural habitat. He's doing what any 4-year-old boy should be doing. But reaching this point has taken a lot of patience and love from his new mother.

One day while Casebolt was crying from having a conversation with her son about the loss of her grandchild, Wesly had no concept of what was happening.

"So I brought him close to me and I explained: 'This is what we're talking about. What we're feeling is sad,'" she says. "So he's related a little bit with sadness. but it's more like his main emotion is, 'I'm mad.' 'I'm angry.'"

Anger oftentimes is one of the only emotions that children who have endured abuse can understand and feel, says therapist Caitlin Houk with the Children's Safety Center of Washington County. It can cover up feelings of loss, hurt and sadness.

"Anger is typically a lack of something," she says. "But it's the easiest feeling to feel for a lot of kids and the easiest one to express as well. And the one that gets the most attention."

Kids can recover from abuse and neglect, but often adoption is a trauma in itself, Houk says. Some children who have suffered abuse and are unable to live at home need to work through the trauma of living in foster care or being adopted. If children cannot remain in their original home, kinship adoption is often the next best option.

Children who have endured trauma often take the blame for what has happened to them, Houk says. Abuse is not something that should happen; it's not a normal experience, and the kids need to know they're not alone. Having a strong support system is incredibly important to the healing process, and Casebolt has been just that for Wesly.

"There are times that he has his anger outbursts," she says. "I just find that holding him -- even though he says it hurts, you know you're not hurting him -- just holding him tight. Let him feel it. That has come to help us."

Another person Wesly could count on throughout his adoption process was Jeff Larson, a volunteer court appointed special advocate for CASA, a program that provides abused and neglected children with a supportive worker.

As an advocate for Wesly, Larson's job was to find where he would be the safest and happiest, and he decided that was with Casebolt. He worked with a Department of Human Services employee to find a family member that might be willing to adopt Wesly and spoke with Casebolt about her interest in fostering and adoption.

"Reunification is always a goal with the parent, but we also have concurrent goals," he says. "Ultimately for us, it's whatever is best for the child."

In Wesly's case reunification wasn't an option. His biological parents are not allowed to contact or see him, Casebolt says. Because returning home was deemed unsafe, kinship adoption was what Larson and his caseworker decided would be best for Wesly.

"The best moment would definitely have been the happy adoption," Larson says. "There's no question. Knowing where he came from -- when there's an adoption, it's all high-fives and pictures and tears and all that kind of stuff. It's hard, really, to not appreciate that."

Larson was an integral part to helping Wesly transition to Casebolt's custody and why she calls him absolutely phenomenal.

Wesly and Larson were instant buddies, Casebolt says. During the adoption process Wesly was hesitant around people, but really clicked with Larson.

"Wesly would tell everybody, 'That's my buddy. He drives a big old truck,'" she says.

"My buddy!" Wesly chimes in, his big smile showing teeth that might not have ever been to the dentist before he was adopted by Casebolt, his long-sleeved Batman shirt covering arms that only had had his 6-week shots until she took him to get caught up.

The transition to being a Casebolt has been a blessing to both Wesly and Royal. But it was a transition full of taking him to get his eyes checked, his teeth checked, and signing him up for daycare and therapies. It was no easy task, but getting help from people like Larson made it easier.

And it's all worth it when she sees the look on his face when he discovers new things.

"He didn't know what something as simple as peanut butter and jelly sandwiches were," Casebolt says. "The first time I had seen his face eating a peanut butter sandwich, his eyes got really big, and I asked if he liked it and he says, 'Yeah, that's the best ever!'"

First he wanted to be named Rebel, but Casebolt wouldn't let it happen. They agreed on Wesly Scott. And that's who he is.