Here and now: Taking a stroll through the Momentary, the new Walton Foundation-funded space for art and performance 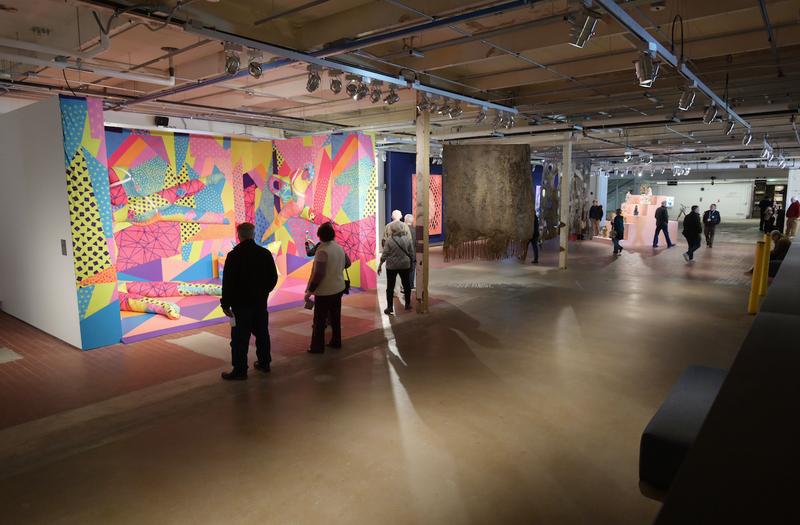 Visitors look at works in the “State of the Art 2020” exhibit, which is on display at The Momentary, a new space for art and performance in Bentonville. (NWA Democrat-Gazette/Spencer Tirey)

BENTONVILLE -- It's the last Friday in February, and I'm at the Momentary.

I've fallen in with a group visiting from the Walker Art Center in Minneapolis, which is being guided through the "State of the Art 2020" exhibit.

Lieven Bertels, executive director of the brand new Momentary, a 63,000-square-foot arts and performance space funded by the Walton Foundation that opened a week earlier, is off to the side of the group in the Lobby Gallery. He is dressed in jeans and a sport coat over a button-down.

Bertels is from Belgium, a country filled with cycling fanatics, so we briefly make small talk about bicycles and the 2022 Cyclocross World Championships that will be held in Bentonville.

The Walker Art Center crew continues its tour, and Bertels has drifted off.

I forgot to ask about the significance of the name -- a perfectly fine adjective repurposed as a noun -- behind this former cheese factory. 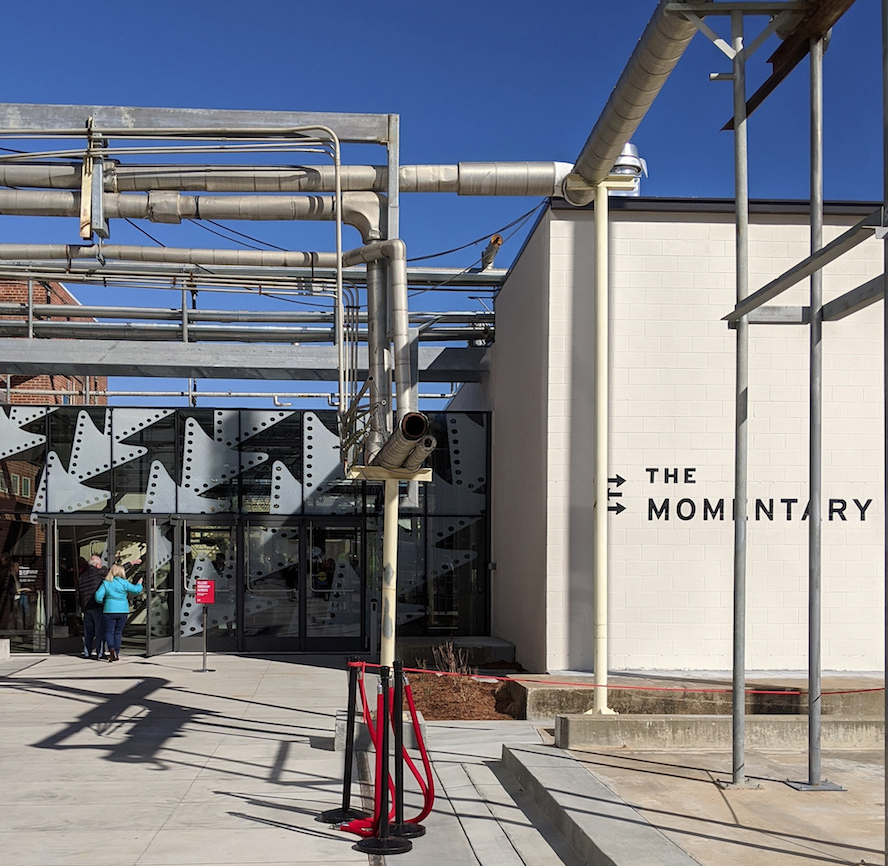 The main entrance to The Momentary in Bentonville. The art and performance space funded by the Walton Foundation, which was once a Kraft cheese factory, opened last month. (NWA Democrat-Gazette/Jocelyn Murphy)

I drove up earlier that morning from North Little Rock not entirely sure of what to expect.

In a Feb. 22 Democrat-Gazette story about the grand opening, Momentary chairman Olivia Walton called it "a grittier, multidisciplinary arts space, the rebellious younger sister, if you will," to nearby Crystal Bridges Museum of American Art.

Crystal Bridges, which opened in 2011, was founded by Alice Walton, the Walmart heiress and aunt of Olivia's husband, Tom Walton and brother-in-law, Steuart Walton, the trio behind The Momentary.

I wasn't sure how a space created by billionaires could be considered remotely gritty or rebellious.

It's not, really, but it does have its charms and, judging from its lineup of events, ambition.

Admission is free, and the Momentary's main entrance on the south side is bright and inviting. Windows and the glass ceiling are covered with an arrow pattern created by Oklahoma-based artist Addie Roanhorse,

who is a member of the Osage Nation and who was inspired by Osage attire, according to a brochure. The pattern can also be found in a space called the Container and on the glass exterior of the building's Tower.

To the left is the gift shop, where friendly people behind the counter offer help for first-time visitors. To the right is the Atrium, Onyx Coffee Lab and Rode House, the latter of which is one of the features that distinguishes The Momentary's mission from that of Crystal Bridges.

The Rode House -- branded such after "founding funder" Rode Microphone company -- is a performance space with an adjustable floor and can be used for movie screenings, concerts, fashion shows and other events. On Feb. 22, Courtney Barnett, the brilliant Australian singer-songwriter, performed a sold-out show there as part of the Momentary's grand opening events, and I'm still traumatized that I missed it.

The mind still sort of boggles at the thought of Gordon, the picture of '80s and early-'90s New York boho-noise-art-rock-scene cool, playing along to an Andy Warhol film in the Arkansas hills.

Other attractions this year include a monthly film series; the Arkansas New Play Festival, April 10-11; an April 16 show by Norwegian singer-songwriter and performance artist Jenny Hval; Freshgrass Bentonville, a music festival featuring Alison Krauss, Old Crow Medicine Show, Steep Canyon Rangers and more than 20 other bands, April 24-25; and Nick Cave: Until, an exhibition and immersive space by the American artist that opens July 18 and addresses subjects like gender, race and gun violence.

The curators and programmers here aren't messing around. 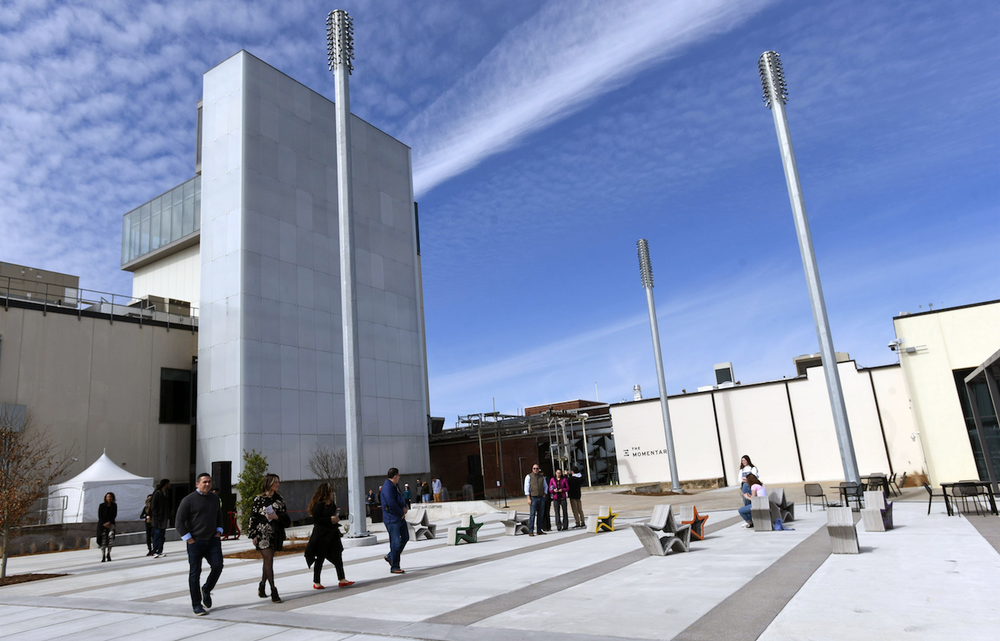 The Momentary in Bentonville, which opened in February 2020, is designed for temporary exhibits and performances.

I'm sauntering through Gallery 1 when I ask a woman if she is with the Minnesota group.

Nope, she says. She's from Austin, Texas, and has come to Bentonville to see the new version of "State of the Art," which is up at both Crystal Bridges and the Momentary. She was here for the original Crystal Bridges show in 2014, she says, and has been waiting patiently for this year's exhibition, which is on display through May 24.

She had no idea the Momentary was even a thing before she traveled from Texas but says she is impressed with the place.

Gallery 1 flows into Gallery 2, and it's not hard to imagine that up until it closed in 2013 this was a factory. Designed by the Waltons and Wheeler Kearns Architects, concrete, exposed pipes and shades of gray are abundant. There are also reminders throughout of the building's former life as a Kraft cheese plant, like the warning to "KEEP FORK TRUCKS AWAY FROM COOLER WALLS" written in black on a pair of heavy sliding doors in Gallery 1.

There's a Boiler Room and a restaurant called The Breakroom, which is where Kraft workers once took their repasts.

Through Gallery 3 I find Fermentation Hall, where cheese was once aged and which is now a performance area and space for installations (I walk in there and am quickly ushered out by a surprised member of the crew putting together Tania El Khoury's performance piece Gardens Speak, which was up through March 8).

Two small spaces, Hydration Column and Culture Column, are adjacent to Fermentation Hall and are evidence of how the designers have incorporated even the nooks and crannies of the factory into spaces for art.

A low-lighted mezzanine with a seating area overlooks Galleries 1 and 2 and offers a good vantage point to take in the breadth of Suchitra Mattai's "State of the Art" piece Exodus, a curtain-like work made of vintage saris that takes up a big chunk of the west wall of Gallery 2. I watch as the Minnesota bunch is guided through the installations below.

I climb the stairs to another mezzanine level to be puzzlingly met by Joanna Keane Lopez's A Dance of Us (un baile de nosotros), a site-specific installation of adobe brick, mud plaster, aliz and mirrors. It's the only thing in this spot and seems a bit awkward and lonesome. 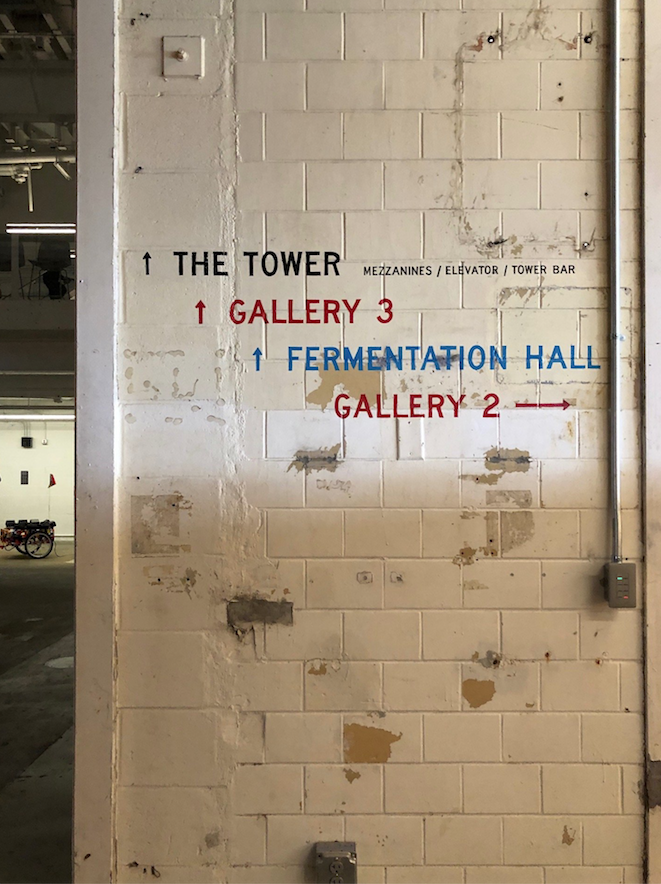 Reminders of The Momentary’s former life as a Kraft cheese factory remain throughout much of the space. (Arkansas Democrat-Gazette/Sean Clancy)

It's time for food, so I descend the stairs and head for The Breakroom and its fast-casual fare.

I pass on the Shepherd's Pie served in a hot jar and get a plate lunch of Grilled Tofu, Arkansas Golden Rice, Twice-Cooked Radishes and Kale & Brussels Sprouts Salad.

I text a photo to my wife, who replies: "You do know this is a cheat day, right?"

Well, this makes cheat day even more delicious. The tofu is firm and tasty and the radishes, with maple-fish sauce, caramel, peanuts and cilantro are heavenly. The meal is also a solid reminder that one of the aims of the Momentary is to bring culinary arts events here.

The Breakroom is situated on a raised surface overlooking Gallery 1. I sit at a stool and plan to people-watch during lunch, but there aren't that many people, just a small trickle of art lovers and the curious wandering past. (Walmart, that other Walton family endeavor, has the Momentary beat for side-eyeing fellow humans.)

I find out later from a worker in the gift shop that things are a bit slow today, although traffic should pick up after the Tower Bar opens at 5.

An official-looking woman with an ID badge on a lanyard comes by, and I flag her down to ask what's the deal with the Momentary's name.

She tells me that it reflects the nature of performances and exhibits at the space. There is no permanent collection like down the road at Crystal Bridges, just the art that is here now and gone later and replaced with something else.

She then asks if I'd like to see the Tower Bar, though it's not officially open for a few hours.

Well, yeah. She calls ahead and tells someone up there I'm on my way. 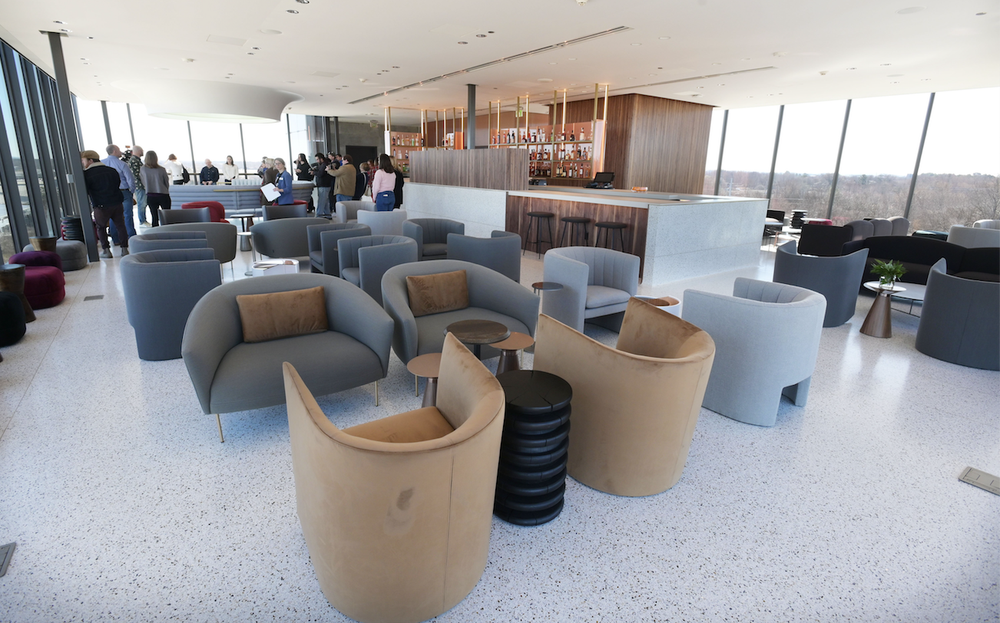 The Tower Bar at The Momentary has a mid-century vibe and offers panoramic views of Bentonville. (NWA Democrat-Gazette/Spencer Tirey)

The bar has a midcentury cocktail lounge vibe and panoramic views of Bentonville through large windows.

It's a gorgeous afternoon -- bright, breezy and not terribly cold. I walk downtown and see photographs of the Arkansas and Mississippi Delta by Matt White of Little Rock's genuinely gritty White Water Tavern at Oven & Tap, and then take the Razorback Regional Greenway path to Crystal Bridges, walking alongside some of the flowing mountain bike trails Tom and Steuart Walton have been so instrumental in building and that have helped make this area one of America's premiere cycling destinations.

Upon my return, I see the Momentary Green and canopy for outdoor concerts and other events on the east side of the building. There's also the 70-foot wide, 25-foot tall pink neon sign created by Bahamian artist Tavares Strachan that reads "You Belong Here" on the side of the building, which reminds me of the signs of affirmation and inclusion one sees in a Planet Fitness.

It's been a good day. I came here somewhat suspicious and definitely curious about the Momentary's existence.

Now, I think I understand it better. It's a place for art -- visual art, performance art, culinary art and probably other kinds of art I can't think of right now. It's a place to gather with others and see a movie or a play, to have a meal and a drink and enjoy a view after a long day at work, or amble around and look at the things people have made.

And it will take time -- years, decades -- but maybe someday the Momentary will form its own layer of patina and grit.