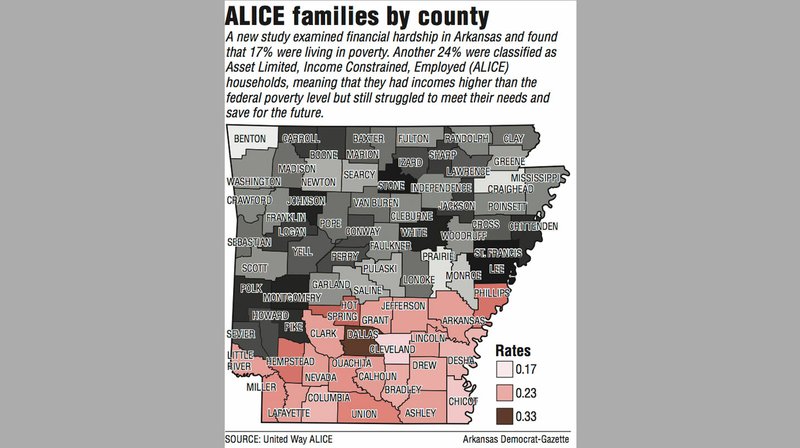 About 24% of Arkansas households draw enough income to place them above the federal poverty level yet not enough to make ends meet or to save for the future, according to a new report.

This means that a natural disaster, unforeseen expense or illness could put these families -- as well as the 17% who earn less than the federal poverty level -- under financial stress, said Stephanie Hoopes, director of United for ALICE, the nonprofit that conducted the research for the report.

"If ALICE would get sick, ALICE doesn't have any additional money for health care," Hoopes said. "ALICE usually works at hourly paid jobs, and to not get paid and forgo a week or two weeks' worth of wages, it could be devastating."

The report, which was generated through a collaboration between Entergy Arkansas, the Winthrop Rockefeller Foundation and national nonprofit United For ALICE, examines 2017 census data, tax data, housing data and other economic information to learn how much money it takes to live in each county and how much each county's residents make.

Hoopes and Sharece West-Scantlebury, president and chief executive officer of the Rockefeller Foundation, both gave covid-19 as an example of an event that could destabilize ALICE families.

"ALICE families have the fewest resources to weather instability and changes," West-Scantlebury said. "I think about now with the coronavirus, and a lot of these workers, this is going to have ripple effects, and those ripple effects will affect our ALICE families most."

Benton County had the smallest percentage of families that earned under the ALICE threshold at 26%. Lee County had the largest at 64%, according to the report.

About 43% of seniors were below the ALICE threshold. Black and Hispanic households were disproportionately likely to be ALICE households, the report says.

The percentage of Arkansans struggling to make ends meet increased by 20% from 2007 to 2017, according to the report.

This means that families who might need government assistance don't qualify for it, Hoopes said.

"The federal poverty line is not sufficient in terms of what it really takes to run a family," West-Scantlebury said.

There have been other studies that have tried to document how much a family needs to meet its basic needs, said Rich Huddleston, director of Arkansas Advocates for Children and Families.

"This is an updated effort of that and also looks at things like technology, and like previous reports it doesn't rely on the outdated federal poverty measure," Huddleston said.

Huddleston's group did not work on the report, but he said it plans to use the information to explore policy and program solutions for Arkansas families.

The federal poverty level was established in the 1960s.

"That number has been increased by inflation ever since, and it's the exact same number across the country," Hoopes said.

"It doesn't take into account the way our budget has changed over time."

Herb Sanderson, state director of the Arkansas chapter of AARP, said his group often sees older people who work longer because they can't afford to retire.

"Around half of all elderly people in Arkansas depend upon Social Security for 50% of their income. That puts them in really a kind of precarious position given they have more health care costs than nonelderly."

Sanderson added that people need more education in their younger years about the way Social Security works and about saving practices.

The report mentions several possible solutions, including more affordable care for the elderly.

"It's just thinking through out-of-the-box ways to be supportive of our families, so if we had across-the-board paid leave, that could go with a worker from job to job, state to state, employer to employer," Hoopes said.