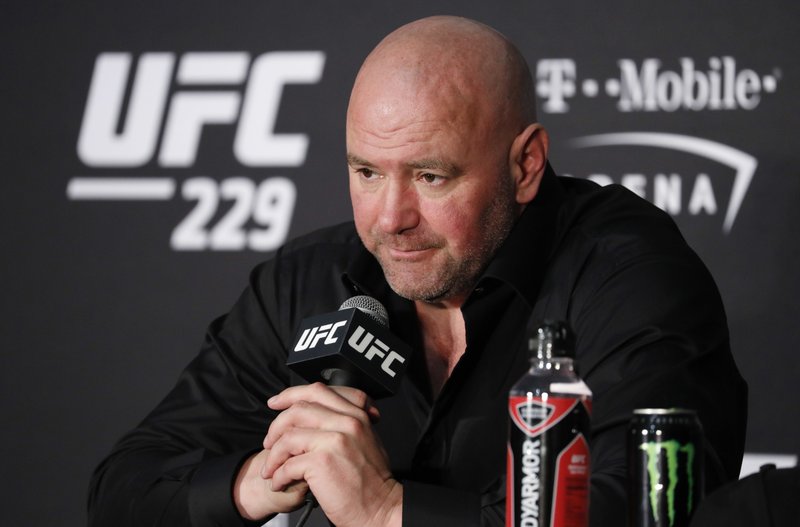 FILE - In this Oct. 6, 2018, file photo, Dana White, president of the UFC, speaks at a news conference after the UFC 229 mixed martial arts event in Las Vegas. The UFC is determined to fight on amid the worldwide coronavirus outbreak. The UFC hasn't canceled any competitions, even those previously scheduled for areas where large gatherings are now banned. White attributes his decision to go against the sports world's collective mindset partly to a conversation Thursday, March 12, 2020, with President Donald Trump and Vice President Mike Pence. (AP Photo/John Locher, File)

While leagues and organizers across sports canceled or delayed competition this week, the UFC proceeded with its plans to hold a fan-free event tonight in Brasilia, Brazil. Next weekend, the promotion still plans to stage a full fight card with fans inside London's O2 Arena.

The UFC hasn't canceled any competitions, even those previously scheduled for areas where large gatherings are now banned.

Instead, the promotion has moved events scheduled for March 28 in Columbus, Ohio, and April 11 in Portland, Oregon, to the new UFC Apex complex in Las Vegas, where it has a small arena and television production capabilities.

"I talked to the president and the vice president of the United States about this," White said on ESPN, his promotion's broadcast partner. "They're taking this very serious. They're saying, 'Be cautious, be careful, but live your life and stop panicking.' Everybody is panicking, and instead of panicking, we're actually getting out there and working with doctors and health officials and the government to figure out how we can keep the sport safe and how we can continue to put on events."

Combat sports are among the most elemental competitive events, with just two fighters and a referee in a cage or ring surrounded by three judges and relatively few vital support personnel. That's a big reason why the UFC believes it can continue while the rest of the sporting world grinds to a halt.

The UFC won't have fans in the stands in Brasilia or Las Vegas, but the competition will go on -- and more importantly to the fighters, they'll get paid in a sport that usually provides no financial compensation to its combatants for their months of preparation and training unless a fight actually takes place.

"I would bet more than half of fighters would expose themselves to coronavirus before not getting to fight," UFC welterweight Anthony Rocco Martin said. "We aren't union and don't get paid to not fight. Most spend all their money getting to their next fight."