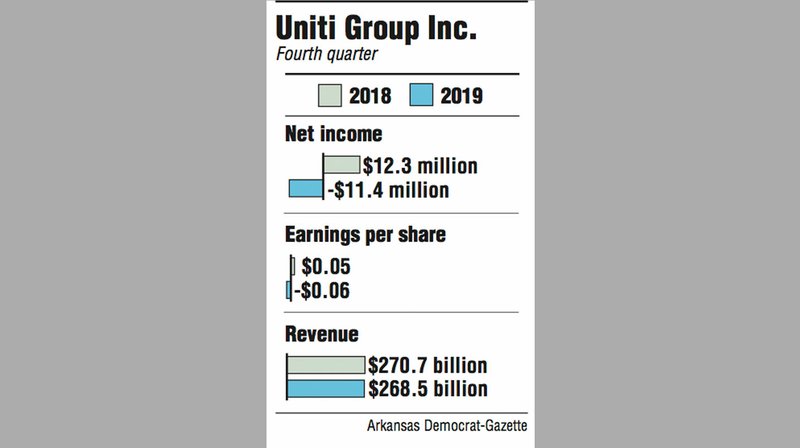 Uniti Group Inc. on Thursday reported an $11.4 million loss in the fourth quarter of 2019 on declining revenue of $268.5 million for the period that ended Dec. 31. The company also reported a 6-cent loss per share in the quarter.

The Little Rock company picked up momentum last week when it reached a settlement agreement with Windstream Holdings to resolve a leasing dispute that was scheduled for a March 2 trial. Windstream remains a Uniti customer and will continue to pay about $650 million annually to lease network access from Uniti.

The Windstream agreement "has significant strategic value for Uniti as it ensures further expansion of our national network footprint in the coming years through on-going fiber deployment," Kenny Gunderman, Uniti's president and chief executive, told analysts on a call Thursday afternoon.

"These fiber investments will significantly enhance the value of our network, and should substantially strengthen Windstream's competitive position," Gunderman added.

During the earnings call, Uniti also announced that it has agreed to sell 486 of its wireless towers to an unnamed buyer for $190 million in cash. The cash sale, Gunderman said, represents 30-times cash flow for the towers, meaning Uniti gained value beyond the cash generated by the towers. Uniti picks up a pretax gain of $30 million, the company said.

However, Gunderman said Uniti will retain ownership of other towers and will continue its tower build-out program. "We are not exiting the tower business," he said.

The company also announced a deal to build new towers in the U.S. and "effectively immediately selling those to our partner" at a profit for Uniti. The initiative will be in place this year with an option to extend the agreement in 2021, Gunderman said.

Earnings were released after the stock market closed Thursday, and Uniti's stock took a hit with a 26% loss, falling to $6.56. The entire market was down 10% for the day.

Settling the leasing dispute was a "mutually beneficial outcome with Windstream," Gunderman said.

The agreement calls on Uniti to invest $1.75 billion over the next 10 years to improve the fiber network that Windstream leases. Those are "long-term fiber investments that are value accretive to Uniti," Gunderman said Thursday.

A court hearing to consider the settlement is scheduled for April 3 in New York.

Last week, the company's board approved a quarterly cash dividend on Feb. 28 of 15 cents per share, payable to stockholders of record on March 31.