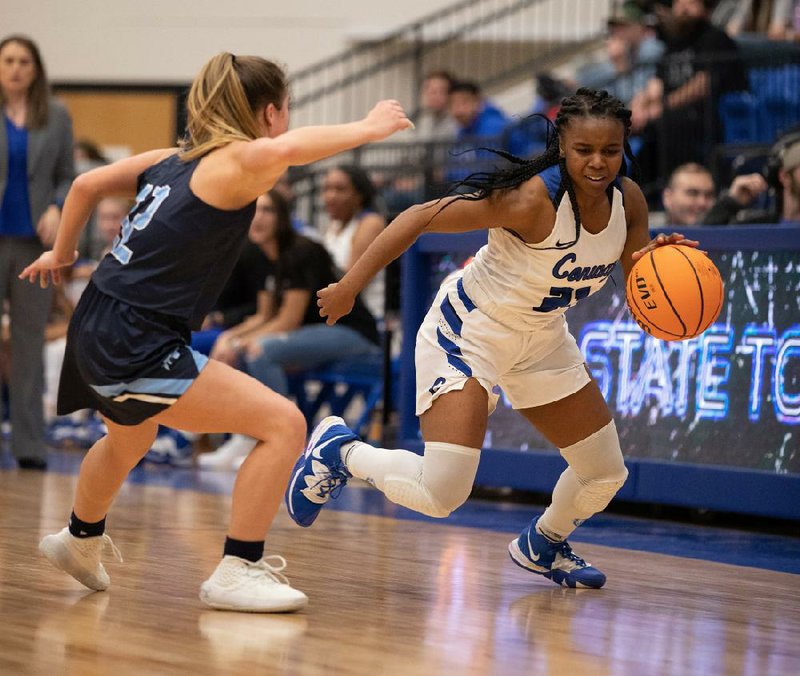 BRYANT -- Conway didn't have its leading scorer for nearly the entire first quarter, but the Lady Wampus Cats did just fine without her.

Junior forward Haylee Malcum finished with 9 points, 8 rebounds and 3 steals for the No. 2-seeded Lady Wampus Cats (22-7), who advance to play Bentonville in Saturday's semifinals by beating the Lady Wildcats for the second time this season. Conway took a 73-57 victory in Springdale on Nov. 29 and was just as destructive in the rematch.

Har-Ber (21-8), which needed six free throws in the final minutes to escape Mount St. Mary on Wednesday, was held without a field goal in the first quarter and seemingly struggled to adjust to the Lady Wampus Cats' quick pace.

Those complications allowed Conway to reel off a 16-0 run over a four-minute stretch and take 23-4 lead after one period despite missing guard Chloe Clardy. The freshman standout picked up two quick fouls with the game barely 1:30 old, but Conway Coach Ashley Hutchcraft said she had an idea about how her team would respond.

"In November or December, I would've been worried," Hutchcraft said. "We've had to overcome so much adversity through the year, which has kind of been the story of our team. It seems like it's always 'what's next, what's next'.

"But I knew we'd be fine because of how great Jadah started off. To play that way with Chloe sitting on the bench is huge for us. Now, that can't happen Saturday, but again, it's the story of our team."

Clardy eventually checked back in at the start of the second quarter and went on to lead the team with 21 points and five steals, but the Lady Wampus Cats continued to get contributions from others in their lineup to keep Har-Ber off point.

Senior guard Lydia York contributed eight points while freshman center Savannah Scott added 8 points, 5 rebounds and 3 blocks for Conway, which led 45-21 at halftime and had a lead as large as 55-28 until ragged play in the fourth enabled Har-Ber to battle back.

"I always tell them to keep the gas pedal down, but when you're dealing with teenage girls, it's common to let up, and that happened some in the third quarter," Hutchcraft said. "I wasn't really pleased with how we weren't able to adjust to the refs, either, because it was called pretty tight. We're a physical team, and we've got to be able to adjust to how the game is being called."

Sophomore guard Caylan Koons scored 14 points and junior guard Kania Starks had 12 points for the Lady Wildcats, who sliced their 27-point deficit down to 14 in the fourth before running out of time. Senior forward Sophie Nelson ended with 10 points for Har-Ber.

Riley Hayes, a junior guard, and Jada Brown, a sophomore guard, each scored 11 points for Bentonville (26-1), which led 35-29 with 5:50 left in the third quarter but scored 12 of the next 13 points to put the Lady Charging Wildcats in a hole they couldn't get out of.

The Lady Panthers closed the game on a 14-3 run to fend off the Pointerettes.

Senior guard Shy Christopher scored 15 points and senior forward Emily Belin finished with 9 points, 7 rebounds and 4 blocks for Cabot (23-5), which led 25-6 at one point in the first half before Van Buren rallied.

The Pointerettes used an 11-0 run in the third quarter to tie the game at 29-29. The teams also were tied at 35-35, but a basket by Belin started Cabot's final push. Senior guard Izzy Arnold hit all eight of her free throws down the stretch to seal it for the Lady Panthers.