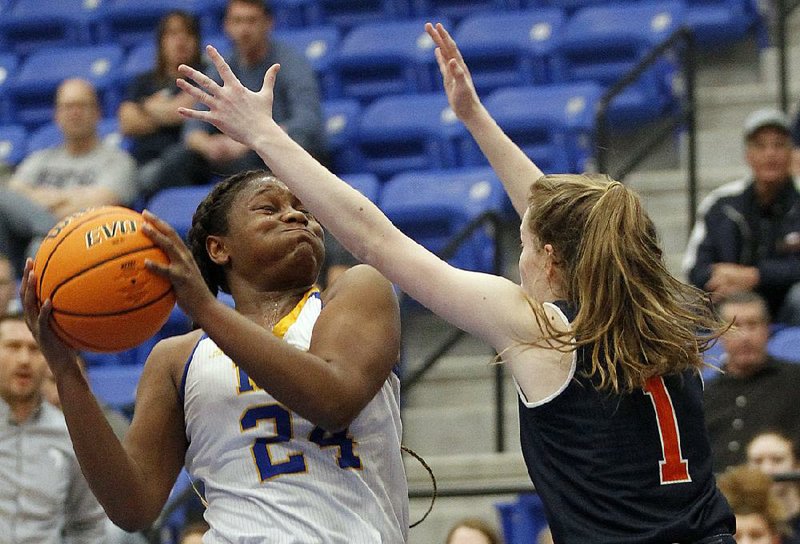 BRYANT -- Nerves may have gotten the better of North Little Rock Coach Daryl Fimple ahead of Wednesday's Class 6A girls state tournament opener, but it didn't take long for him to realize it was all for naught.

The Lady Charging Wildcats swarmed Rogers Heritage from the tip and parlayed a 15-0 run at the end of the first quarter into a 66-21 blowout victory at Bryant High School's Hornet Arena.

Sophomore forward Destine Duckworth had 13 points, 6 rebounds and 3 steals for North Little Rock (16-13), the No. 4 seed from the 6A-Central. Junior guard Arin Freeman finished with 9 points, 6 steals and 4 rebounds as 11 players scored for the Lady Charging Wildcats, who for a team with no seniors showed no fear against Rogers Heritage.

"I was kind of scared Monday and Tuesday because I was thinking 'Holy cow, they don't even realize what this is,' " Fimple said of his team's preparation for their first-round game. "Playing in our conference, you can tell it's a little bit different. I was talking to my freshman point guard [April Edwards] and I asked her was she nervous since it's her first state tournament.

"She said 'Coach, we played Fort Smith Northside, I'm not nervous for this.' "

The same couldn't be said for the Lady War Eagles, who didn't give themselves much of a chance because of a bevy of early turnovers.

Heritage turned it over six times on its first six possessions and didn't get off its first shot until senior guard Lanee Knight hit a sweeping hook with 4:41 to go in the first quarter. The Lady War Eagles finished with 12 turnovers in the period and were down 20-5 after one.

"We were definitely nervous at the start," Rogers Heritage Coach Josh Layman said. "These kids haven't been on this stage, but this is just the first step. The expectation is to get back here next year.

"At that point, we'll be zoned in and ready to go. But North Little Rock played well and did the things they needed to do to win."

Senior forward Aleyshka Pabon ended with 10 points and eight rebounds for Heritage (15-14), the No. 5 seed from the 6A-West. The Lady War Eagles shot 7 of 33 (21.2%) and finished with 24 turnovers. Heritage trailed 41-6 at halftime and 47-7 in the third quarter before finally cracking double figures after a three-point play from freshman guard Carlee Casteel with 4:07 remaining in the quarter.

Sophomore guard Caylan Koons scored 16 of her game-high 21 points in the first half as the Lady Wildcats avoided the upset.

Senior guard Tierra Trotter scored 20 of her game-high 31 points in the first half as the Lady Hornets erased a one-point halftime deficit to blow past the Lady Mounties.

Sophomore guard Parris Atkins had 19 points and senior guard India Atkins scored 17 second-half points for Bryant (18-10), which trailed 32-31 at halftime but outscored the Lady Mounties 40-23 over the final 16 minutes.

Print Headline: NLR way too much for Heritage