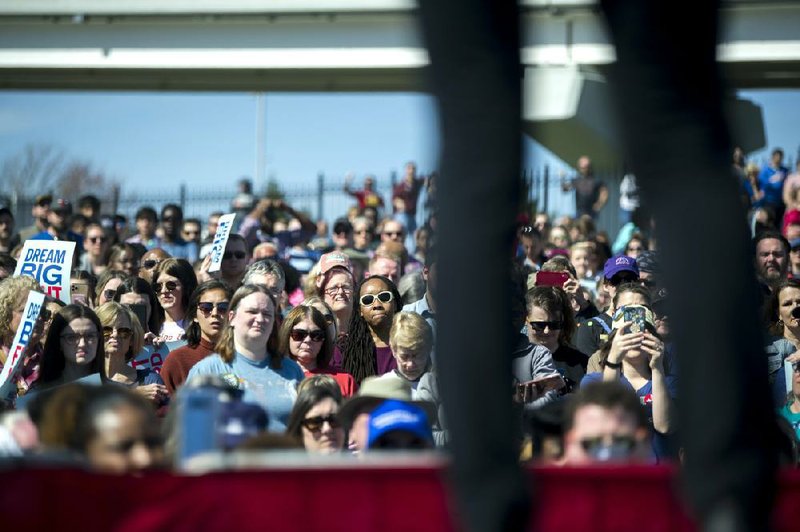 The crowd cheers during a rally Saturday for Democratic presidential candidate Elizabeth Warren at North Shore Riverwalk Park in North Little Rock. Arkansas, with its early primary election, has emerged as a battleground in the race for the Democratic nomination. (Arkansas Democrat-Gazette/Stephen Swofford)

In Bentonville, Vermont Sen. Bernie Sanders bestowed his rancorous style at Walmart's shareholder meeting in June, inveighing the company to share more of its profits with its workers.

Arkansas, with 31 available delegates, is worth less than 3% of the total Democratic delegate share on Super Tuesday. The candidates vying for the Democratic nomination, however, have begun treating the state like a worthwhile battleground.

The reason, perhaps, is due to the lack of a clear front-runner -- or even several -- in this Republican-dominated state.

In dozens of interviews with elected Democrats and other party leaders last week, the Arkansas Democrat-Gazette found that support remained split among no fewer than five candidates. Many said they are still waiting to decide for whom to vote.

"This is really about the first time in 30 years in which there's not been a favorite daughter or favorite son in one of the contests, or someone like Al Gore, who is very clearly identified with a major figure from Arkansas," said Andrew Dowdle, a political science professor at the University of Arkansas, Fayetteville, whose work focuses on the presidential nomination process.

Hillary Clinton carried Arkansas in a rout during competitive Democratic primaries in 2016 and earlier in 2008, following up on the easy victory by her husband, then-Gov. Bill Clinton, in 1992 en route to the presidency.

Retired U.S. Army Gen. Wesley Clark of Little Rock had dropped out of his primary run by the time Arkansas voted in 2004, though nearly a quarter of the state's Democrats that year cast their ballots for "uncommitted" delegates. Arkansas was one of the last states to vote in 2000, by which point then-Vice President Gore faced only nominal opposition while carrying the state.

Before the 2016 election cycle, the Arkansas Legislature voted to move the state's primary up in the calender, from May to March, to coincide with the so-called SEC primary of mostly Southern states.

That change generated a flurry of campaign stops to the state by Republicans running in that year's crowded GOP primary, which was ultimately won by Donald Trump. Clinton, a home-state favorite, made a single appearance in Pine Bluff ahead of the primary. Sanders, her opponent, made none. Trump ended up beating Clinton 61% to 34% in the 2016 general election in Arkansas.

"A lot of times, by the time it got to Arkansas, there was one candidate that came out of Arkansas with viability. Last time there were two," said Arkansas Democratic Party Chairman Michael John Gray. "There's a real possibility to see, potentially, four come out with delegates, which would be a real change for us."

After having the state's airwaves mostly to himself earlier in the campaign, Bloomberg has since been joined by five candidates competing on the delegate chart -- as well as billionaire investor Tom Steyer -- in running television ads in Arkansas.

Steyer was planning to drop out of the race Saturday night after his showing in the South Carolina primary.

Dowdle noted that the party's demographics in Arkansas are different from the states that have already voted or will have voted by the end of Tuesday. About 15% of the state's population is black, according to the U.S. census, a smaller portion than in other Southern voting states like South Carolina. The state also lacks a major metropolitan area dense with more progressive voters, he said.

To gauge support among the party's leadership, the Democrat-Gazette attempted to survey all 33 Democrats currently serving in the Legislature. Of the 27 who responded or who have publicly announced endorsements, more than half said they remained undecided in the final week before the election, or declined to say for whom they were voting.

Biden's campaign led the others with the support of four members of the Legislature, as well as the endorsements of both David and Mark Pryor, who each served in the U.S. Senate.

In a recent interview, Rep. Scott expressed respect for the other campaigns that had drawn her colleagues' support, but faulted those candidates for not doing enough to connect with minority-group voters.

Close behind Biden was Warren, who has received the backing of three lawmakers in Northwest Arkansas, and Klobuchar, who had the support of two lawmakers and an endorsement from former U.S. Rep. Vic Snyder of Little Rock.

Buttigieg and Bloomberg each had the pledged support of one lawmaker. Bloomberg also has received endorsements from Mayor Scott and his predecessor, Mark Stodola.

"I think she's the most prepared, I think she's got the clearest plans; she's just tough," said Sen. Greg Leding, D-Fayetteville, of Warren, his preferred candidate.

Both Warren and Klobuchar's supporters in the Legislature said that at least part of their support was rooted in the desire to see a woman president.

Of the lawmakers who said they remained undecided, some said they had whittled their choices down to just a few candidates. Rep. Chris Richey, D-Helena-West Helena, said he was stuck between Biden and Klobuchar and waiting to see how each performed in South Carolina. Others, like Rep. David Fielding, D-Magnolia, said the increasingly contentious debates had produced no real winners.

"I'm just so confused," Fielding said. "I really don't like the way they performed fighting back at each other."

None of the lawmakers who spoke to the Democrat-Gazette said they were seriously considering Sanders, the current leader in the delegate count.

Endorsements, however, may not factor as much into voter persuasion as they did when Democrats controlled state government, said Janine Parry, another professor of political science at UA. She noted that some of the state's most prominent Democrats, such as the Pryors, have not been in power for years and do not hold the same sway with younger voters.

"I just don't see it making that much of a difference," Parry said. "Most of the primary voters, they already have their own predilections about who they think can beat the incumbent."

Parry also added that with so many candidates remaining in the field, the possibility is high that no one will emerge with a wide lead in the vote.

That could benefit a candidate like Sanders, whose dedicated base of supporters has notched him early primary victories, despite a lack of establishment support.

"It's always helpful to have validators that local people know and respect," said Robert Coon, a Republican political consultant in Little Rock. But Sanders, he added, "has a base of support out there that is invested in his message and his views."

In order to take delegates from Arkansas into the Democratic presidential nominating convention in July, a candidate must earn 15% of the vote statewide or in any one congressional district. Once that threshold is met, candidates earn delegates proportionally based on their share of the vote, said Gray, the party chairman.

In addition to pledged delegates, Arkansas will be represented by five "superdelegates" -- Gray, Nicole Hart, Kasey Summerville, Dustin McDaniel and Lottie Shackelford -- comprised of party leaders at the convention in Milwaukee.

Information for this article was contributed by Frank E. Lockwood of the Arkansas Democrat-Gazette.

This is a list of contested candidates for U.S. president and the state Legislature in the Tuesday Republican primary. Early voting ends Monday. Incumbents are marked with (i). Candidates who dropped out of the race for president are still on the ballot. Nonpartisan judicial races and contested local races also will be on primary ballots.

Justice of the Peace Richard McGrew

This is a list of contested candidates for U.S. president and the state Legislature in the Tuesday Democratic primary. Early voting ends Monday. Feb. 18 Incumbents are marked with (i). Candidates who dropped out of the race for president are still on the ballot.Nonpartisan judicial races and contested local races also will be on primary ballots.