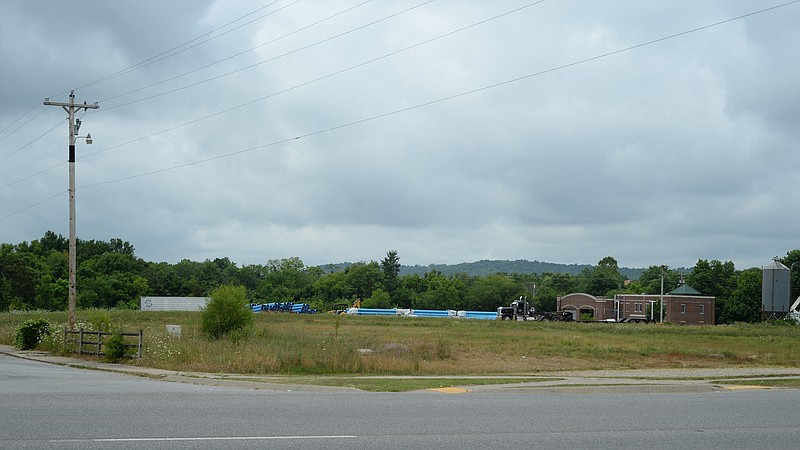 Traffic passes the site Friday of a planned Kum & Go conve- nience store on Huntsville Road in Fayetteville. The land was formerly home to a Tyson plant before it was purchased by Fay- etteville in 2004. Go to nwaonline.com/200630Daily/ for today’s photo gallery. (NWA Democrat-Gazette/Andy Shupe)

FAYETTEVILLE — Development plans for a Kum & Go on the south side of town that came and went in 2013 are back.

The Planning Commission has approved the site plan for the gas station and convenience store at Huntsville Road and Ray Avenue, just east of Happy Hollow Road. The store will sit at the northeast corner of 12 acres that was the home of the Tyson Mexican Original plant.

The property has a storied history.

The city bought it in 2004 for $1.1 million after the Tyson plant folded. Then-Mayor Dan Coody had an idea to use it as a joint command center for police, fire and courts, but the plan never came to fruition.

The vacant building briefly served as a relief center for Hurricane Katrina evacuees in 2005.

Over the years, the building came down and a fire station was built along Happy Hollow Road near Fairlane Street. Kum & Go bought its 2 acres in 2013 for just more than $1.1 million and, subsequently, a development plan was approved. The city still owns the remaining 8 or so vacant acres.

Kum & Go plans to build a 5,000-square-foot convenience store with a canopy for 10 gas pumps near Happy Hollow and Huntsville roads in south Fayetteville.

The Planning Commission has approved a site plan for a Kum & Go at Huntsville Road and Ray Avenue, just east of Happy Hollow Road.

Kum & Go, headquartered in West Des Moines, Iowa, and the city entered into a number of agreements to split the cost of road improvements associated with the development, and the 2-acre piece was rezoned for commercial use. The traffic light at Happy Hollow and Huntsville roads was upgraded. Happy Hollow was widened for a turn lane from the south heading west onto Huntsville Road. Cost of those two projects was about $240,000, shared between the two entities.

The city also plans to widen Ray Avenue to make room for new curb and gutter with sidewalks and green space.

A driveway is planned to extend from the Happy Hollow/Huntsville Road intersection into the property.

The development plan the city approved after Kum & Go bought the property in 2013 expired after a year of no work at the site.

Dan Garneau, site development manager with Kum & Go, said the company plans to start construction in late summer or early fall, as soon as the city approves a building permit.

The store should open in spring, he said.

The store is one of two or three the company plans to build in Northwest Arkansas next year, Communications Director Ariel Rubin said. The company chose to bring back the plan for the site in south Fayetteville based on population growth and traffic patterns in the area, she said.

Susanna Brinnon, who lives near the site, spoke to the Planning Commission during its online meeting June 22 and said the area doesn’t need another gas station. One exists a half-mile east at Crossover and Huntsville roads.

A better use for the site would be stores, restaurants or a park, she said.

“I thought the city wanted to encourage walking, rather than more cars,” Brinnon said.

Commissioners said the city’s hands are tied because the land sale agreement is still in place. However, there are still opportunities for the vacant portion of the property.

Commissioner Tom Brown encouraged some type of a public-private partnership to bring a mix of commercial and residential uses there.

The area gets a lot of truck traffic and serves as a sort of transportation knuckle, Commissioner Porter Winston said. The site plan shows a grocery area at the store that people might walk to, especially with new sidewalks and access points planned, he said.

“I do feel this is an appropriate business to bring into that space, even though it might not be as ideal as say a public park or something like that,” Winston said.