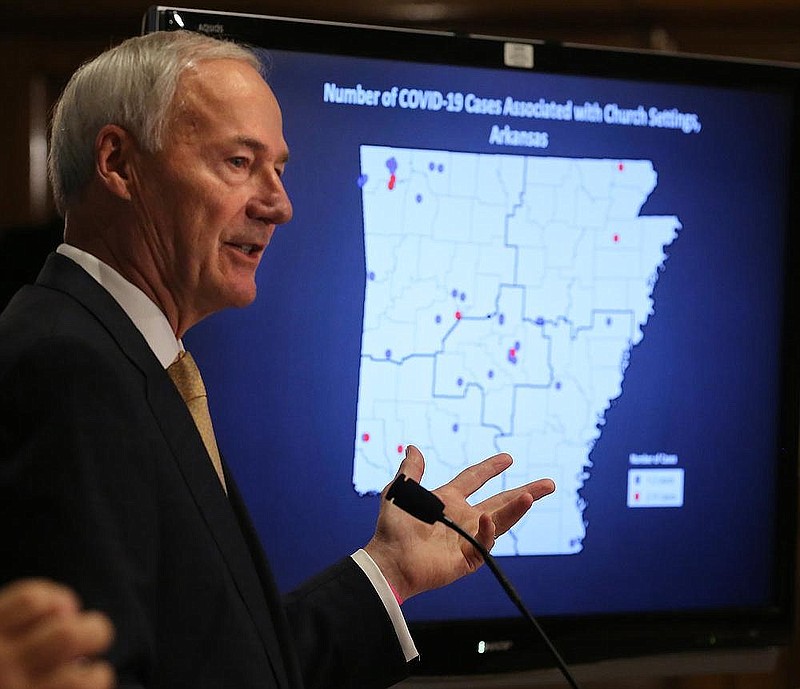 Gov. Asa Hutchinson shows a breakdown of covid-19 cases associated with church settings during the daily covid-19 briefing on Friday, June 26, 2020, at the state Capitol in Little Rock.

Churches are being treated differently from other entities when it comes to reporting on coronavirus, say some faith leaders whose houses of worship have appeared on a state Department of Health list as having documented exposure to covid-19.

The list was released late last week amid a recent surge in overall new cases of the virus.

Forty-four congregations were on the list, although one of them, Oak Hill Church of God in Forrest City, was erroneously listed, health officials later said.

Peniel Church of God in Bentonville is among those featured on the department's list; its pastor, Edgar Rojas, said he closed the church to in-person worship earlier this month after a man tested positive for covid-19.

"I got a little aggravated when I read that," Rojas said of being on that list. "Gas stations and retail stores where there have been cases or exposure aren't being reported on [by the department]. They just singled out churches, and it's not right; churches don't bring revenue to the government -- Lowe's and Home Depot and restaurants, they do."

Before the pandemic, the church averaged 150 worshippers on Sundays, and averaged around 47 attendees in the weeks after it reopened. The church adhered to health guidelines, Rojas said -- members wore masks and used hand sanitizer; markings on the carpet helped the congregation comply with social-distancing guidelines, and family units kept apart from one another.

Shelia Edwards, first lady at Nashville's Lifeline Ministry Church of God in Christ, said she and five other members of the congregation tested positive for covid-19.

The congregation is a small one -- there's around a dozen members, she said -- and since March, everyone entering the church for worship has had their temperature checked, and worn masks and gloves while at the building. Hand sanitizer has been readily available, and the church was sanitized each Sunday before and after services.

Now the state knows about the health challenges half the congregation has overcome.

"To just point the church out was kind of hurtful," she said. "Not that we're ashamed, because this virus is everywhere."

"I had some members call me and say, 'I'm so sorry, the [authorities] were talking to me, they didn't tell me they were going to put this out there,'" she said. "I said to them, 'They asked you about contacts, and you did what you were supposed to do. Don't you feel bad about it.'"

Carl Staten, pastor of Little Flock Primitive Baptist Church in Benton County, said he was shocked to learn about his congregation's brush with covid-19.

"I didn't know anything about it till it came up on the news," he said. "You'd think that they'd want me to be aware. You'd have thought they'd let you know."

"We have the hand sanitizer and the masks and such. We've been trying to use common sense practices," he said.

The identity of the covid-19 survivor is a mystery, he said.

"I know pretty well everybody that comes in and out the doors here. I kind of make it my business to do that. And I know of nobody that's been tested positive or had any symptoms step into this church since it started," he said.

Pastor Mark Bryant of First Assembly of God in Green Forest knows which of his parishioners is a covid-19 survivor.

"She was quarantined, never had a symptom, never was sick. She got out of quarantine and the Health Department cleared her," he said.

The visit occurred May 17. No additional cases resulted, he said.

The case might have gone undetected. But the woman was scheduled for a routine medical appointment; patients were required to get tested before seeing the doctor.

"She had no symptoms at all and it was a total shock to her when she tested positive," Bryant said.

With the church posing no health risks, Friday's government announcement came as a surprise, he suggested.

"We were blindsided. I did not appreciate our name being on that list and me not knowing it. The Health Department in the state of Arkansas or Carroll County never ever contacted our church," he said. "We never got a call or a letter or a visit from any state agency at all."

Sunday services are safe and the congregation is health-conscious, he said.

"We have every other pew taped off. They're still taped off. We have a large sanctuary. It's not hard for people to distance themselves at all. We have sanitizer at every entrance. Our ushers wear gloves. They do not pass the offering bag. They go to each individual and then hold the bag themselves. People wear masks," he said.

Worshippers can attend with confidence, though the welcome may not be quite as friendly as it used to be.

"During a normal service, we would greet one another with handshakes and hugs and whatever. We have completely stopped doing that since back in March," he said. "We're doing everything we possibly, humanly, can to make it a safe environment."

At Monday's coronavirus briefing, Health Secretary Nate Smith was asked about the state's handling of the churches.

"When I talked about churches on Friday, I didn't mention any specifics. I did show a map but no names were put on that map," he said.

His office subsequently received a request for the names of the churches, he said.

"My intention would be that we would only highlight venues where we had a significant number of cases but the request from the media was really for the entire list," he said. "I was informed by my legal counsel that that was subject to the Freedom of Information Act so we went ahead and gave the list with an explanation."

The list shows churches that were visited by covid-19 victims.

"It doesn't mean that there was transmission occurring there," he said.

At the briefing, Arkansas Gov. Asa Hutchinson praised the efforts most houses of worship have made.

"In regard to the churches, they're doing a great job and they're really working hard to protect their parishioners," he said.

Of the 43 churches, roughly three dozen have had minor brushes with the coronavirus -- one or two visitors who were positive at the time.

First Pentecostal Church in North Little Rock, on the other hand, has seen 34 cases of the virus since the pandemic took hold in the state in March. Around a third of those have already recovered from the virus, said a church spokesman, Zach Ward.

As a precaution, the church held its two Sunday services online this week, and will do the same for its midweek service.

It's a big church with a lot of members. There's enough seating for 2,875 people, Ward said.

"Just because a member of our church has covid-19 does not mean that being a member of the church caused them to get covid-19.

"They could have picked it up off a gas pump, or at a grocery store," he said.

Early in the public health emergency, the church held its services online.

Since May, services have been held at the church, but attendance is limited to facilitate social distancing. A separate area is devoted to those who consider themselves high-risk for contracting the virus.

Another house of worship with multiple cases is St. Raphael Catholic Church in Springdale.

The parish has 24,500 members. Most of its Sunday masses are in Spanish and many of its members work in poultry processing plants, a heavily-hit sector.

"They caught this elsewhere," he said. "It did not start here and we're not the reason for the spread."