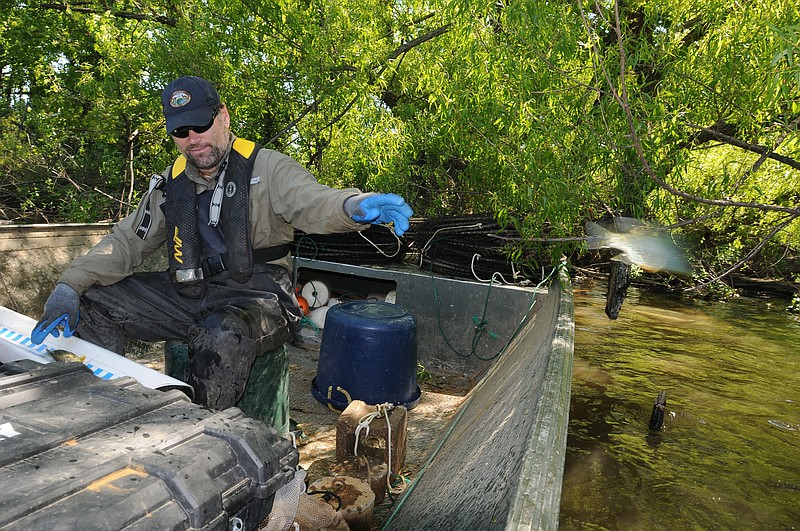 NWA Democrat-Gazette/FLIP PUTTHOFF Jon Stein, fisheries biologist, tosses a redear back into Lake Elmdale May 12, 2016 after measuring it.

There was a tie for eighth place between Rodger Taylor and Jesse Cruz with 10.72 pounds each. Bryan Rogers placed 10th with 10.6 pounds.

The field was limited to 25 boats by the Army Corps of Engineers because of virus guidelines. All Castmaster teams will be allowed to fish the next tournament July 11, said Johnny Brewer, tournament director.

A study by the Arkansas Game and Fish Commission shows Lake Elmdale near Elm Springs is a top destination to catch channel catfish.

The average catfish size was 17 inches long and 2.25 pounds. The upstream end of the lake yielded the most catfish from water 8 feet deep.

All sampled fish were released back into the lake.

At its June monthly meeting, the Arkansas Game and Fish Commission panel of commissioners voted to allow a spur of the Razorback Greenway to go through a new Game and Fish nature center being built in Springdale.

Commissioners voted to let Game and Fish Director Pat Fitts enter into an agreement with the city of Springdale to allow the spur to be built through nature center property.

NWA Outdoors listings are for any news or upcoming events in or about the outdoors recreation except competitive ball sports. Send submissions to [email protected] nwadg.com .