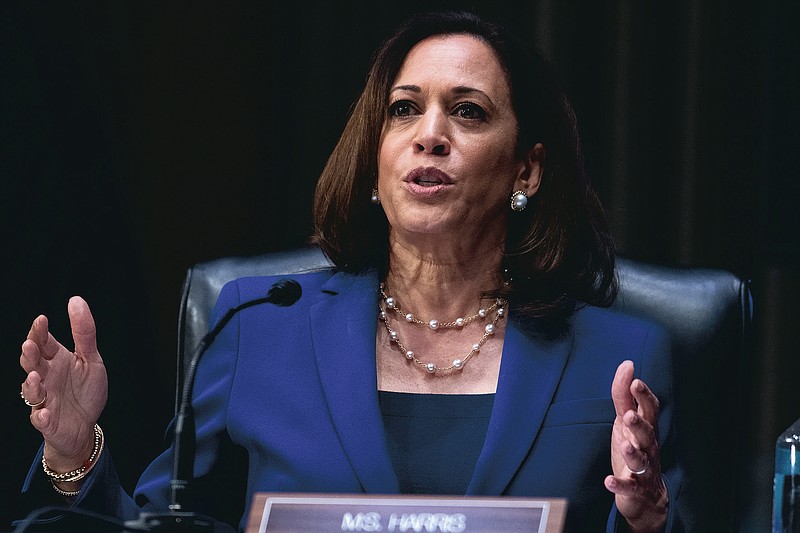 In this June 16, 2020, photo, Sen. Kamala Harris, D-Calif., asks a question during a Senate Judiciary Committee hearing on police use of force and community relations on on Capitol Hill in Washington. Seven months after ending her presidential bid, Harris is at another crossroads moment in her political career. (Tom Williams/CQ Roll Call/Pool via AP)

SACRAMENTO, Calif. — When pressed to take a position on tough issues during the Democratic presidential primary, Kamala Harris often replied with a variation of “we need to have that conversation.”

But as the U.S. is roiled by police killings of Black men and women, the California senator is done hedging.

As one of two Black Democrats in the Senate, Harris took a lead role this week in blocking Republican-backed legislation to overhaul policing. In an interview with The Associated Press, Harris said she wouldn’t be “played” by GOP leaders seeking to move the bill without input from Democrats and called on Americans to do more to acknowledge racial injustice in policing.

“There is a problem that we need to solve,” she said. “And the problem is that we have American lives that have ended at the hands of excessive force and police brutality.”

Seven months after ending her presidential bid, Harris is at another crossroads moment in her political career. She’s a leading contender to become presumptive Democratic nominee Joe Biden’s running mate at a time when many Americans are reflecting on the country’s legacy of systemic racism.

If she’s selected, Harris will likely face scrutiny over her tenure as San Francisco’s district attorney and, later, as California’s attorney general. Some progressives argue that work supported a system that perpetuates injustice against Black people.

But Harris’ backers say she’s approaching the moment with a clarity that could help ease those concerns.

“Sen. Harris has just been able to truly get an intimate vantage point of the criminal justice system since the beginning of her career,” said Deidre DeJear, Harris’ former Iowa campaign chair and Iowa’s first Black nominee of a major party for statewide office. “When you have that type of value, you definitely want to embrace it.”

He’s expected to announce his choice around Aug. 1.

A Harris pick would likely revive questions about her political skills. During the primary, she struggled to land on a message and ultimately left the race in December — nearly two months before voting began.

Brian Brokaw, who managed her 2010 campaign for attorney general, said it’s easier for Harris to be herself outside the scrutiny of a presidential campaign. Today’s conversations around systemic racism and policing capture Harris’ “life’s work” in a way the primary did not, he said.

Harris co-sponsored the Justice in Policing Act this month that would ban police from using chokeholds and no-knock warrants, set a national use-of-force standard and create a national police misconduct registry, among other things. It would also reform the qualified immunity system that shields officers from liability.

The list includes practices Harris did not vocally fight to reform while leading California’s Department of Justice. Although she required DOJ officers to wear body cameras, she did not support legislation mandating it statewide. And while she now wants independent investigations of police shootings, she didn’t support a 2015 California bill that would have required her office to take on such cases. 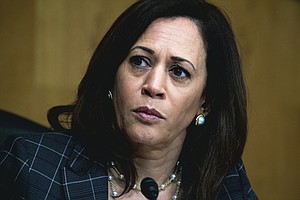 In this June 25, 2020, photo, Sen. Kamala Harris, D-Calif., attends a Senate Homeland Security and Governmental Affairs Committee hearing on Capitol Hill in Washington. Seven months after ending her presidential bid, Harris is at another crossroads moment in her political career. (Tom Williams/Pool via AP)

“We made progress, but clearly we are not at the place yet as a country where we need to be and California is no exception,” she said. But the national focus on racial injustice now shows “there’s no reason that we have to continue to wait.”

She’s been a staple in recent weeks on cable news programs as well as in online conversations with prominent Black activists.

She’s twice joined conversations with the Rev. Ben McBride of Oakland, whom she appointed in 2016 to a new state board overseeing the collection of racial data on police stops. He said that while Harris doesn’t have a “perfect record,” she’s tried innovative approaches to reform.

“We need people who are going to be in these offices that will be true champions for the causes of the oppressed,” McBride said of Harris’ vice presidential prospects. “We’ve seen her do that in times past. We’ve seen her miss opportunities to do that.”

McBride said he’s happy to see Harris aligning herself with young protesters — she’s joined protests in Washington and has regularly praised the Black Lives Matter movement. And he acknowledged the unique challenges she faced as a Black woman in her presidential run.

“I have no doubt the impact of the loss of Black life is something she feels very, very deeply,” he said. “She’s out there speaking her heart and her mind maybe without the restraints of having to play some of the political game.”

Zach Norris, executive director of the Ella Baker Center for Human Rights, said it would be a risk for Biden to choose anyone with a law enforcement background if he wants to motivate young, progressive voters of color. Those voters, Norris said, are looking for a nominee with a record of pushing for “transformative” change, and while race and gender are important in Biden’s selection, they are not essential.

He suggested Massachusetts Sen. Elizabeth Warren, who is white, would be a better vice presidential nominee.

“I think the way we have thought about criminal justice reform has been too narrow, and that (Harris) has at times positively invoked the same kind of ethos that has led to mass incarceration as a prosecutor,” he said.

But DeJear, Harris’ Iowa campaign chairwoman, said the vice presidency could provide an opportunity for Harris to drill down on reforming the criminal justice system. She said the country is now getting a full view of who Harris is in a way they didn’t during the primary.

“We are so quick as a country to get to a punch line rather than watch things play out,” DeJear said. “She’s showing America who she is, and she was always going to do that. It was just a matter of when America was ready to listen.”

Print Headline: ‘A problem that we need to solve’