GAME ON: 'The Last of Us' sequel leaves a lot to be desired 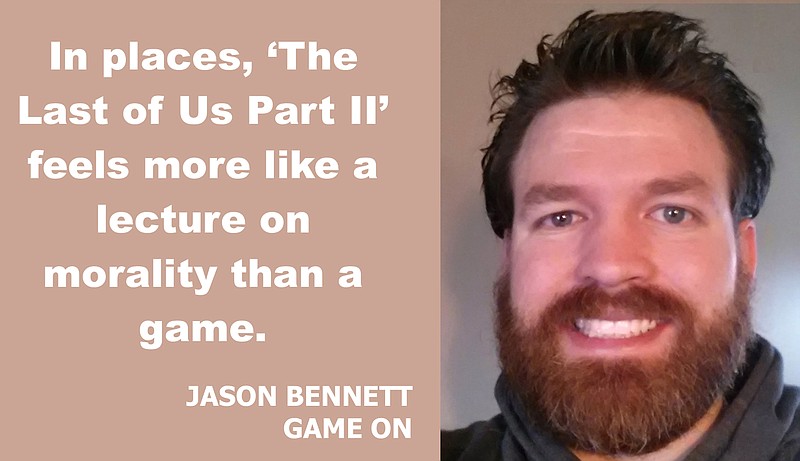 My most anticipated sequel for years, "The Last of Us Part II" is a case study in what happens when a studio says, "Well, what if we made a video game that purposefully makes players miserable?"

I wanted to love this game. There's no console game that I've sunk more hours into than 2013's "The Last of Us," although many of those hours were on its stellar multiplayer. The narrative-heavy "Last of Us" was driven by its compelling characters, and it was a story that players wanted to see play out.

In "Last of Us," players controlled Joel, a grizzled smuggler escorting 14-year-old Ellie across a post-apocalyptic United States. Humanity had pretty much collapsed after the outbreak of a fungus that turned people into zombie-like creatures, and Ellie, who was immune, was mankind's hope for a cure. Throughout the long journey, Joel finally started to recover from the loss of his daughter decades before, and he and Ellie formed an unshakable bond.

In the game's final moments, when Joel learned that the doctors were going to remove Ellie's brain, he stormed the operating room to rescue her, choosing her life over the rest of humanity.

"The Last of Us Part II" is set five years later. It's a bit difficult to review this game without giving away some of the plot, since the game is mostly narrative and the defining narrative event occurs within the first hour of gameplay. But because Naughty Dog released extremely misleading trailers for the game, I feel it's actually kind of important to spoil that event because otherwise, players might buy this game on false premises. So, spoilers ahead.

Naughty Dog's trailers show Joel alive and well, preparing to go with Ellie on an unspecified quest for revenge. But in reality, the lines that convey that impression are said by someone else in the game. Joel is brutally and rather unceremoniously killed off right at the start, and the game sees you playing both protagonist and antagonist — as Ellie, and as Joel's killer, Abby, in equal parts throughout the about 24 hours it takes to finish the game.

Adding to the noise surrounding this game is that much of the plot, and gameplay footage, was leaked online before its release. Fans eager to see the next chapter in Joel and Ellie's story (and again, this is the game that Naughty Dog was "selling" with its misleading trailers) felt they'd had a rug pulled out from under them.

Critiquing "Part II" is kind of like critiquing a movie because that's mostly what it is. The gameplay is linear. There are no alternate endings or routes. The player has no agency in which events transpire, who lives or dies — none of it. In places, it feels more like a lecture on morality than a game.

The actual gameplay — navigating puzzles, killing deadly zombies, fighting wave after wave of human enemies — is almost filler to slog through. And in the 24 hours of gameplay, director Neil Druckmann does his best to yank heartstrings — mostly by having brutal events occur and then using flashbacks to try to make players feel bad about their actions (which, of course, they had no control over because it's a game on rails).

The game and narrative aren't boring. The main characters are quite fleshed out, and you might find yourself questioning just who you should be rooting for by the end. However, parts of it are deeply unsettling. The violence is so ever-present and gratuitous it's almost pornographic. Druckmann even said in an interview that he wanted players to be "repulsed by some of the violence they are committing."

Unfortunately, this isn't the game many fans wanted. Some critics, however, seem to love it, rating it a 94/100 on Metacritic, the average of about 100 reviews from professional reviewers. The masses, the hoi polloi, the smallfolk, if you will, had a different opinion, and the Metacritic average score from 81,000 regular players stands in stark contrast, at a mere 4.5 out of 10.

So which is right? From a technical standpoint, there's much to praise in "The Last of Us Part II." The graphics are gorgeous. The game is massive, requiring 100 gigabytes of free space to download. Clearly, a ton of work went into this game. (Enough that there were serious complaints of poor employment conditions at Naughty Dog for the long hours it required of workers.)

The voice acting is emotional and on point, music and sound are superb, and the combat is smooth and fairly intuitive. There are a few changes in crafting, skills to learn and some new moves, like going prone and dodging enemy melee attacks. There even are some really stunning rope physics, used for makeshift climbing solutions, that are coding masterpieces.

All this seems like an improvement over the original, although the artificial intelligence controlling both human enemies and human companions still seems quite lacking.

However, trailers showed what seemed to be actual combat gameplay with enemies that stalked Ellie relentlessly and intelligently, and it now seems that those were scripted scenarios rather than a clever AI. Again, misleading.

Also, there is no multiplayer with "Part II" — a huge disappointment.

Naughty Dog says it's working on a multiplayer experience, but whether that will be downloadable content or a standalone game remains to be seen. There will be people who love "The Last of Us Part II" and people who hate it, but what I can say is that it doesn't seem to be the kind of game many will need (or want) to play a second time.