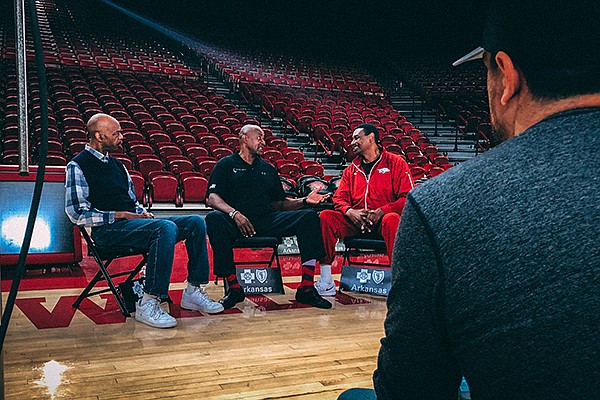 From left to right, former Arkansas basketball players Ron Brewer, Sidney Moncrief and Marvin Delph speak while filmmaker Christopher Hunt, foreground, watches on Wednesday, Feb. 28, 2018, at Bud Walton Arena in Fayetteville. The "Triplets," as the trio is known, were interviewed for a documentary film about their former coach, Eddie Sutton. - Photo by 1577 Productions

FAYETTEVILLE -- In 2017, the producers of EDDIE -- a documentary film on the life and career of Eddie Sutton -- sent an email to ESPN to see whether the sports network might want to air it once the project was completed.

"ESPN wasn't interested," said Christopher Hunt, the film's director and one of its producers. "They said it didn't move the needle internally for them."

EDDIE will make its debut at 8 p.m. Monday on ESPN.

"Once ESPN saw the film, they changed their minds," said Wendy Garrett, a producer along with Hunt, David Tester and Takashi Entertainment. "I think they realized we had something really special."

The film was completed last winter, but it has been updated since Sutton's election to the Naismith Memorial Basketball Hall of Fame on April 3 and his death at age 84 on May 23.

"That's kind of the way documentaries go sometimes," Hunt said. "You think the story is over, and it just keeps on going."

The 93-minute film includes plenty of background on Sutton's college basketball coaching career, including his 11-year run at the University of Arkansas from 1974-85 when the Razorbacks were 260-75 and made nine NCAA Tournament appearances, highlighted by the 1978 Final Four.

Sutton's struggles with alcoholism also are part of the film, notably the impact it had on his son, Sean, who played for his father at Kentucky and Oklahoma State, then was his longtime Cowboys assistant coach and succeeded him as head coach.

"Sean's relationship with our dad is a big part of the story," said Oklahoma State assistant coach Scott Sutton, who at 50 is a year younger than his brother. "It was so emotional and raw.

"I thought Sean was terrific. He was brave, and he was honest. I really think he made the movie."

Sean Sutton, now on the staff at Texas Tech as an adviser to Coach Chris Beard, spoke openly in the film about his father's verbal abuse when he was drinking.

"My dad was a great, great person, and I loved him very much," Sean Sutton said. "But he also had his demons, and when he was fighting those demons, he said some pretty unpleasant things to me.

"I don't hold any grudges, because having watched him go through the disease of alcoholism, I understand that a lot of things were the result of him drinking. He was always very apologetic, and I know it really wasn't him in some of those conversations. It was more the alcohol talking. But it wasn't always easy to hear what he said, I can tell you that."

Hunt, who is from Midwest City, Okla., and attended Oklahoma State, said he appreciated Sean Sutton's candor and the family's willingness to have Eddie Sutton's story told from all angles.

"Whenever we first met with the Sutton family, we tried to convey to them that for this film to be the best it possibly could be, we couldn't just do what I would call a propaganda piece," Hunt said. "They totally understood that, and to their credit, they decided the timing was right and it was something they wanted to do."

The film includes rare photos and film of Eddie Sutton early in life -- including his playing days at Oklahoma State -- that were collected and saved by Patsy Sutton, Eddie's wife who died in 2013.

"Patsy was an excellent record keeper," Garrett said. "Thank goodness she was so well-organized."

Eddie Sutton went through rehabilitation for alcoholism in 1989 after he resigned under pressure at Kentucky in the midst of a recruiting scandal, though he wasn't named by the NCAA in any of its allegations.

"One thing about my dad, he was a survivor," Sean Sutton said. "He never blamed anybody else. He always took ownership of the bad choices he made. I know he wished he could have taken some of those back, but that's life sometimes."

"I was really concerned that might send him over the edge and he'd start drinking again," Sean Sutton said. "But he was unbelievable during that stretch. He didn't really start having problems again until the very end."

Sutton had a relapse with alcoholism in 2006 when he was involved in a car wreck that resulted in charges of driving under the influence. He took a leave of absence and resigned after the season.

"To this day, I'm not sure why he decided to start drinking two or three days before that accident," Sean Sutton said. "I was shocked, because I just wasn't expecting it.

"It's too bad that's the way it all had to go at the end. But he regrouped from that."

Sutton served as interim coach at the University of San Francisco during the 2007-08 season, where he went 6-13 to finish with a career record of 806-326.

"Hopefully, this film will educate people and raise awareness about addiction," Scott Sutton said. "Maybe it also can help certain people who are struggling right now."

President Bill Clinton, who as a law professor at Arkansas became friends with Sutton, was interviewed for the film. Dallas Cowboys owner Jerry Jones, who played football at Arkansas, also was among those interviewed, as were Sidney Moncrief, Ron Brewer and Marvin Delph -- the "Triplets" who starred for the 1978 Razorbacks.

"I like the fact they're showing the human side of Coach Sutton," Moncrief said. "We're all flawed, and sometimes we say and do things that are not within the norm of who we are. This film will show the total person."

Hunt said that in April 2016, he woke up in the middle of the night with the idea of making a film about Sutton.

"I couldn't go back to sleep," Hunt said. "I sat on it for a couple of days before I told anybody else, because often you can get these ideas at night that seem really good, and then you wake up, and you're like, 'Wow, that's really stupid.'

"But this idea just kept sounding really good to me. I felt like I was uniquely qualified to tell that story. I wanted to make the film to help cement Eddie Sutton's legacy and introduce him to a new audience as well."

More than four years after Hunt couldn't get back to sleep, EDDIE will make its debut.

"I think it speaks to the perseverance of our team," Hunt said. "It also says a lot about the Sutton family and their willingness to assist us with the project and keep going forward.

"If you have a dream to do something, you should go chase it."