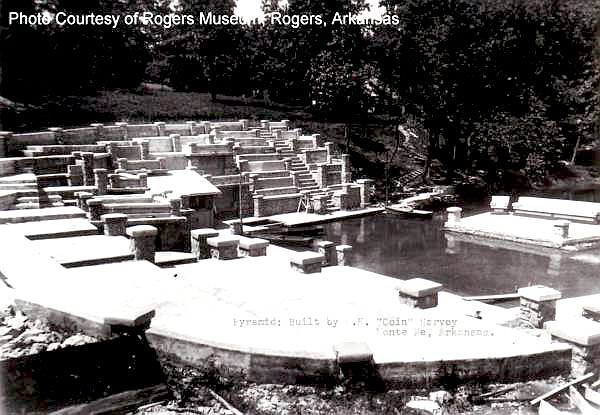 Photo no. 2 caption: The Amphitheater under construction about 1926. This entire 1000 seat amphitheater was covered over with circus tents for the presidential convention of 1931. (Photo courtesy of the Rogers Historical Museum)

Coin Harvey began building his resort at Monte Ne in 1900, and the biggest obstacle from the beginning was transportation for the tourists. The roads to Monte Ne were just wagon trails and virtually impassable in the winter. To solve the problem, Harvey decided to build a railway to Monte Ne and made a deal with the Frisco Railroad.

In order for the tourists to arrive in style, the Monte Ne Railway Company built a large log depot at the resort on the bank of the lake near Big Spring. It had two floors and two large open-air wings that served as outdoor waiting rooms. It is interesting to note that the first floor of the depot contained two waiting rooms, one for whites and one for African-Americans, as that was the law. (The description of the depot did not include any restrooms.) The Monte Ne Railway had only an engine and one car and limped along for several years with erratic service from the resort to Lowell. It was staffed entirely by Coin's son, Tom Harvey, and his friend, Tony LeBlanc. In the early days, from 1902-1909, most of the guests were brought to Monte Ne on special Frisco excursion trains.

The Monte Ne Railway Company went broke and was revived several times, but it was finally sold to the Arkansas, Oklahoma & Western Railroad (AO&W) on Dec. 3, 1909. Warren Felker of Rogers owned the AO&W, and he intended to use the Monte Ne Railway as a link to build a railroad from Eureka Springs to Siloam Springs and westward. However, the company had financial difficulties and went bankrupt about 1910.

The Kansas City & Memphis Railroad (KC&M), also owned by Warren Felker, bought the defunct AO&W in 1911. The KC&M owned a line from Rogers to Cave Springs and planned to expand east through Monte Ne and across the Ozarks toward Memphis, Tenn. Lack of business caused the passenger service to Monte Ne to be discontinued in 1914, but that was not the end of the story. The line continued to be used for logs and freight.

In 1912, the Ozark Land and Lumber Company, owned by Roscoe Hobbs of Rogers, had 12,500 acres of timber east of Monte Ne and across the White River. (This land is now Hobbs State Park.) The company wanted to bring the logs out by rail, but there was a big problem -- the timber lay on the east side of the White River. To harvest the oak logs, the company built a huge steel bridge with a 600-foot long trestle across the White River and extended the line from Monte Ne to Piney. The company built the line and bridge and leased them to the KC&M railroad. The Monte Ne bridge was the longest railroad span in Benton County.

David Kennan, the recent owner of Rogers Transfer and Storage, related the following story about the bridge: The railroad used the bridge to bring loads of logs across the river into Monte Ne, but a few years after the bridge was built, it became unstable. The engineers on the train did not trust the bridge, so they would stop before crossing, and one man walked to the other side. Then the engineer put the train in gear and hopped off the engine, letting the train and load of logs cross the bridge passengerless. On the other side, the man waiting would hop onto the moving train and stop it, and wait for his fellow workers to walk across the bridge, rejoin the train, and continue the trip into Monte Ne. (Interview with David Kennan by James Hales on June 13, 2008.)

By the late 1920s, Coin Harvey's fabulous resort town had failed with the final death blow being dealt by the Great Depression of 1929. Having become disillusioned and disgusted and feeling that the end of civilization was near, he had attempted to build a great pyramid in 1928 that was to be a time capsule to preserve the history of civilization for future generations. This attempt also failed when he ran out of money. He did build an amazing 1,000-seat amphitheater around Big Spring that was going to be the foyer to his great pyramid.

The presidential election of 1932 was coming up, and Harvey turned his attention to a political crusade to save the country. He decided to host a presidential convention at Monte Ne to select nominees for president and vice president of his Liberty Party. Harvey expected 10,000 delegates from all of the 48 states. At the time, the entire population of Rogers was only 3,500. In anticipation of the huge influx of visitors, the railroads offered special excursion rates, and the winding country road from Rogers was put in good condition. The telephone company put in extra facilities for the press, and concessions were set up to provide food and drink for the visitors. All of the space in the hotels in Monte Ne was reserved, and additional tents and cots were set up for the delegates. Harvey put out a plea to all of the citizens of Rogers to take in boarders for the event. In anticipation of bad weather, Harvey had the entire amphitheater covered with a huge lighted circus tent. To make room inside for the vast anticipated crowd, the water surrounding the stage was floored over and lined with rows of chairs. Loudspeakers were set up so the anticipated overflow crowd outside could hear the proceedings.

When the big day came for the convention, only 786 delegates showed up. The crowd and delegates were made of a sprinkling of Reformers, Socialists, Populists and disgruntled Democrats and Republicans. To qualify as a delegate, an applicant had to sign a card stating that he had read Harvey's publication, The Book, and felt that he was fully informed as to the effect of a financial system based on usury. All "signers" were admitted as delegates with the oldest being 93 and the youngest, Mary Ellen Hughes, only 7 years old.

The nomination and voting was said to have been done under the wildest confusion with jeers, catcalls, cries of steam roller tactics and similar remarks. There was so much wrangling over the presidential candidate that the 82-year-old Harvey was the only candidate that the delegates would vote for -- so he had to take it by acclamation.

On election day, Nov. 2, 1932, Coin Harvey said, "I don't expect to win, but I do expect to advance my party to the position that in case the race between Gov. Roosevelt and President Hoover is close, my party will have the controlling votes of the Electoral College. I'll run third."

When the votes were all counted, Franklin D. Roosevelt won the presidential election of 1932. William Hope Harvey came in sixth out of the six candidates who ran. He had only 53,425 votes with only 1,049 votes in the state of Arkansas and only two votes in Rogers. It was assumed that these two votes came from Coin and his wife. 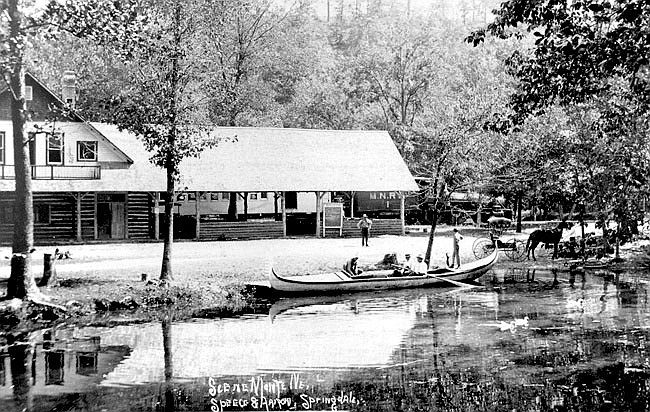 Photo no. 1 caption: The Monte Ne RR Depot with the engine and passenger car in the back. The gondola is picking up passengers from the train to be floated to their hotel across the lake. (Photo courtesy of the Rogers Historical Museum)