WATCH YOUR LANGUAGE! Bread has many uses besides sustenance 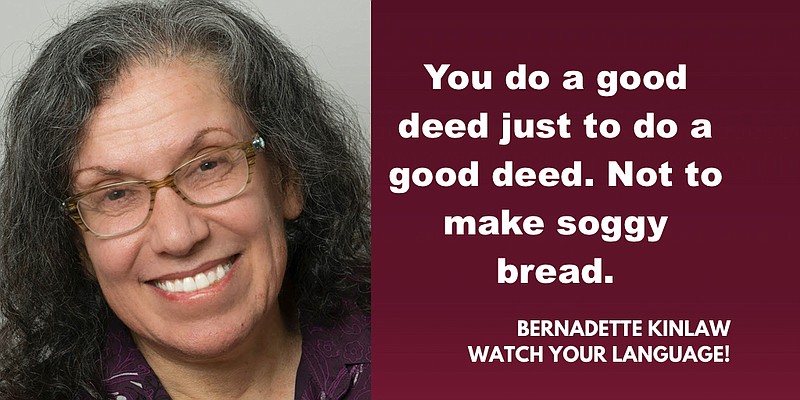 This week, the need for me to talk about bread arises. My quest this week didn't come about because everyone is baking sourdough bread these days. It came from learning the origin of the word "companion."

The word came from the Latin words "com," meaning with, and "panis," meaning bread or food. So, the person you're having a meal with is your companion. Of course, companion has come to mean a person who keeps company or travels with you. I will confirm that I spend time eating with nearly all my companions.

(A nonbread aside: Merriam-Webster also reports that "symposium" comes from the Greek root meaning to drink together. Again, I have indeed found myself drinking the one or two times I have attended a journalism symposium, a gathering to cover media topics.)

The phrase "break bread" came to mind when I learned about companion. This comes from the Bible. Jesus broke bread with his disciples. Now, I thought that must have been pretty hard bread. It was. Bread was hard in those times.

The Gospel of Matthew says:

While they were eating, Jesus took bread, spoke a blessing and broke it, and gave it to the disciples, saying, "Take and eat; this is my body."

The phrase "to break bread" has taken on a deeper meaning than simply eating. It represents a kinship, or at times it's a chance to resolve differences.

Do you "butter your bread on both sides"? That sounds extremely messy.

Beyond the excessive unwieldiness, the phrase means you're making money from two different sources, and those sources might be contradictory.

I couldn't think of a good example of this, but I found one in the Free Dictionary:

The CEO buttered her bread on both sides, secretly investing in oil companies while publicly backing green energy initiatives to gain popular support.

Can any of you think of a good example? Let me know.

"Bread and butter" is an idiom meaning the basic way you make a living. I see a pattern here. People must love butter.

A person aspiring to write the Great American Novel might make his bread and butter with a day job at an ad agency.

Another "bread and butter" is a superstitious thing. My mother and I would say this phrase when we were walking down the street holding hands and a pole or other object got in the way of our clasped hands. If you don't say "bread and butter" before you let go, you'll have bad luck.

I found it hilarious that I was able to find what year sliced bread was invented. Otto Rohwedder of Davenport, Iowa, invented the bread-slicing machine in 1928.

I found it more hilarious how excited the person writing about this invention seemed. A July 6, 1928, article of the Chillicothe [Missouri] Constitution-Tribune wrote that the typical housewife could expect "a thrill of pleasure when she first sees a loaf of this bread with each slice the exact counterpart of its fellows. So neat and precise are the slices, and so definitely better than anyone could possibly slice by hand with a bread knife that one realizes instantly that here is a refinement that will receive a hearty and permanent welcome."

I knew "bread" was slang for money. I doubt I have ever used it that way, and I haven't heard anyone use that word that way in quite a while.

I just learned that "heavy bread" means a lot of money.

I thought "casting bread upon the waters" was to feed the ducks and other birds out there. It's another phrase from the Bible. From Ecclesiastes:

Cast your bread upon the waters, for you will find it after many days.

It means you do something without expecting a reward. You do a good deed just to do a good deed. It doesn't matter that you make soggy bread.

"Bread and circuses" is a phrase describing things that people in power use to distract people from worrying about real problems.

And this last bread phrase was new to me. "A little bit of bread and no cheese" is how the people in Britain describe the song of the Yellowhammer bird. It might be used only by the birds with a British accent. See whether you agree. Listen here:

A reader asked me to differentiate between two words: "flaunt" and "flout." To flaunt is to put on a showy display.

As Europe slowly emerges from the coronavirus pandemic that has killed well over 150,000 in the continent and crippled some of the world's biggest economies, Monday let a brilliant ray shine through the gloom as several of the top museums globally reopened to flaunt their riches.

To flout is to show contempt for something, such as laws or rules. Also from The Post:

Huawei is the biggest global supplier of network gear for phone and internet companies and some analysts say Chinese companies have flouted international rules and norms amid allegations of technology theft.