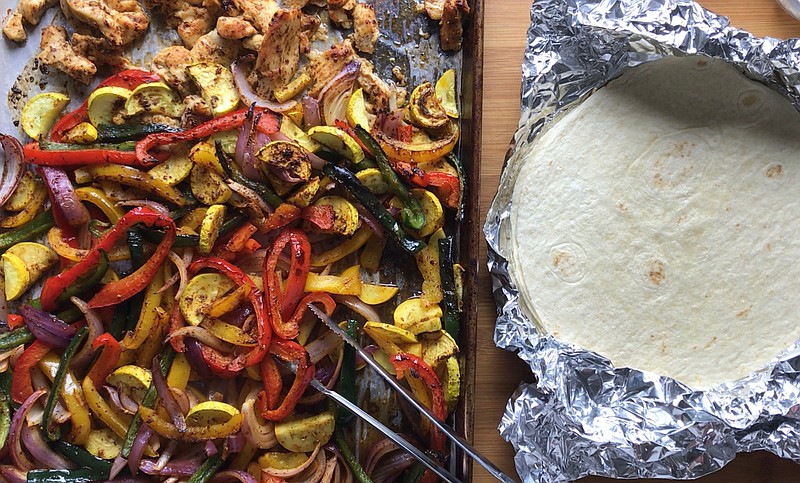 This cheater version of fajitas is almost as good as the real thing. But so much easier to prepare.

Toss the seasoned meat and vegetables on a rimmed sheet pan, pop it under the broiler while you heat your tortillas and voila! You've got fajitas on the table in almost a flash.

Before you argue, "But fajita are grilled, not baked,'' let me remind you, a broiler is essentially an upside-down grill and thanks to a bit of smoked paprika, these fajitas have a whisper of smoke flavor.

I love the versatility of this recipe. It works equally well with beef or chicken. I haven't tried it with shrimp, but I imagine it would work if you gave the vegetables a head start and then added the shrimp in the last three to five minutes. And of course, for a vegetarian version, skip the beef or chicken and double up on the vegetables or replace the meat with portobello mushrooms.

1 or 2 yellow squash or zucchini, halved lengthwise, seeded and sliced

Heat broiler to high. Have ready a large, rimmed baking sheet. If desired line the baking sheet with parchment paper or foil.

In a medium bowl, toss the sliced chicken or beef with about 1 tablespoon of the vegetable oil, the garlic and half of the spice mixture. Mix well to coat.

Place chicken or beef on one side of the baking sheet arranging it in as close to an even layer as possible.

In a separate bowl, combine the peppers, onion, squash, the remaining 2 tablespoons of vegetable oil and the remaining spice mixture. Mix well to coat. Scatter the pepper-squash mixture on the empty side of the baking sheet, arranging the vegetables in as close to an even layer as possible.

Broil 10 minutes, stirring halfway through, or until chicken is cooked through or beef is browned and vegetables are tender.

Squeeze the lime wedges over all.