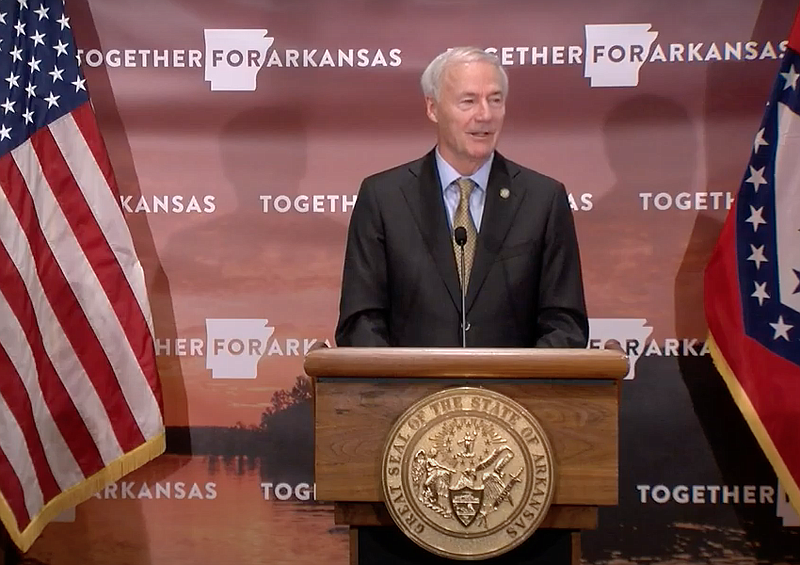 Arkansas recorded an increase of 791 cases of covid-19 on Thursday, and Gov. Asa Hutchinson announced he would deploy an additional 14 National Guard troops to assist the Department of Health’s coronavirus operations.

The decision to send guardsmen to help in the fight against the virus follows earlier deployments in Northwest and Central Arkansas, which currently involve 28 troops.

On Thursday, new cases of covid-19 brought the total number of Arkansans who have tested positive for the virus to 41,759, according to data provided by a state website.

Of those, 6,580 are considered active cases, according to Arkansas’ Interim Secretary of Health, Dr. Jose Romero.

Hospitalizations from the virus fell by four on Thursday, to 504. Meanwhile, the state recorded eight additional deaths over the previous 24 hours, bringing the total to 442.

Romero announced that the Health Department would no longer require that patients scheduled for elective surgeries be tested for the virus beforehand, saying that those tests had overwhelmingly come back negative. Hutchinson added that testing those patients had clogged the state’s limited capacity for testing.

More than 180,000 coronavirus tests from Arkansas were processed in July, short of the governor’s stated goal of conducting 200,000 tests for the month, which ends Friday. The governor also encouraged Arkansans to take antigen tests at their local pharmacies.

Antigen tests are less reliable than other tests tracked by the state, Hutchinson said. But people who receive a positive result on an antigen test are referred to take additional tests that are then recorded in the state’s totals.

The total number of coronavirus cases reported in Arkansas remained at 40,968 Thursday morning, according to a state website. The death toll remained at 434.

[Video not showing up above? Click here to view » https://www.youtube.com/watch?v=IdTMXDybMD8]