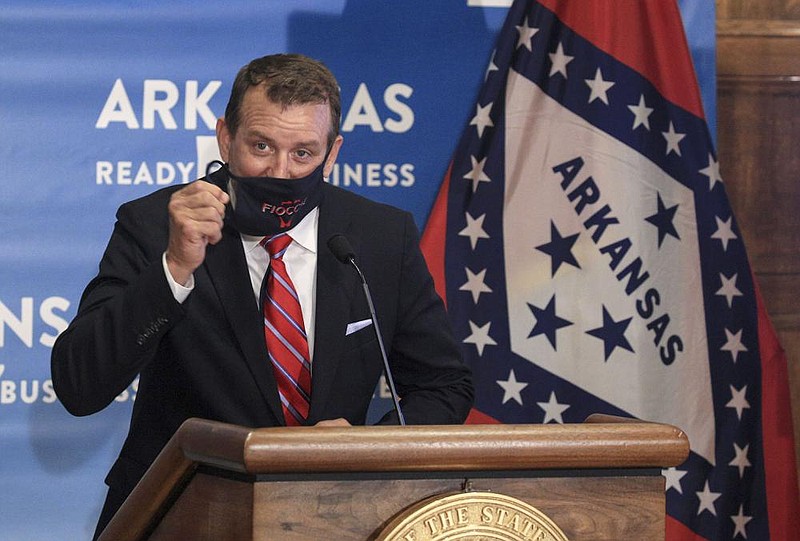 Anthony Acitelle, CEO of Fiocchi America, takes off his mask Wednesday before speaking during a news conference at the Capitol where the governor announced Fiocchi’s plans to add jobs at its Little Rock facility. (Arkansas Democrat-Gazette/Staton Breidenthal)

The U.S. subsidiary of the Fiocchi Group, an Italian ammunition manufacturer, will invest $15 million and initially add 57 jobs to a Little Rock ammunition parts-maker it acquired.

Fiocchi of America of Ozark, Mo., acquired Blackstone Ammunition from Danville-based Grandeur Fasteners, which has a facility at 2200 145th St. in Little Rock, said Jay Chesshir, president and chief executive officer of the Little Rock Regional Chamber of Commerce.

Grandeur will continue to own the Little Rock property and lease it to Fiocchi, he said.

The Fiocchi investment will provide a state-of-the-art facility for 85 skilled workers who will produce world-class ammunition, Hutchinson said.

[Video not showing up above? Click here to watch » https://www.youtube.com/watch?v=Y32kIqC6dwg]

"These are good-paying jobs that will make a difference in our community and most importantly, I hope this is a partnership that will lead to future growth down the road," he said.

Fiocchi will retain the 28 employees who worked for Blackstone.

"The governor and I did talk, and he asked me, 'Why Arkansas?' and I said we actually picked you and we picked you because of the business environment, the acceptance of the firearms industry and, really, the people," said Anthony Acitelli, Fiocchi of America president and chief executive officer. "We can buy the machines, but we can't buy the people. We really need the skilled workforce, and we're really acquiring you, not the machines."

The facility will produce mainly centerfire ammunition designed for larger-caliber pistols and rifles. A centerfire cartridge has a primer in the center of the cartridge case head. It requires a more complex and expensive manufacturing process than rimfire cartridges, which are inexpensive to produce but typically limited to smaller-caliber firearms.

Demand for ammunition necessitated the U.S expansion of the 144-year-old company founded and still based in Lecco, Italy, Acitelli said. Fiocchi manufactures more than 300 million rounds per year at its facility in Ozark, Mo., which employs about 100 people, according to the company's website.

The United States' share of Fiocchi's global market is "50 percent and growing," he said.

The company is eligible for an Arkansas Economic Development Commission incentive package worth a total of $661,593, according to Alisha Curtis, spokeswoman for the Arkansas Department of Commerce.

The incentives include a total of $579,186 under the discretionary Create Rebate program, which are annual cash payments for up to 10 years and targeted at businesses that create new full-time jobs with minimum annual payrolls of $2 million. The minimum payroll must be met within two years of the effective date of the incentive agreement.

The other incentive in the package totals $82,407 under the Tax Back program, which provides sales and use tax refunds on the purchase of building materials, and taxable machinery and equipment.