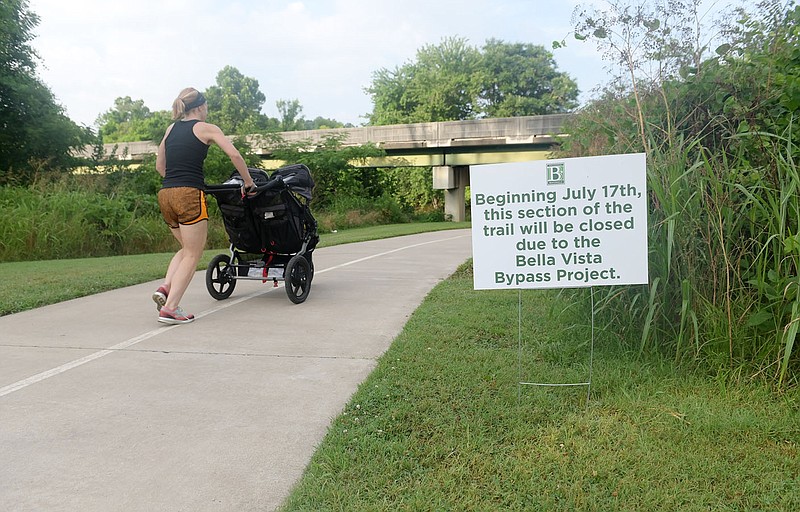 A jogger passes a sign on Wishing Springs Trail in Bentonville announcing the closure of the trail July 17th for construction of the Bella Vista Bypass. The city of Bentonvilleâ€™s facebook post says the section of trail which goes under I-49 and Walton Blvd. is expected to be reopened in the fall of 2021. (NWA Democrat-Gazette/Spencer Tirey)

BENTONVILLE -- Construction of the Bella Vista Bypass interchange with U.S. 71/Walton Boulevard and Interstate 49 requires a partial closing of the Wishing Springs Trail, according to Arkansas Department of Transportation officials.

Weather permitting, crews will close a section of the trail within the work zone beginning Monday . The trail will be closed southeast of the existing Bella Vista Bypass roundabout to the northbound U.S. 71/Walton Boulevard on-ramp. The closing will be in place throughout the project's construction.

The trail, which runs through a flood area, will be moved to higher ground as part of the interchange project.

A temporary, alternative connection is being sought. Highway officials say the trail could be closed until the interchange project is finished, which could be up to a year.