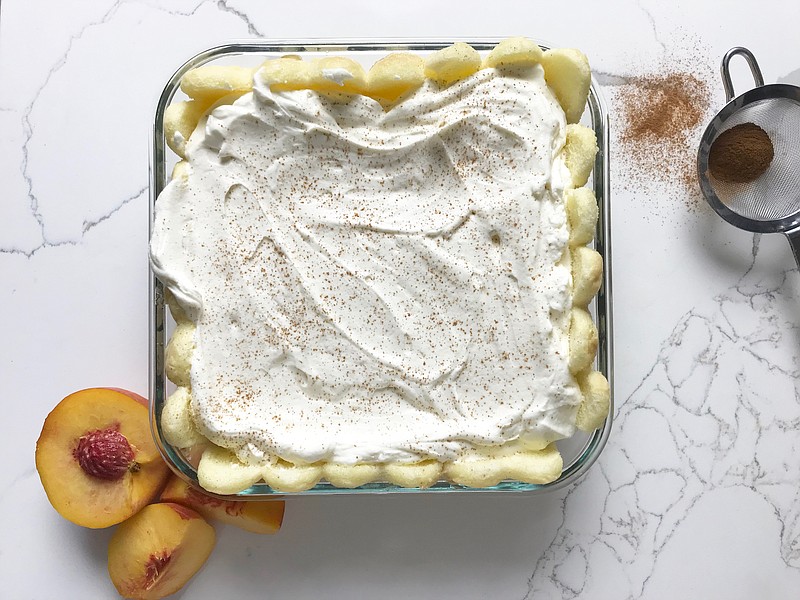 I haven't felt like turning on the oven much lately. Yes, of course, part of it is the heat. But also, more than that, I'm just not getting the fulfillment from baking that I usually do.

But for the past month or so, I haven't felt like baking.

I recall another time in my life when I was struggling and didn't feel like doing something that I loved and my doctor told me to do it anyway. And keep doing it, whether I wanted to or not. And eventually, I would embrace it again.

Basically, she said to fake it.

Yet, my sweet tooth hasn't waned with my desire to bake, which led me to the creation of this dessert.

It's a seasonal twist on tiramisu, but rather than coffee, rum and cocoa, it's flavored with peaches, bourbon and just a touch of cinnamon.

In a large bowl, combine the peaches, brown sugar and lemon juice; toss well to coat. Set aside.

In a medium bowl, whip the cream, mascarpone, granulated sugar and 4 tablespoons of the bourbon until thick and fluffy; set aside.

In a shallow dish, combine the milk and remaining 2 tablespoons of bourbon.

Drizzle the ladyfingers with milk-bourbon mixture.

Line the bottom and sides of an 8- or 9-inch square baking dish with the milk-and-bourbon-drizzled ladyfingers.

Spread the mascarpone mixture over the ladyfingers and dust with a little cinnamon. Cover and refrigerate 4 to 12 hours before serving.