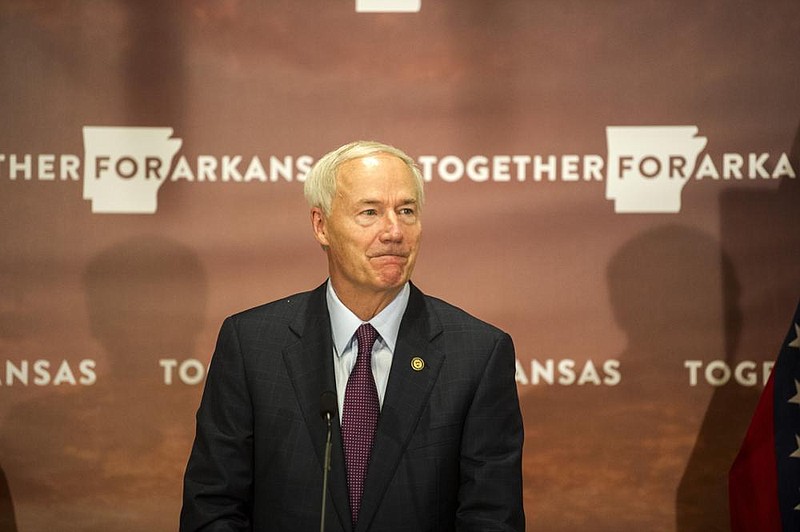 Gov. Asa Hutchinson again Tuesday defended his mask mandate despite pushback, adding that he doesn’t like it either. More photos at arkansasonline.com/729gov/. (Arkansas Democrat-Gazette/ Stephen Swofford) - Photo by Stephen Swofford

Arkansas' coronavirus latest statistics were deemed "not good numbers" Tuesday by the governor, who noted that the total of cases since the pandemic began topped 40,000, current hospitalizations rose above 500 and the death toll jumped by a single-day record of 20.

The total number of coronavirus cases rose by 734 over the previous 24 hours for 40,181 cases since the pandemic began March 11, said Dr. Jose Romero, interim secretary of health. Correctional facilities were the sites of 20 of the new cases, while 714 were in the general community.

Six of the deaths were late reports, Romero said.

The number of covid-19 patients on ventilators Tuesday was at 110.

The state had 6,565 cases considered active with 33,188 recovered, according to Health Department data.

"Now those periods change depending on how severe the infection is," Romero said. "It can be anywhere from 10-20 days."

Pulaski County reported the most new cases, with 55; followed by Benton County with 50; Mississippi County with 48; Sebastian County and Washington County each with 45; Pope County with 36; and Faulkner County with 34, according to Hutchinson.

Hutchinson unveiled a new color-coded map on Tuesday that indicates the positive rates by county.

By using deepening shades of red, the map ranges from a low of 1.5% to a high of 32.5% of the number of positive tests out of the cumulative tests administered in that county.

"You can see the breadth of the spread," Hutchinson said.

The graphic shows five counties -- Washington, Yell, Hot Spring, Lincoln and Lee -- shaded in the darkest red to indicate the highest percentage of positive cases in the state.

Lincoln County is home to the Cummins prison unit, where 1,062 inmates and 69 employees have tested positive for the virus.

The map shows Washington County -- which had the highest number of cases in the state at 5,783 -- with a positive rate of 21.3% out of 27,131 tests administered, one of the highest in the state. The county has seen 42 deaths attributed to covid-19.

By comparison, Pulaski County, the most populous county in the state, was in the pink on the map with 7.4% of its 60,761 tests coming back positive. There have been 4,492 covid-19 cases there and 74 deaths.

Hutchinson said the new map will be tweaked to show more and narrower information in the future.

"This is helpful to us as we make decisions on our testing, on our focus, on resources, as we measure schools. If they have a positive covid case in a school after it starts, how do you respond to that?" Hutchinson said. "Some of it will be the extent of spread in the community. This helps give us that information. Now, we need more information than this because this is a cumulative total from day one. I want more contemporary numbers."

Hutchinson said the processing of covid-19 tests by the state Health Department labs is keeping up with demand, but commercial labs continue to lag because of a national shortage of testing supplies and reagent.

The state lab processes about 15% of the tests in the state, according to Health Department data.

As of Tuesday, nearly 490,000 tests by commercial and state labs have been administered in the state.

Hutchinson said the state's testing is "in pretty good shape," but he's not sure if his goal of having 200,000 tests conducted for the month of July will be attainable. Currently, there have been about 170,000 tests administered for the month, with three days to go.

"The bulk of our testing results, probably at least 60% come from commercial labs. They're across the nation, there's about six of them," Hutchinson said. "Individuals from all California, Texas, Florida all are flooding those commercial labs to get testing results. That huge backlog has increased the delay."

The governor also said the results from the 200 point-of-care antigen test machines that were recently purchased by the state will be counted separately from the total tests administered in the state.

The antigen tests "do not have quite the same level of accuracy" as the normally used polymerase chain reaction, or PCR, tests, Hutchinson said. The antigen tests are performed on a nasal swab sample and take only minutes to detect coronavirus proteins.

The PCR tests, which also use a nasal swab, detect genetic material from the virus, Romero said.

Hutchinson said that even though the antigen tests will be separately calculated, "it will still be good information for everyone."

Antigen tests are different from the antibody tests, which show the presence of covid-19 antibodies in a person's blood, indicating a previous covid-19 infection. Antibody tests are not included in the state's testing total.

Both Hutchinson and Romero said that even with slow test results, contact tracing is still important in the process.

"A delay in receiving the positive result will lead to a delay in talking to the individual and identifying those contacts," Romero said. "But it's still important to go through that and to look for those cases. We need to try to track them down."

"It's an essential investment that we have to do," Hutchinson said.

Hutchinson remained staunch in his belief that the mandate to require masks in the state was the right course of action to fight the pandemic.

[Video not showing up above? Click here to watch » https://www.youtube.com/watch?v=7pACCoaY_Ro]

The resistance from some legislators and the public was the reason he waited so long to issue the mandate, he said.

Generally, results of a mask mandate will be seen in about two weeks, the governor said.

The mandate was issued July 16 and took effect July 20.

The governor said he understands the cries of freedom and independence from those railing against the mask mandate and added that he doesn't "like it either."

"I think most Arkansans understand what we're doing and the need for it," he said.

Hutchinson also said that the state was not ready yet for full-contact high school athletics.

"It's simply the responsibility of the chief executive, the governor of the state, to have to make some of those tough decisions and to be held accountable for them. But I hope everyone sees that we do not issue restrictions on businesses lightly. We resisted," Hutchinson said.

"The stay-at-home order, we resisted. Shutting down businesses [we resisted]. And when we could, we lifted the restrictions. It's a matter of balancing the priority on public health and getting a handle on the cases and the deaths that we see from the virus with the independent spirit of Arkansans and the freedom that they experience." 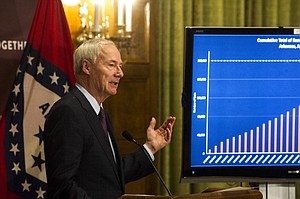 Photo by Stephen Swofford
“These are not good numbers,” Gov. Asa Hutchinson said Tuesday of the increase in coronavirus cases, hospitalizations and deaths. (Arkansas Democrat-Gazette/Stephen Swofford)