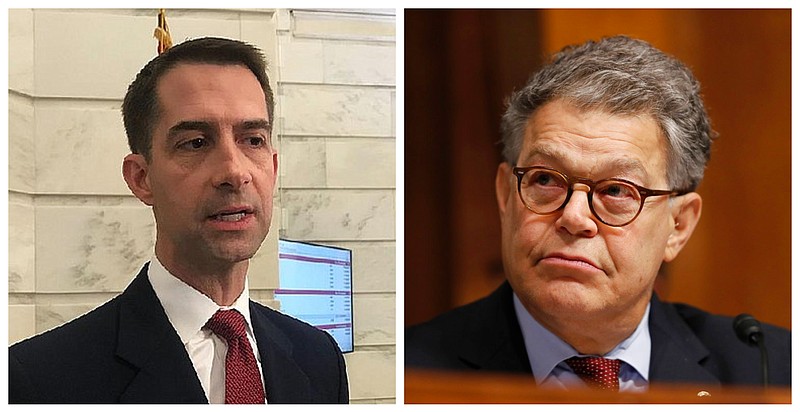 WASHINGTON — An inflammatory comment about the Holocaust, attributed to U.S. Sen. Tom Cotton and purportedly taken from the Arkansas Democrat-Gazette, never appeared in its pages, originating, instead, in a fictional article on the website of former U.S. Sen. Al Franken, D-Minn.

The dispatch, which claims to come from the Associated Press, was not labeled as parody or satire; Franken is a former “Saturday Night Live” writer and performer.

“Sen. Tom Cotton did not speak to the Arkansas Democrat-Gazette about the Holocaust. Reports that he was quoted in the newspaper speaking about the Holocaust are fabricated,” the paper’s managing editor, Eliza Hussman Gaines, said in a written statement Wednesday.

Cotton, a Little Rock Republican, was sharply criticized this week after telling the Democrat-Gazette that slavery was a “necessary evil” in the eyes of the Founding Fathers.

Without it, he has said, the Constitution would not have been ratified and the 13 states would never have united.

Cotton later said he had not endorsed the Founder’s view. Without the Union, however, no one would’ve been able to stop the fascists and the communists in the 20th century, he posited.

[Audio not showing up above? Click here to listen » arkansasonline.com/cottoninterview/]

Tuesday, a fictional story, titled “Tom Cotton — The Holocaust ‘A Necessary Evil’ — was posted on Franken’s website and began spreading via social media.

It claimed that Cotton was “embroiled in yet another controversy after telling The Arkansas Democrat-Gazette that ‘the Holocaust was also a necessary evil.’” It also included quotes from a fictional television interview, with Cotton telling Fox News that “the editors of the newspaper had ‘taken my words out of context.’”

Without the Holocaust, the state of Israel wouldn’t have been formed, a necessary step before Jesus can return “in the clouds of glory,” the story states, attributing the view to the Arkansas politician.

When posted on social media, the article appears to be an actual news report. On Twitter, people have expressed outrage after reading the new account.

Franken and Cotton, while on opposite ends of the political spectrum, are both Harvard graduates and their times in the Senate overlapped.

The Democrat is Jewish; the Republican is Methodist.

Cotton regularly appears on right-wing radio and television news outlets. Franken is the author of a best-seller, “Rush Limbaugh Is a Big Fat Idiot and Other Observations.”

The Minnesotan stepped down last year while facing claims of sexual misconduct, bowing to pressure from members of his own party, who saw no need for a hearing into the allegations.

Seven current and former U.S. senators later said they had been wrong to demand his resignation, the New Yorker later reported.

Maggie McNeary of Arkansas Online contributed to this report.