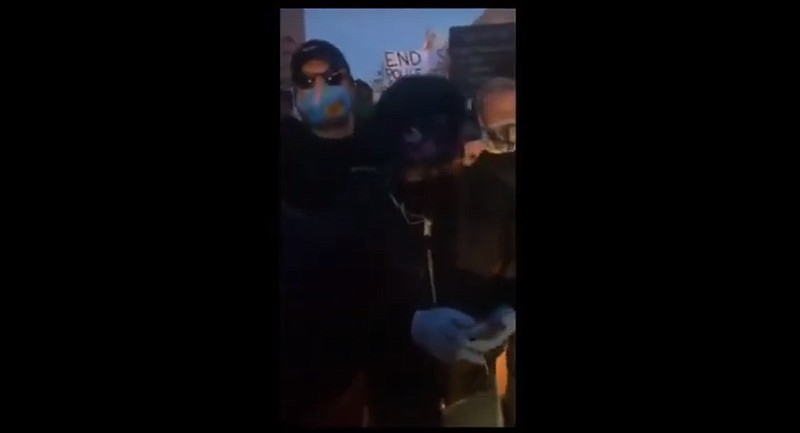 BENTONVILLE — Police use of tear gas to quell the June 1 protest on the Bentonville city square in the wake of George Floyd’s death was both unprovoked and not so, depending on a person’s point of view, police reports say and video of the event shows.

Sam Lopez of Springdale said he was protesting peacefully for two hours or so when suddenly as many as 40 law enforcement officers wearing gas masks, helmets and other protective gear poured out of the Benton County Courthouse’s front door.

Most carried riot batons — 3-foot-long sticks made of hardwood.

“We saw all those deputies come out, and we’re all saying, ‘What’s going on? They didn’t have to do that,’” Lopez said.

What none of the protesters on the town square knew was that just a few blocks away city police officers in two vehicles had narrowly escaped attacks, witnesses say, and police records and video show. A small group of protesters had surrounded and damaged the police vehicles.

The Bentonville protest was one of hundreds after the May 25 death of Floyd, 46, a Black man who died while being arrested by a white Minneapolis police officer. A video of the incident sparked protests the world over.

Early on June 1, Bentonville police began preparations after receiving warnings from the Arkansas State Police that people were traveling to the city to incite violence at that day’s protest, Police Chief Jon Simpson said.

Police had learned of the planned protest through social media posts, according to the Bentonville department’s summary report. The protest took place on a Monday. Police spent the previous weekend trying to contact its organizers, according to the report.

“Antifa, a known organization that has a history of violence in protest and demonstrations, also put on social media posts that they would be in attendance,” the report said. “Additionally, several pro-2nd amendment groups advised they would be on the square and openly carrying firearms.”

Members of the Police Department met with officials of the Fire Department, the sheriff’s office and the state police to discuss how to handle the approaching situation. The state police force was stretched thin because of similar protests around the state and was unable to provide any manpower, the report said.

On the evening of June 1, as many as 2,000 people converged on the Bentonville square, according to estimates.

Police had observed people among or near the protesters carrying heavily laden backpacks, guns and knives, Simpson said.

At 8:51 p.m. northwest of the square a breakaway crowd moved to surround a Bentonville police Chevrolet Tahoe, communications logs and video show. Protesters cursed at the officers and yelled at them to kneel as the vehicle pulled away from them, reports say.

Then the crowd moved toward a nearby Ford F-250 police pickup on a side street north of the square. Protesters rushed to surround it and rolled an empty dumpster to try to block its path, police records say.

Video shows protesters holding their signs against the pickup’s windshield, side windows and in the line of sight of the back-glass. Some protesters jumped on the pickup’s front bumper and others on the side steps, according to officers’ reports.

The officers inside could not see out, according to police reports, except through the rearview miniature camera. Using that electronic device, the driver slowly backed up the pickup. Maps of the area indicate that the truck backed almost a quarter-mile before clearing the pursuing crowd and turning down a street to escape.

That police account is consistent with video taken at the scene.

Video shows that neither vehicle incident occurred within clear sight of the main body of protesters, who peacefully circled the square carrying signs and chanting.

Police officers had formed a line in front of the courthouse and were stationed with police vehicles blocking intersections leading to the square, records and video show. Some officers mingled with the crowd to offer assistance and mediate disputes, said Autumn Tolbert of Fayetteville, an attorney who covered the event as a freelance journalist.

Many of the protesters gathered around the square’s fountain. Video shows some confrontations, but a mostly peaceful scene.

“People still had their kids there,” Tolbert said.

That was shortly before tear gas was deployed.

Officers with the Benton County sheriff’s “mobile field force” had been stationed inside the courthouse in case they were needed.

Simpson was monitoring the situation from the law enforcement emergency operations center in City Hall.

At 9:15 p.m., about 20 minutes after the police vehicles were attacked, members of the sheriff’s mobile field force emerged in riot gear from the courthouse, according to the time stamp on video taken from courthouse security cameras.

Sheriff Shawn Holloway declined to comment on why he deployed the field force.

The main body of protesters crossed the street in front of the courthouse, demanding to know what the show of force was about, audio from other video reveals.

That face-off between the main body of protesters and authorities on the courthouse steps provided an opening for provocateurs, Simpson said. They threw water bottles, some of them frozen, rocks, other objects and at least one bottle of urine at the officers, he said, and witnesses and video confirm.

Lopez said the crowd yelled at the throwers to stop, but to no avail.

The plan, which Simpson said he coordinated with the sheriff, was to issue warnings continually for five minutes for people to disperse before deploying tear gas if they didn’t. The first warning went out to no effect, he said.

“The crowd was ordered to disperse, but it is entirely possible that message was not heard.”

“There was chanting, screams and yelling, and even a tuba playing,” he said.

Officers had issued only one warning when “suddenly, gas starts flying,” Simpson said. He didn’t speculate on who fired the first canister. The sheriff declined to comment.

A man shot a large-caliber pistol into the air after the first volley of tear gas, according to Simpson and police records.

“We were not going to have a gunfight in a crowd of people,” Simpson said. The protest needed to end, he said. “It’s remarkable those rounds fired in the air didn’t hit anyone in town when they came back down.”

At least some of the protesters left after the first volley of tear gas, video shows. Police used at least four more volleys before the last protesters left.

The night ended with two arrests.

It is Northwest Arkansas’ only protest sparked by Floyd’s death to date that has resulted in force being used against demonstrators.

Nearly all of the Bentonville Police Department’s 84-person force was deployed, although not all of the officers were at the square, Simpson said. The city still had to be patrolled.

The events of that night resulted in 263 overtime hours for his department, Simpson said. The two vehicles that were forced to flee received a combined $7,386 in damage, police records show.

Bentonville police called for assistance and officers from the departments of Rogers, Bella Vista, Centerton, Lowell, Springdale, Pea Ridge, Siloam Springs and Cave Springs responded, along with members of the Washington County sheriff’s office and the Arkansas State Police.

Protesters reacted to the field force’s appearance at the bottom of the courthouse’s steps by rushing up to the line, video from the courthouse and photos show. The main body of protesters demanded to know what the show of force was for.

“I would definitely be comfortable saying that it was not perceived well,” Simpson said of the field force emerging from the courthouse. “It’s not reasonable to believe everyone knew what was happening,” he said.

Using police vehicles to block intersections near the square “was kind of a mistake, maybe the first one,” Simpson said in a July 15 interview. Patrol cars at intersections blocking traffic access to the square were unintentionally provocative, he said.

“Having police there was symbolic more than I expected. And I didn’t think of how we would move them if we needed to.”

Simpson decided to use parked police vehicles instead of street barricades because people have driven cars into crowds of protesters in other places in the country, he said. He wanted barriers that would stop a speeding car, he said.

[Video not showing up above? Click here to watch » https://www.youtube.com/watch?v=DVDMpiJGJW0]

Another mistake was emptying all of the trash dumpsters, Simpson said. In other places where protests had turned violent, some had poured gasoline into full receptacles and started fires. The department sought to prevent that in Bentonville by having all of those containers near the square emptied.

However, an empty dumpster is easily moved, Simpson said. That is what happened in an apparent attempt to block the pickup’s retreat, he said.