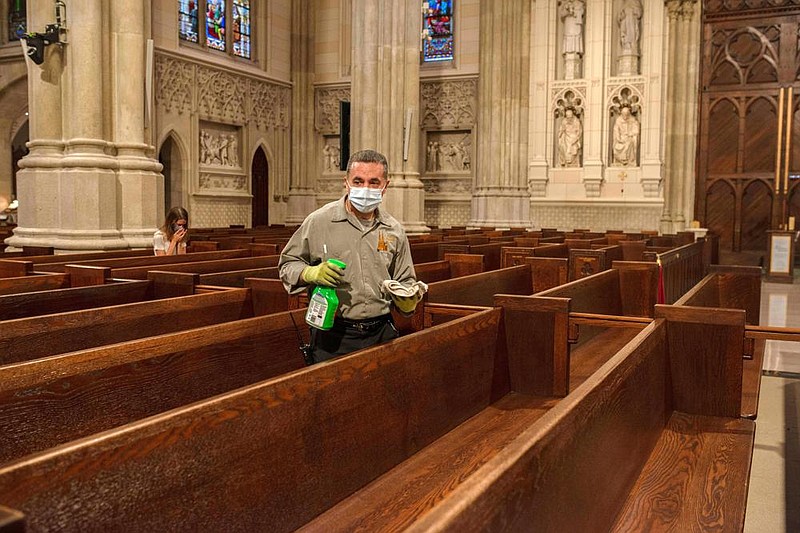 A worker cleans the pews at St. Patrick’s Cathedral in Manhattan. Monsignor Robert Ritchie, the cathedral’s rector, said St. Patrick’s is struggling financially without donations from the thousands who turn out each week for Sunday Mass, and the more than five million tourists who come through the building each year. (The New York Times/September Dawn Bottoms)

NEW YORK -- St. Patrick's Cathedral, one of the most famous churches in the United States, has long depended on tourists and office workers to fill its pews and its collection plates. But now that the coronavirus has left midtown Manhattan largely deserted, it is facing a $4 million budget shortfall that may threaten its ability to pay its bills.

The cathedral sits in one of the least residential parts of the city, and its rector estimates that 90% of those who typically worship there do not live nearby. The pandemic has kept visitors away for months, depriving the cathedral of revenue and leaving it marooned in a sea of empty office buildings, vacant hotels and boarded-up luxury retailers.

Despite donations, federal coronavirus relief funds and its status as the crown jewel of the powerful Roman Catholic Archdiocese of New York, the situation has imperiled the cathedral's ability to pay operating costs such as utilities and payroll for dozens of employees, including musicians who perform at Mass and maintenance workers who clean and disinfect the pews.

"We have never had anything like this before," Monsignor Robert Ritchie, the rector of the cathedral, said of the budget shortfall, which is equivalent to about one-quarter of the cathedral's annual income.

He said the problem had been compounded by the lack of fundraising options available at a time when social gatherings are subject to public health restrictions.

"All the traditional things we have had in the past, dinners and things like that, we can't do," he said. "The options are to beg, which is what I have been doing since March 15."

The Archdiocese of New York stretches from Staten Island to the Hudson Valley, excluding Brooklyn and Queens, and its population is more than half Catholic. It is one of the most populous and influential districts of the church in the United States.

But the area around St. Patrick's Cathedral has been transformed by the pandemic.

Stores like Saks Fifth Avenue, just to the south, were boarded up during the looting that marred racial injustice protests in June. Across Fifth Avenue lies the normally bustling plaza of Rockefeller Center, where the crowds are gone and the statue of Prometheus sits perched above the ice skating rink with a mask strapped across his face.

The archdiocese does not pay for the cathedral's upkeep, and in fact the opposite is true: St. Patrick's Cathedral is organized as a parish, similar to a neighborhood church in a more residential area, and it pays an 8% tax to the archdiocese.

Like any other Catholic parish, the cathedral relies heavily on donations collected at Mass to make ends meet. On a typical Sunday, 12,000 to 15,000 people attend Mass in its soaring nave. Before the pandemic, income from a variety of sources amounted to roughly $1 million a month, Ritchie said.

"We rely on the goodness and generosity of people to support us because we don't get any money from any other source beside what comes in through our doors," he said.

But St. Patrick's Cathedral -- which opened in 1879, a time of widespread anti-Catholic sentiment as well as rising Catholic immigration from countries like Ireland and Italy -- has also relied on the federal government.

Federal data show that it received between $350,000 and $1 million through the Paycheck Protection Program, a $659 billion fund created by Congress to help companies and nonprofit organizations, including religious ones, avoid layoffs during the economic crisis caused by the coronavirus outbreak.

Ritchie said the loan was for less than $1 million, but he declined to provide an exact amount, saying he thought the archdiocese did not want the number to be publicized.

The monsignor said the federal loan helped the cathedral avoid furloughs or layoffs for all of its 50 to 80 employees, including maintenance and security staff, gift shop employees and four salaried musicians.

A second loan, in the range of $1 million to $2 million, was given to the Trustees of St. Patrick's Cathedral, which Ritchie described as a separate entity charged with maintaining the cathedral's exterior and administering several large cemeteries it owns across the region.

More than 5 million of the people who come through St. Patrick's doors each year are visiting tourists, the monsignor said. The largest crowds come at Christmas when a towering tree is erected across the street at Rockefeller Center, followed by Easter and during the summer.

Many visitors buy souvenirs at the cathedral gift shop, slide a suggested $2 into a donation box to light a candle, or download self-guided audio tours to their smartphones for as much as $25.

The monsignor said gift shop revenue, which typically amounts to 10% of the cathedral's monthly income, had dropped 80% since the pandemic hit.

The cathedral usually makes $2 million to $4 million annually just from the money people give when lighting candles and offering prayers. That revenue stream has also dried up.

"The Easter season had literally no visitors because the church was closed until June," the monsignor said. "I suspect that the summer season will be drastically reduced in visitor volume, so we will continue to urge our friends to continue helping us to keep going."

The financial pain at St. Patrick's is faced by many less-famous parishes after months of coronavirus-related shutdowns.

Matthew Manion, a professor at Villanova University, surveyed 92 of the 177 Catholic dioceses in the United States and said that for most, revenue had plunged about 50% since March. Some reported drops of as much as 85%, he said.

Manion said many parishes "expect to see collections pick up about now as churches start to reopen" but are bracing for another wave of virus infections.

In the months since the pandemic began, Ritchie said the cathedral's revenues had fallen by about 35%. Donations dropped 80% to 85%, he said, but that steep loss was offset by generous donations from "benefactors" whom he declined to name.

In an interview, he alluded to the help provided by members of the cathedral's board of trustees, which includes wealthy finance, real estate and public relations executives.

Sunday Mass resumed at the cathedral June 28, the first Sunday after the city entered phase two of the coronavirus reopening plan, but the number of services at the cathedral was reduced to three from eight, and attendance at each was capped at 25% capacity.

Those restrictions limited the number of worshippers from a typical high of 15,000 to a possible maximum of 1,800, although fewer than 400 people attended its first two Masses that Sunday, including one celebrated by Cardinal Timothy Dolan.

The limited resumption of Sunday Masses has not done much to ease the financial crisis. The monsignor said the cathedral collected $15,000 in total over the first two weeks, compared to a weekly income of as much as $150,000 in normal times.

The night before a recent Mass, a team of cleaners draped in plastic suits sprayed a disinfecting mist throughout the space. During the Mass, ushers made sure that worshippers sat at least two pews apart from one another and wore masks. Afterward, parishioners said they were glad to be back to some version of normal.

"The government should not stop us from going to Mass," said Antoinette Kzandziera, 85, who traveled from her home on the Upper West Side to the cathedral on a hot summer day. "All of life is in God's hands. It is not in the hands of a mask or a vaccine. If God wants us to be safe, we will be safe." 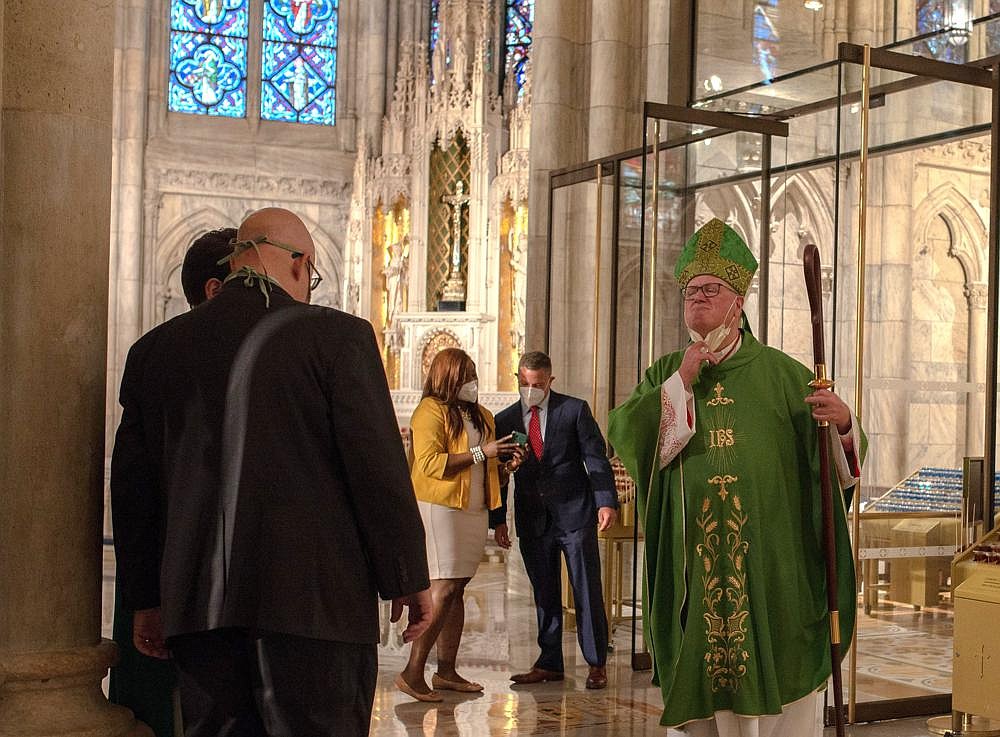 Cardinal Timothy Dolan after a Mass on June 28 at St. Patrick’s Cathedral in Manhattan. (The New York Times/September Dawn Bottoms)