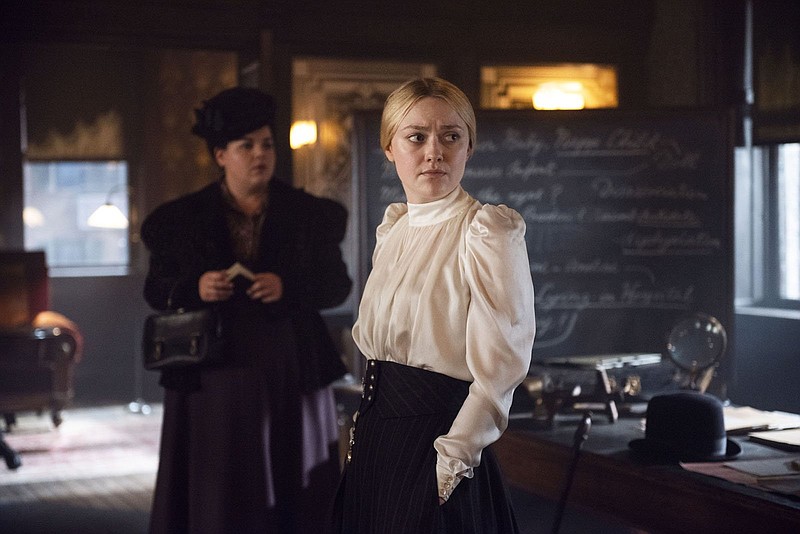 We accommodate all sorts of sadism and bloodshed in period crime stories, as long as we get the right sort of eyeful along with it — "atmosphere," as it's generally described. Seductive production design, bamboozling digital re-creations of vanished eras of American life, the clip-clop of horse-drawn carriages all play their part in the soothing illusion of the past. The depravity may be pervasive but the clothes look swell.

Case in point: "The Alienist: Angel of Darkness," which premiered on TNT on Sunday. This is the second and, based on the first four (out of eight) episodes I've seen, the more interesting season of TNT's adaptation of Caleb Carr's mystery novels.

Daniel Bruhl retains top billing as Dr. Laszlo Kreizler, the half-Sherlock, half-Sigmund criminal psychologist re-joining forces with John Moore, now a New York Times reporter, played by dashing Luke Evans. This season these two take a back seat to the character of Sara Moore, bumped up to head of her own, all-female, 1897-era detective agency. Dakota Fanning benefits from the new season's repositioning of the triangle, with her at the apex.

As with Season One, "Angel of Darkness" lurks within a venal realm of the Gilded Age. A woman, sentenced to death, appears to have murdered her infant child, though the body has disappeared. A second baby, the daughter of a Spanish government official, disappears as well. New York City's power brokers, including newspaper publisher William Randolph Hearst, seizes on the second case to foment anti-Spanish jingoism on the brink of the Spanish-American war.

Early episodes point to the shadowy evildoing inside a Manhattan maternity hospital. (All of this is teased in the second-season trailer.) It's something to do with the fate of "fallen women," many of whom find dubious employment at the clinic. Their only crime was falling into the clutches of some of the richest, most connected men in America.

So it's a two-baby search, fraught with peril around every corner. The first four hours get by on atmosphere, with storytelling coming in second. The series' page-turning techniques are shameless. (Count on several cut-to-commercial vignettes featuring wailing, vulnerable babies in cribs, at the mercy of their unseen caretakers.) Dread isn't the same thing as suspense, though, and "Angel of Darkness" indulges in the former more than the latter. (The first-episode capper, set in a posh department store toy shop, is both brief and shocking, in the right way.)

Fanning's sincerity is wholly free of artifice, though there are times she seems to be reminding herself to steer clear of "up-speak" cadence and to end every question with the flattest affect possible. Bruhl's character, like the Spanish diplomats searching for their missing child, is looked upon as a "foreign undesirable" by the moneyed Manhattan class. His reticence works as a defense mechanism. Even when Kreizler's role in the mystery becomes more expedient than dramatic, the actor has a way of never breaking period, while never seeming less than spontaneous and alive. (There's a nice moment when Kreizler, robbed of a fine meal, briefly contemplates stealing a dessert off a tray.)

Filmed in Budapest, on elaborate, mid-budget sets and in some lovely, historically convincing locations, "Angel of Darkness" has some fine playwrights-turned-producers/screenwriters on its roster, including Diana Son ("Stop Kiss") and Gina Gionfriddo ("FBI: Most Wanted"). Directors David Caffrey and Clare Kilner lean into various alleyways of female exploitation, though without the same male-gaze salaciousness found, for example, in the current HBO "Perry Mason." That story, too, hinges on stolen infants in a Gomorrah without pity, in its case 1932-era Los Angeles. Note to showrunners and screenwriters: There's more than one way to instill cheap dread in a pandemic audience.)

While "Angel of Darkness" has its blaringly anachronistic moments — "sounds like a plan," Sarah says at one point — it's well-tooled and visually detailed enough to keep you coming back for more genteel punishment. For every throat-slitting or limb-sawing, there's a pretty establishing shot of late 19th-century Manhattan from an impossible aerial viewpoint. On the ground, "Angel of Darkness" has the good sense to leave much of the period-evocation persuasion to the actors.