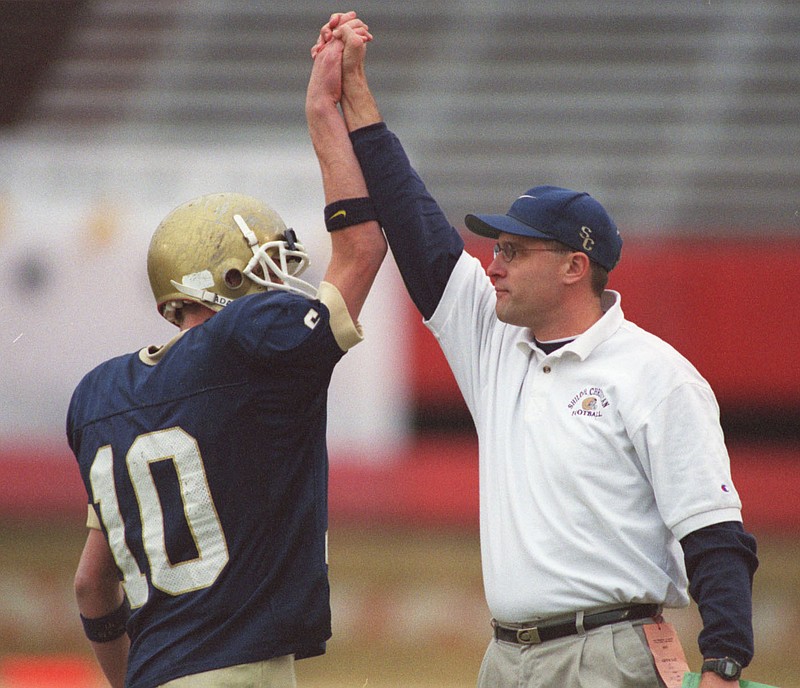 Arkansas Democrat-Gazette/KARL A. STOLLEIS Rhett Lashlee, left, and Gus Malzahn celebrate a Shiloh Christian touchdown in the 1999 state championship game against Carlisle. Lashlee starred for three seasons at Shiloh Christian, leading the Saints to a pair of state championships. Malzahn is now the head coach at Auburn, and Lashlee is the offensive coordinator at the University of Miami.

Rhett Lashlee was indoctrinated into the hurry-up, no-huddle offense at an early age, and he continues to lean on those early principles as the offensive coordinator at the University of Miami.

Lashlee was just a seventh-grader when Gus Malzahn arrived on the Shiloh Christian campus in Springdale. Malzahn soon realized that if he wanted to be successful on the state level, he needed to create a system that did not rely on smash-mouth power, but a high tempo attack that would sap the opponents' energy as the game wore on.

"At Shiloh, we did not have a lot of Division I athletes," Lashlee said. "I was one of our fastest players and I ran a 4.6. We didn't have a lot of games where we had better players than what we were facing. But we still beat them and sometimes handily, and that was more because of the style of play and philosophy. I believe that if you play with tempo and play fast, if you have lesser talented players, it's going to help you play better than you are and maybe beat some teams you shouldn't.

"And if you use that same formula when you have elite players, then that is when you can play for championships."

Lashlee and the Saints proved that last part for sure. As a three-year starter at quarterback, Lashlee was 40-3-2 and played in three state championship games, winning two. As a college coach, he has applied those same principles at Arkansas State, SMU, Auburn and now Miami to create high-octane offenses.

"Coach Malzahn was doing it with the high school guys and we thought, if the high school guys are doing it, we need to do it all the way down," said Wood, who is now the head coach at Springdale Har-Ber. "So Rhett was running the hurry-up, no-huddle as an eighth-grader. We had the plays on a wrist band and later we just removed the wristband and just used hand signals.

"What we were doing just made the game fun. It spread teams out and made it real appealing to all kids."

By the time Lashlee fired his last pass at Shiloh Christian in the 2001 state championship game against Augusta, his numbers were astounding. He completed 853 of 1,430 passes for 13,189 yards and a national record 171 touchdowns.

Lashlee vividly recalls what many consider the greatest offensive game ever played in Arkansas, the 1999 epic at Junction City in the quarterfinals of the state playoffs when he was a sophomore.

"Probably the closest game that I've been to as a coach in terms of crazy was the Kick-Six Iron Bowl in 2013. And that was pretty wild," Lashlee said. "But as a player, no other game compares."

The game was delayed by a power outage, but Junction City had plenty of electricity and jumped out to a 24-0 lead against the bewildered Saints.

"I will never forget standing on the sideline thinking, one, I'm not ready to start basketball on Monday," Lashlee recalled, "and two, Kevin Johnson was our defensive coordinator, and he looks at Gus after Marcus Godfrey ran about 95 yards and made it 24-0, and Gus goes, 'I think they might score 100.' Kevin looked at Gus and said, 'yep, I think you're right!'

"Not exactly what you want to hear from your DC, but somehow we just started chipping away and it may have been in our favor that the scoreboard wasn't working because of the power outage. It didn't look as bad when you can't see you're down 24. But we found a way to win which was really cool."

Lashlee signed with the University of Arkansas and was a back-up quarterback behind Matt Jones until a back injury ended his career. He was on Malzahn's coaching staff at Springdale while he finished school, then left coaching for a couple of years before rejoining his former coach, first at Arkansas as a grad assistant, then at Arkansas State and Auburn.

Lashlee said one of his fondest memories was finally getting a chance to play Springdale in 2000. The Saints had lobbied for the game for several years and finally, the game was scheduled.

"When we played at Springdale and tied them (7-7), that was probably our biggest deal for our program," Lashlee said. "We finally established that we could play with the bigger schools. That was Gus' last year at Shiloh and the next year he went to Springdale to replace Jarrell Williams. Being a Springdale kid, that game had been in debate for about five years. It finally happened and it was a great game. Sadly, it ended in a tie." 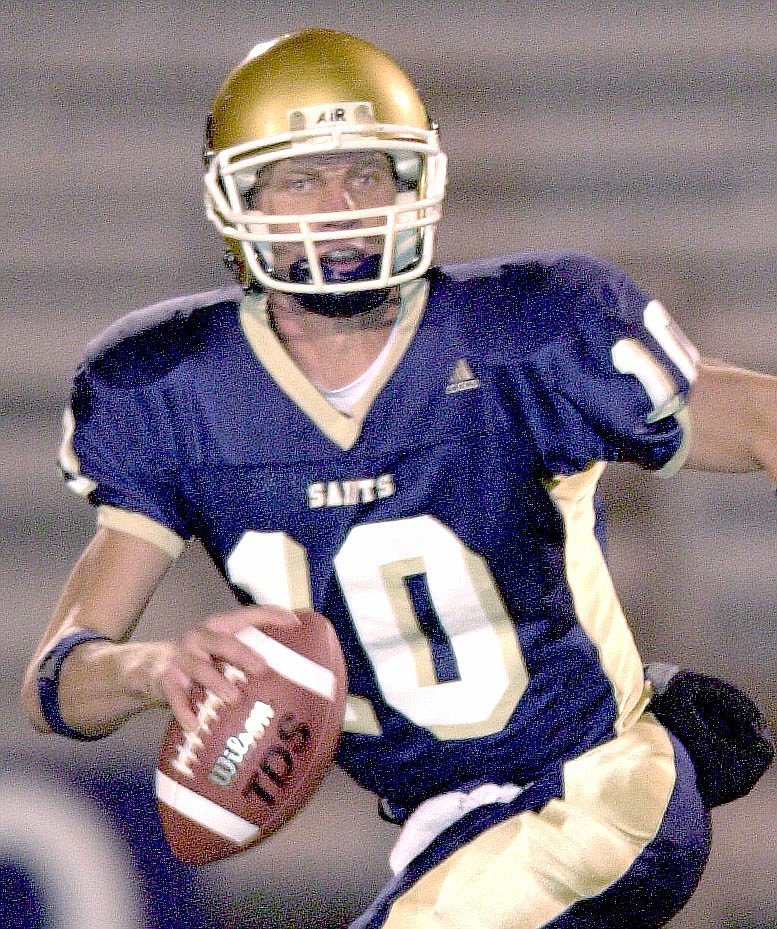 Arkansas Democrat-Gazette/JEREMY SCOTT Shiloh Christian quarterback Rhett Lashlee looks for an open receiver against Decatur in a 2001 game. Lashlee led Shiloh Christian to two state championships and ranked among the top passers in the nation with more than 13,000 career yards and 171 touchdowns. Today, Lashlee is the offensive coordinator at the University of Miami.
More News

CREDENTIALS Lashlee was one of the nation’s most prolific quarterbacks from 1999-2001, leading Shiloh Christian to a 40-3-2 record and two state championships. … In his career, Lashlee was 853 of 1,430 passing for 13,189 yards and a then national-record 171 touchdowns. … In a wild 70-64 win against Junction City, Lashlee was 36-of-59 for 672 yards and 8 touchdowns and ran for 67 yards and 2 touchdowns. … Now the offensive coordinator at the University of Miami.

THAT’S WHAT HE SAID “At Shiloh, we did not have a lot of Division I athletes. I was one of our fastest players and I ran a 4.6. We didn’t have a lot of games where we had better players than what we were facing. But we still beat them and sometimes handily, and that was more because of the style of play and philosophy.”