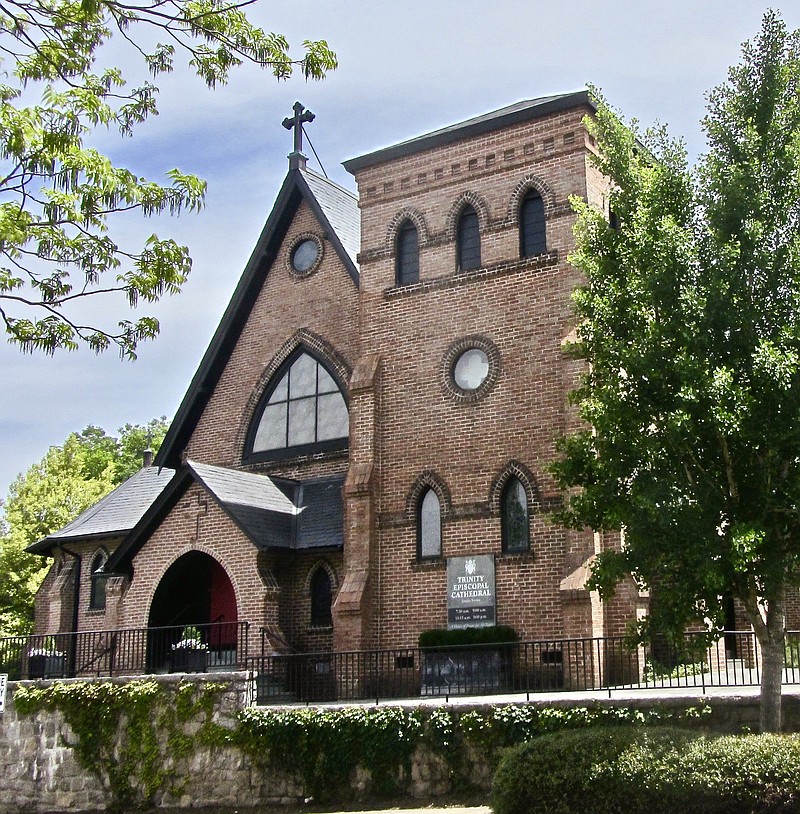 Trinity Episcopal Cathedral in Little Rock, which occupies a full block of buildings and grounds, will see a new dean and rector next month when the Rev. Amy Dafler Meaux begins her time leading the cathedral, which serves as the seat of the Episcopal Diocese of Arkansas. (Special to the Democrat-Gazette/Marcia Schnedler)

When the Rev. Amy Dafler Meaux begins her new role as the 21st dean and rector of Little Rock's Trinity Episcopal Cathedral next month, she'll start by getting to know the staff.

Meaux, 45, said she will be doing that virtually, as her new office at the cathedral -- along with the rest of Trinity -- has remained closed since late March during the coronavirus pandemic.

Trinity will be new but not unfamiliar to Meaux, who grew up attending Lutheran and later Episcopal churches, and has long considered church to be a place where she feels safe and at home.

It's also where Meaux, the first woman to lead the Cathedral in its 136-year history, plans to delve into the work of an Episcopal parish and diocese going forward in the faith during a historic time: a global pandemic and international calls for change in the fight against systemic racism and police brutality against Black Americans.

Watching an ordination with her parents when she was 7 or 8 years old, Meaux, who was born in South Carolina and spent the early years of her childhood in North Carolina, knew she too wanted to be a priest.

"I remember thinking, like, 'That's what I'm going to do one day,' she said.

It would be the draw of the physical church and her deep sense of connection to Jesus that helped her through the later years, as a high school student in Louisiana.

"When you're a teenager, finding your place can be a little difficult," Meaux said. "I know for me, church was always the place where I felt most welcome and most comfortable, so I'd say that's where my call really began, was how I spent my life in the place that I feel safest."

Meaux said she "gave up the call" to ministry during college; then, while filling out an application for law school in 1996, one question helped her make that final decision.

"It was 300 words or less: 'Why do you want to be a lawyer?' Meaux said. "And my response was, 'Well, my adviser says that's a good job' -- so it became pretty clear I needed to move back home and pursue the path to ordination."

As a chaplain in two schools in Louisiana, Meaux said her call became "really rooted in the sacraments," which as a nonclergy member she could not consecrate.

"In the Episcopal Church, the sacraments cord our life together," she said. "I really could do everything with [the students], I could study the Bible with them, we could talk about Jesus. We could be engaged in the life of our community and serving others, but the one thing I couldn't do with those kids was draw them to the table and celebrate the Eucharist with them. And so that really affirmed my call to ordination in the physical church."

Episcopal parishes typically call a rector to lead their congregation with the consent of their bishop; leaders of diocese-seated cathedrals are deans, a title a bishop bestows to the person becoming rector.

The cathedral is also a resource for the diocese, which comprises Arkansas. According to Bishop Larry Benfield, the Episcopal Diocese of Arkansas comprises 55 congregations, approximately 30 of which have a full-time priest. She joins the ranks of no fewer than six female congregation leaders in the diocese, which Benfield said was "a big change from what was happening in the church a generation ago."

Meaux's selection comes after a nationwide, 18-month search beginning with an open call for suggestions and culminating in the selection of a few candidates from which she was unanimously chosen by the cathedral's search committee, 15-member vestry and Benfield after a visit to Little Rock to meet them, tour the church campus and Little Rock.

Rett Tucker, senior warden at the cathedral, said Meaux's 18 years of experience among Episcopal congregations of different sizes grabbed his attention, along with a "remarkably good energy" the new dean and rector carries into leading Trinity, which he said has around 1,000 members.

"She's the type of person that you feel like you've known your whole life," Tucker said. "She's very engaging and I can tell that she engages with anyone ... she's got the ability to do that with all types of different people."

Tucker, 70 and a lifelong member of Trinity, said Meaux will be the seventh rector he has seen come to the cathedral during his lifetime.

"She's got some great experience, knows the South well and has a wonderful family to bring to Little Rock," Tucker said, referring to her husband, Jared, and three children, ages 16, 13 and 7.

"It's a huge privilege; I'm following in a long line of deans who are not women," Meaux said. "I think I said to one of the search committee members, 'Everybody wants a bold leader until the bold leader says, let's go to Jerusalem,' you know? So I feel like they're entrusting me with a time and a moment in history when strong leadership is going to be really important, and I'm really overwhelmed with that trust."

Noting the covenant partnership that the historically white Little Rock cathedral has with the historically black Bethel African Methodist Episcopal Church in the same neighborhood, Meaux said the cathedral wants to continue to deepen the relationships with Bethel's congregation.

"[Trinity] wants ... to raise the voices of that community so that we can be a place where people know we are seeking to be reconciled to one another," Meaux said.

"I believe this cathedral is particularly poised to address things that are happening in the life of the world right now," Meaux added. "How do we connect with our neighbors in a deeper way that breaks down the barriers that divide us ... In particular, how do we do anti-racism work in the downtown cathedral in Little Rock as a way that becomes a model and a safe place for people to come and engage in that work?"

"We are going to have a real challenge in overcoming racism in Christianity and Arkansas," Benfield said. "I'm hoping that Amy is going to be able to come in and give us some fresh perspectives on how we can be a better church that has the ability to see the systemic racism that's existed in the state, and how we as a church can change the way we do things."

Tucker said the cathedral has a history of being progressive. Several LGBT priests have served at Trinity, he said, and two are currently clergy there.

"We've kind of always been at the forefront of these issues, and I think that's a proud part of our legacy," Tucker said.

Benfield has said Meaux will also need to build relationships with people in the parish and the diocese for the next few months that won't be in-person, part of "a set of challenges in doing the sort of work that no dean has ever had to face in the past."

Meaux begins in the new role Aug. 17, and plans to spend the first week gathering staff in virtual meetings to get to know them. Her office -- along with the rest of Trinity -- will remain closed as it has since late March.

"It'll mainly just be lots of Zoom calls, getting to know people ... what kind of strategy do the clergy and the staff here want to have over the next six months to continue to build community and grow together as a team," Meaux said. "I'm really excited about that time because it's a great moment to begin together." 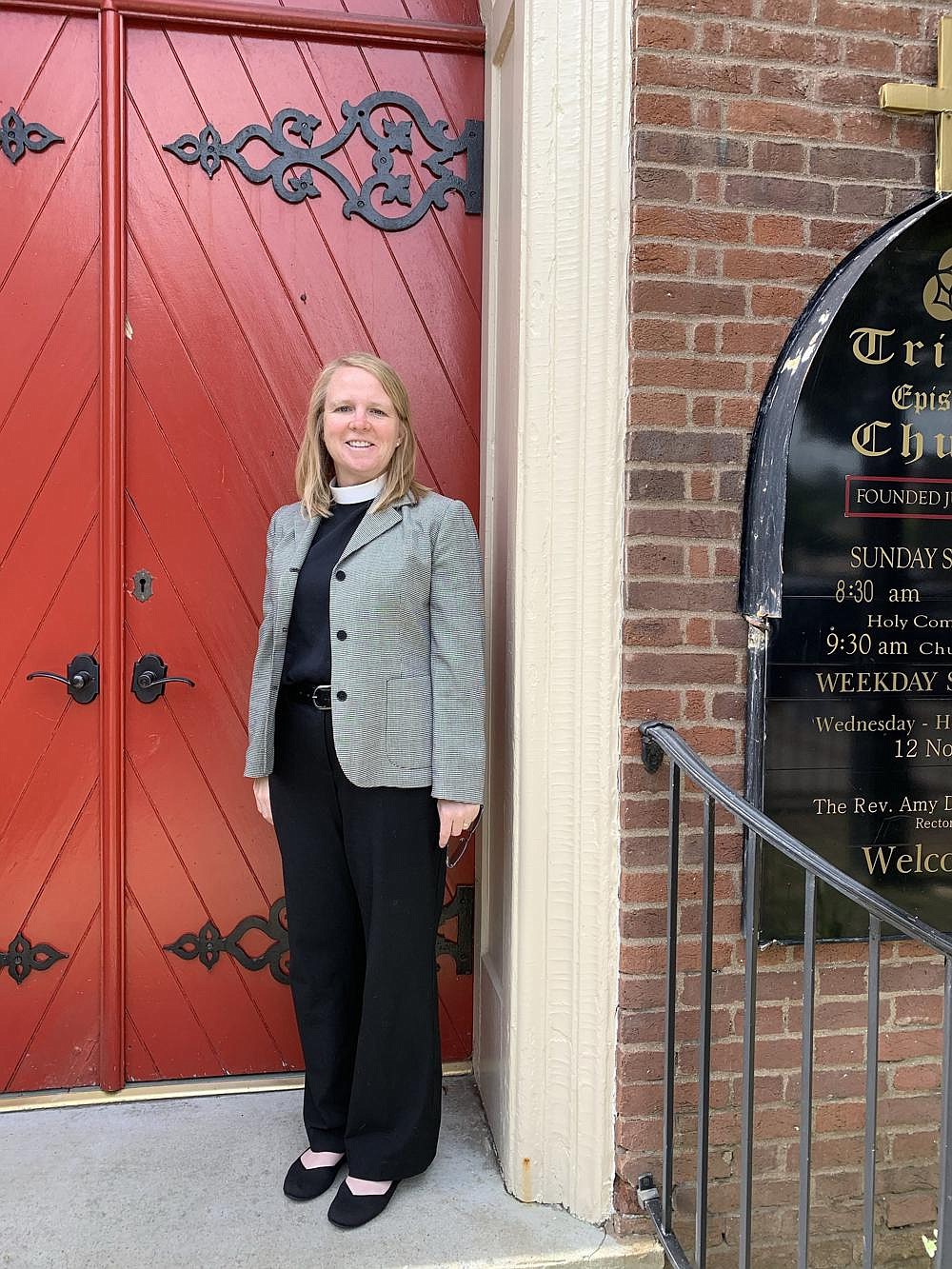 Rev. Amy Dafler Meaux stands in front of the red doors of Trinity Episcopal Church in Danville, Ky., on Thursday. Meaux, who has led that congregation for the last nine years, will begin her new role on Aug. 17 as the dean and rector of Little Rock’s Trinity Episcopal Cathedral. (Special to the Democrat-Gazette/Emma Jackson)