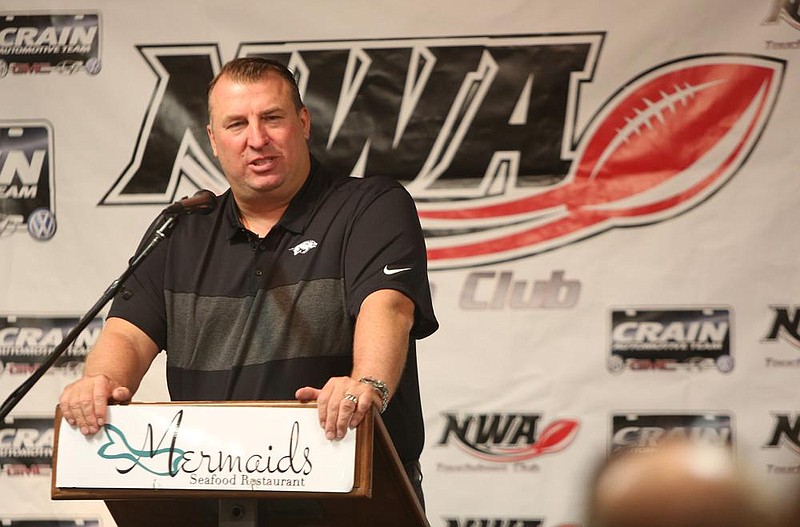 FAYETTEVILLE -- Attorneys representing the Razorback Foundation filed a motion on Wednesday asking a federal judge to dismiss the amended lawsuit lodged against the foundation by former University of Arkansas football coach Bret Bielema.

The 19-page motion to dismiss, composed by lead attorney Marshall S. Ney and the firm Friday, Eldredge & Clark of Rogers, was filed in U.S. District Court for the Western District of Arkansas, where the original Bielema lawsuit was filed, with federal judge P.K. Holmes III assigned to the case.

The motion to dismiss again cites lack of jurisdiction as its basis, as Ney and the Razorback Foundation argue Washington County Circuit Court was required to be the venue to hear any disputes that arose from the release agreement entered into by both parties in January 2018.

Bielema's attorneys, led by Thomas A. Mars, filed a lengthy amended lawsuit on July 3. In that filing, Mars wrote that Bielema intended to move out of state at the time of the release agreement and was "fully aware that the venue selection clause would, therefore, allow him to litigate any disputes in either state or federal court. The choice of venue was material to Coach Bielema, and he relied on it entering into the Final Buyout Agreement."

The wording in Bielema's negotiated buyout agreement stated: "Washington County, Arkansas, shall be the exclusive venue for any action arising under or relating to the Agreement."

Previous contracts between Bielema and the foundation stated Washington County Circuit Court would settle disputes that arose during the buyout period.

The release agreement between Bielema and the Razorback Foundation stipulated Bielema was to be paid up to $11.935 million to settle his buyout, subject to offsetting mitigation, through December 2020.

The foundation stopped paying Bielema after January 31, 2019, claiming breach of contract and demanding that he repay more than $4.5 million in monthly payments he had already received. The foundation maintains Bielema did not abide by the release agreement's affirmative duty to mitigate requirement.

The foundation claims Bielema did not seek a job that would pay him more than $150,000, which was his salary exempt from mitigation during the first year of his buyout agreement, in the 12 months between reaching the agreement and when the foundation stopped making payments to him.

"Bielema failed to mitigate in 2018 by expecting employers to come to him rather than him complying with his duty to mitigate," the foundation writes.

Bielema worked with the New England Patriots as a consultant and then as a special assistant in 2018. His attorneys claimed he was "blindsided" by the foundation's demand for repayment of more than $4.5 million when it notified him it was stopping payments. Bielema was hired as defensive line coach for the Patriots for the 2019 season and took a position as defensive coordinator with the New York Giants in January.

Bielema's attorneys filed their original lawsuit against the Razorback Foundation in June, demanding $7.025 million in compensatory damages, as well as punitive damages, attorney's fees, court costs and a jury trial.

The Razorback Foundation's relationship with the UA athletics department is another central issue in the dispute.

Bielema's attorneys claim it is so intertwined with UA athletics that it acts as an arm of the department. Attorneys for the foundation disputed that claim in their original motion to dismiss, but argued the 11th Amendment would prevent a federal court from hearing a case like Bielema's if the allegation was true.

In their amended lawsuit, Bielema's attorneys wrote the foundation, not the UA, is the real party of interest in the case.

In Wednesday's filing, the foundation maintains the federal court lacks jurisdiction in the matter.

"In short, Bielema's knee-jerk, about-face attempt to try to keep his case in federal court is undermined by the position he has taken publicly for months and cannot remedy the jurisdictional flaws in his initial complaint," the foundation writes.