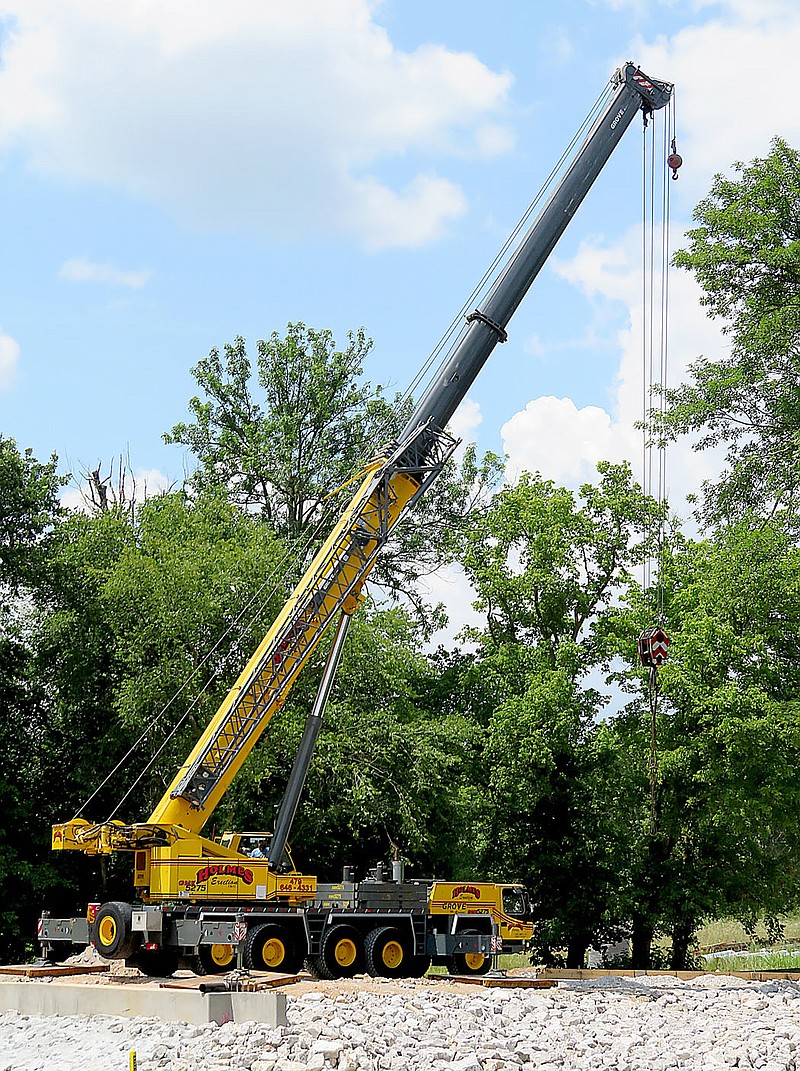 Westside Eagle Observer/RANDY MOLL A large crane was in place on the north side of Flint Creek on Monday in readiness to place bridge supports.

GENTRY — The City Council on Monday night passed a resolution recommending the wearing of face masks in all public places where it isn’t possible to practice social distancing.

It also set a 25 mph speed limit on portions of Dawn Hill East Road and restricting the use of engine brakes in the city.

Following guidance from the governor’s office and the state health department, Gentry “strongly encourages all residents and visitors to wear face coverings in businesses, workplaces, retail stores, places of worship, schools, healthcare facilities, other people’s homes, and any other indoor or outdoor environment where they are exposed to non-household members and a physical distance of six feet or more between persons cannot be assured,” the resolution states.

While there are no penalties, it states local law enforcement officers “shall educate and encourage members of the public who decline to wear face coverings regarding the Department of Health guidance on the efficacy of wearing face coverings.” Police officers are also authorized to assist business owners in removing non-compliant individuals from business premises if the business owners require face coverings.

The council set the speed limit on portions of Dawn Hill East Road in the city to 25 mph. The speed limit was set for the westernmost portion of the road within Gentry northeast to the road’s junction with Marion Lee Road. The speed limit matches the speed rating for the new bridge being constructed over Flint Creek which is scheduled to open Aug. 21.

The council also prohibited using engine brakes in the city except in the case of emergency. Fines can be up to $250 for a first offense and up to $500 for second and subsequent offenses.

Tabled until August was a proposal allowing golf carts on city streets. The proposal allows golf cart on city streets if the driver is at least 16 years old and obeys all traffic laws, yields to all motor vehicles, avoids obstructing traffic and has a reflective caution triangle on the rear of the vehicle. A driver’s license would not be required.

Golf carts wouldn’t be allowed to be operated at night unless equipped with operational headlights, brake lights and turn signals, according to the proposal. While the carts may be driven across a state highway, they may not be operated on any state or federal highways or highway spurs in the city.

The ordinance was proposed to make it easier for elderly residents to travel around the city, do their shopping and run errands without the expense of running a licensed motor vehicle.

The council tabled the proposal until next month’s meeting because of concerns about safety and liability in the event of accidents. Suggestions included raising the minimum age to 18 or to 21 so drivers could be held liable in the event of accidents and to keep younger drivers from using golf carts to go to and from schools on busy streets. Other concerns included wearing seatbelts and limiting passengers to the manufacturer’s seating designs.

The council approved change orders to the Dawn Hill East Bridge project and to the water line moving project at the intersection of Arkansas 12 and 43.

The $14,400 change order on the Dawn Hill East bridge was to repair a concrete driveway at Fisher Circle related to moving utilities. Though most of the cost will be paid by the Arkansas Department of Transportation, the city was required to authorize the change order since the project is a joint project with ARDOT.

The second change order related to cost of materials in the project that must also be approved by the Arkansas Department of Transportation, with the state agency paying 82.38% of the cost.

The council approved buying 0.13 acres for $1,500 from Robert and Wanda Meyer to improve the Pine Avenue lift station.

The council authorized applying for an Outdoor Recreation matching grant from the state Department of Parks, Heritage and Tourism to help in constructing park facilities. The proposal was to apply for a grant for the splash pad in the city park which can be completed before the next grant application deadlines to allow application for grant money next year to help with other park projects.

The council accepted a $113,091 bid of Diamond C Construction Company to build a pedestrian bridge over the spillway at the Flint Creek Nature Park. The Arkansas Department of Transportation will also have to approve and accept the bid before construction can begin.

Randy Moll may be reached by email at [email protected] .