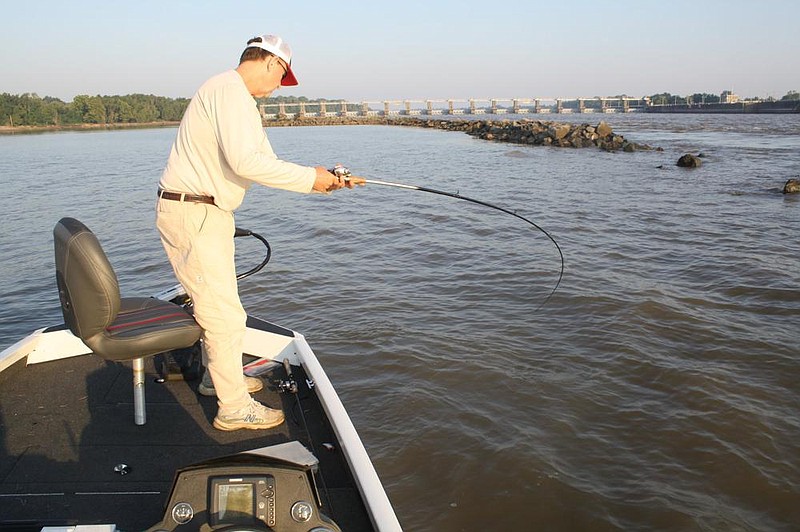 Retrieving square-billed crankbaits through gaps in revetments caught largemouth bass on the backwater side and white bass on the river side. (Arkansas Democrat-Gazette/Bryan Hendricks)

The difference between beginner fishing and master fishing is specificity and precision.

Beginner tactics are general. Use a generic technique in a broadcast fashion in a certain area at a certain time of year. The pattern is time tested, and you will get a few bites.

Pay attention to where, when and how you got those bites. How deep is the water? What is the water temperature? What kind of cover or structure is nearby? Is it windy or calm? What is the wind direction? Is it overcast or cloudy? Is it morning, evening or midday? What is the moon phase? What are the barometric readings?

Put all those things together, and you are on your way to putting together a master fishing pattern.

For example, experienced anglers know that bass fishing in the upper portion of Lake Hamilton is usually poor, and few anglers bother fish the lake's headwater. On the other hand, it can be outstanding at times. You can luck into the outstanding times or you can plan them.

During the 2005 Forrest Wood Cup, Dean Rojas was one of the few competitors that fished in the upper part of the lake. His signature tactic at that time was retrieving soft plastic frogs over shallow cover. Upper Lake Hamilton has a lot of shallow cover in the form of deep and shallow grass beds. For the first couple of mornings during the tournament, hydropower releases from Blakely Dam created current that stimulated bass to feed. The plastic frog was made to order, and it kept Rojas in contention until late, when the current stopped and killed the fishing. Overall, the pattern seemed too inconsistent, and nobody gave serious thought to winning a major tournament in the upper part of the lake.

That changed during the 2019 Forrest Wood Cup when anglers discovered that the upper part of Lake Hamilton has multiple layers. When current comes from Blakely Dam, it positions bass in the eddies behind structures that break current, including rocks, docks, downed trees and retaining walls. They hide behind the structures to escape the current, and also to ambush prey. They will feed for as long as the current runs, but when the current stops, the activity stops immediately.

Alan McGuckin, who works for a media agency that publicizes some of the Bassmaster Elite Tour's major sponsors, is an accomplished bass angler. I met him when he was the promotional manager for Terminator Titanium Spinnerbaits, and we did a couple of articles together for Bassmaster magazine. One was about fishing Oklahoma's Verdigris River.

Primarily a navigational waterway, the Verdigris River does not have much natural current because of its lock and dam system. In this way it is similar to the Arkansas River. In the summertime, current occurs only when a barge locks through one of the dams.

In a still, sweltering backwater, McGuckin and I sat in his boat at the mouth of a cut between two mud islands. The water was still and lifeless. It's color was that of weak chocolate milk.

Suddenly, water swirled around the island points as it poured through the cut. Using a black/blue jig with rattles in the plastic trailer, McGuckin caught a trio of 3- and 4-pound largemouths in almost as many casts. The activity lasted about 5-6 minutes, the amount of time it takes for a barge to lock through a dam. Though we were far from the nearest lock, we knew the instant the gate closed because that's when the current stopped. We fished that way for a couple of hours for a grand total of about 10 minutes of activity, but McGuckin made his point.

We spent the rest of the day fishing bankside cover on the main river. We caught a few 12-inch bass that way, but it illustrated McGuckin's point. To catch the quality of bass that makes a trip worthwhile, current is everything.

George Cochran, a two-time Bassmaster Classic champion and winner of the 2005 Forrest Wood Cup, renewed the illustration with a trip on the Arkansas River in August. Because of recent rains in Oklahoma and Kansas, the McClellan-Kerr Navigation System was swollen and the dams were open, creating massive flow-through current.

Cochran likes to fish a system of backwaters in those conditions. Current surges through the backwaters, but it is not as swift or as violent as in the main river. It eddies around revetments, cooling and aerating the water and creating all kinds of places for bass to ambush prey. We fished the points of every revetment and also cuts between the revetments. Every fish we caught was at least 3 pounds.

Most of our fish bit Texas-rigged Rage Tail worms on baitcasting rigs rigged with heavy monofilament line. We used square-billed crankbaits to fish the cuts connecting the backwaters with the main river. The eddies were dramatic there, and current surged through the cuts. We caught largemouth bass on the inside edges of the cuts and magnum size white bass on the outside edges.

We left that spot and fished several other current breaking structures downstream. Though not as distinct as those at the first stop, they functioned identically by creating eddies that provided bass refuge from the current, as well as ambush cover. We worked that pattern all the way back to the launch ramp, covering a distance of about four miles. Cochran caught the last fish about 100 yards from the ramp.

Knowing how, when and where to fish current in the summer is a major progression from novice angler to master. Of course, it helps to have a couple of masters to show the way.

Third in the Masters Fishing Series 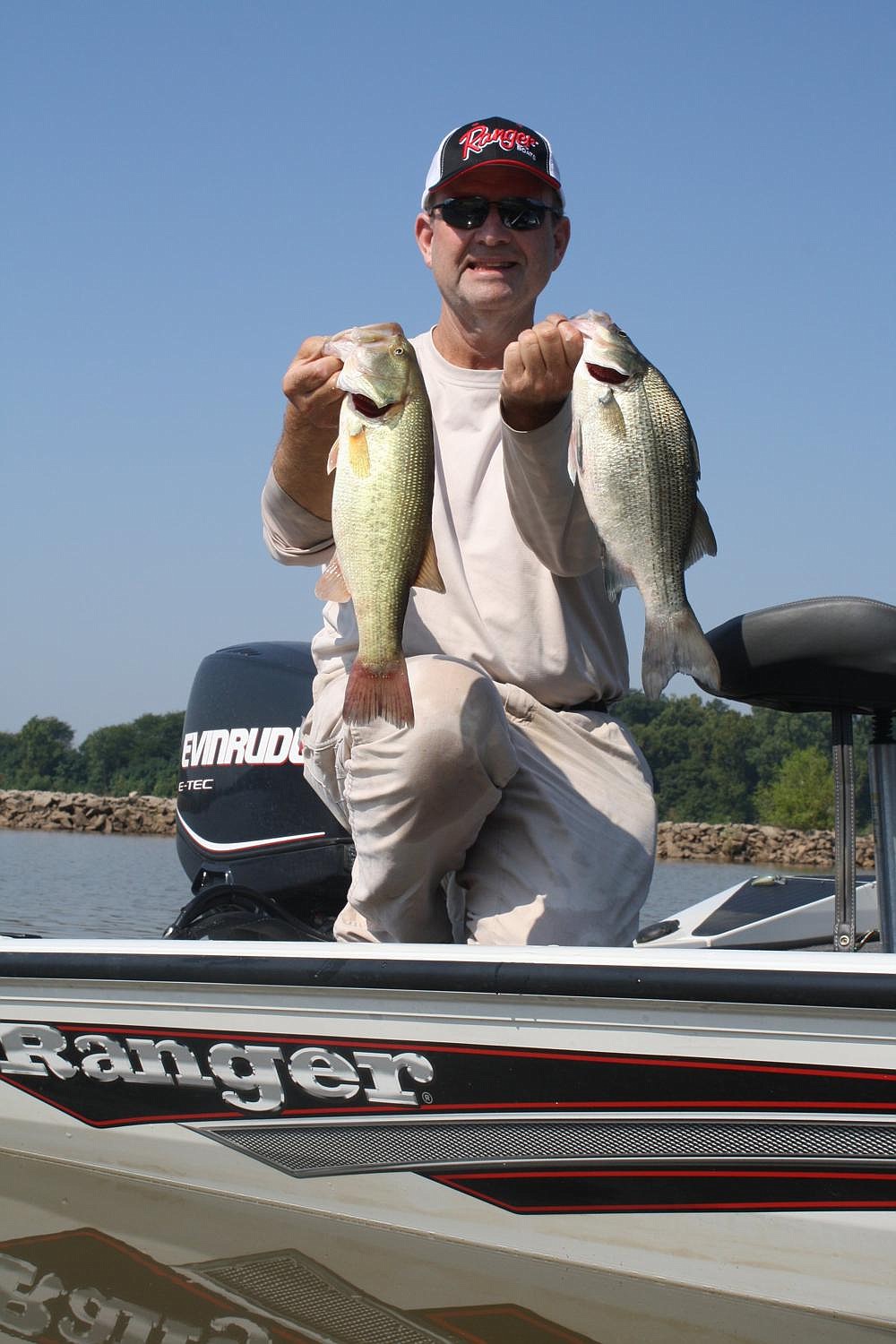